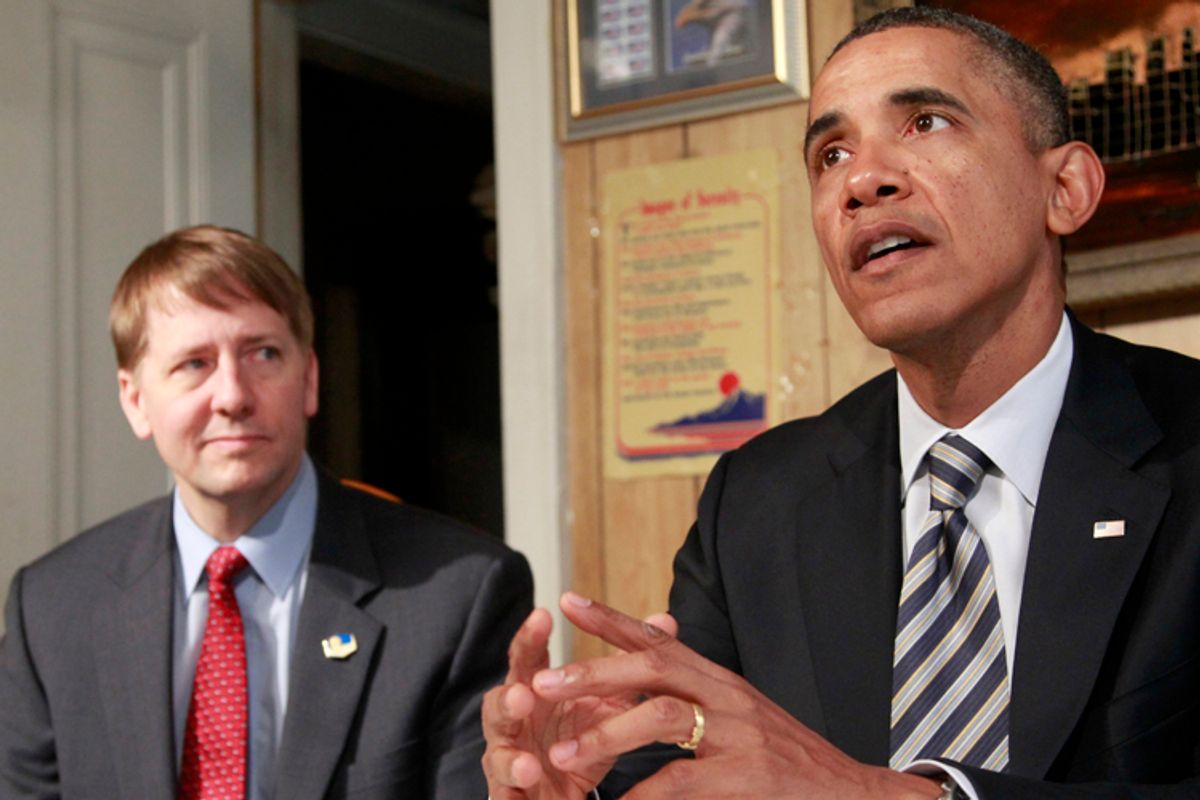 President Barack Obama, accompanied by Richard Cordray, speaks during his visits with William and Endia Eason, not pictured, Wednesday, Jan. 4, 2012, at their home in Cleveland, Ohio. (AP/Haraz N. Ghanbari)
--

Republicans immediately denounced the move as " an extraordinary and entirely unprecedented power grab" that "would have a devastating effect on the checks and balances that are enshrined in our constitution." The GOP's ideal solution is to nullify the CFPB from existence, and Obama is refusing to accommodate them. So liberals are cheering. The Corddray appointment is a smart move. No matter how pissed off the GOP gets, it is difficult to imagine that the current state of political gridlock could get any worse. Meanwhile, with one swift decision, Obama has encouraged his own base, continued to double down on his recent populist emphasis, and signaled that while Republicans bicker their way through a primary fight, the president is going to govern as he sees fit. He's also standing by one of the signature pieces of legislation passed in his term, the Dodd-Frank bank reform bill. That's all good.

Republicans are particularly annoyed because Obama has decided to ignore GOP maneuvers designed to pretend that the Senate had never technically gone into "recess" long enough to allow a recess appointment. The administration effectively said "neener, neener": we don't care what you say, we're making our appointment anyway. Partisans will decide for themselves which party has made more of a mockery of constitutional checks and balances, but there's probably even good legal justification for Obama's move.

But if you're wondering just how wild and reckless Obama is acting, a review of the facts is eye-opening: Cordray marks only Obama's 29th recess appointment, which puts him far, far behind every president since Ronald Reagan. George W. made 171 such appointments, Clinton made 139, George H. W. made 77, and Reagan made a whopping 243. In the face of an opposition party more determined to block the agenda of a sitting president than any we can recall in living memory, Obama has been by far the most restrained chief executive in response.

That's hardly an unprecedented power grab. A more accurate description might be "dereliction of duty."

Because while the appointment of Cordray, a solid consumer advocate who will likely be a good leader for the CFPB for the one or two years that his term extends, is a move to applaud, the very fact that it's a no-brainer makes it all the more regrettable that it took the pressures of a campaign in Obama's fourth year of office to force the president to start displaying a backbone. The public clearly likes an aggressive Obama; his presidential job approval numbers have been ticking up ever since he abandoned the pretence of (unworkable) bipartisan compromise. Long before this point, Obama should have been making recess appointments to the Board of Governors of the Federal Reserve and he should have been raising non-stop hell over GOP obstruction to his judicial nominations. He should have been far more aggressive in calling repeated GOP government-shutdown bluffs, and far more willing to use his veto powers.

One is even tempted to say that if Obama had really wanted to pick a fight he should have named Elizabeth Warren director of the CFPB in a recess appointment a year or more ago. But we're having a lot of fun watching the feisty Oklahoman go for a Senate seat in Massachusetts so we'll give him a pass on that one.

And all things considered, it's encouraging to see liberals who have long been grumbling at Obama heartened by the latest move. We're not even a week into 2012, and the administration is acting feisty. Please, sir, can we have some more?