The complete failure (and unnoticed success) of Occupy Iowa Caucus 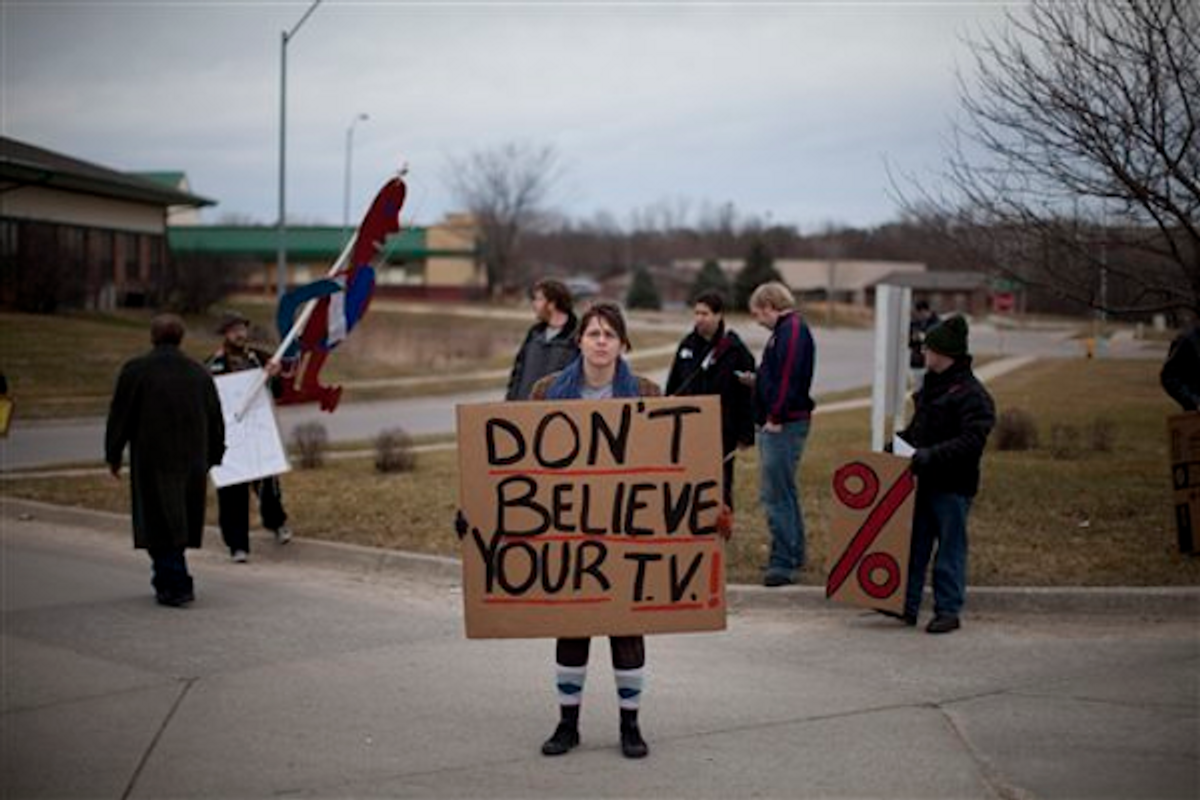 Occupy's message for the Iowa caucusers
--

Greetings from the tony headquarters of the Democratic National Committee's caucus war room, located in the historic Renaissance Savery Hotel, which also briefly became Occupy Iowa Caucus' tony headquarters on Monday afternoon. It was one of its last significant occupations this week before the Iowa presidential caucuses picked Mitt Romney by the slimmest of margins as the Republican candidate to beat.

Outside the hotel, the Des Moines cops, who have all started to look pretty familiar, wandered stone-faced through a gaggle of frigid demonstrators while MSNBC host Joe Scarborough schmoozed with the riffraff. Inside the lobby, a couple dozen occupiers' bodies were piled atop each other during a silent "die-in" soundtracked by torture-bad Muzak and awkward murmurs from the helpless hotel staff.

The idea was that money is killing the democratic process, you see. The Democratic Party didn't particularly feel like receiving this message face-to-face, so the occupiers were once again escorted off in zip ties by the handful, continuing the arrest-lemming tactics they'd executed at candidates' headquarters all week.

"Solidarity!" they shouted to one another, then turned to deliver talking points with the surplus national media who seemed to be within perpetual arm's reach everywhere you went in Des Moines.

That was the funny thing about Occupy Iowa Caucus: It was never actually going to try to occupy any caucuses, instead opting to hammer candidates and parties while nudging voters to vote "uncommitted." And if you're looking for tangible measures of the movement's impact this week, Tuesday night's figures were tepid.

Percent of "uncommitted" votes cast out of the total: negligible. Number of rich eaten: zero.

"If anybody thought they were going to change things this week in Des Moines, I think you've overstated your goals," Frank Cordaro, 60 and a lead organizer, told an increasingly frustrated group of occupiers during a contentious planning session early this week. They were the occupiers who gathered every morning to figure out where they wanted to get arrested in the afternoon, and things often got messy.

They were a press-conscious bunch. Everybody was tired of hearing stories about how unfocused they were. Yet there they were, arguing that the day's message was about money in politics, no, the National Defense Authorization Act and global American hegemony, no, both! "There's no discipline!" progressive Iowa radio host and fellow occupier Ed Fallon pleaded with them. "We need discipline! I don't see it there."

Counting votes would be the wrong way to measure the effectiveness of this effort. The group was never going to persuade Iowans to capsize their beloved first-in-the-nation nomination process by voting "undeclared" en masse in an important election year; it was too small, its messaging too scattered. Some liked parts of Ron Paul's message but they wouldn't embrace him as a messenger.

Yet if you examine other metrics, the movement did its part. The real success of the broader Occupy movement thus far, after all, has been its ability to propagate and adapt as it metastasizes from city to city like -- pardon the analogy -- a cancer, for which the real threat to a system's vitals isn't one particularly big cell but an agglomeration of them autonomously multiplying all over the place. By that standard of measure, Occupy Iowa Caucus was part of the Occupy Wall Street movement's organic success: just follow the political reporters eastward next week.

"We didn't have any contact with Occupy Iowa [Caucus] to see what they're doing, but we've been keeping an eye on them," said Wyatt Thurston, 23, an occupier who works on the Occupy New Hampshire Primary media team. ("We don't really have 'spokespeople,'" he said, despite acting remarkably like one.) "As far as we can tell, they're not going to be too similar at all."

Thurston says Occupy New Hampshire Primary, a spinoff of the state's general assembly and composed of at least 10 different Occupy groups, will focus more on preplanned events at Veteran's Park in Manchester, from Jan. 6 to Jan. 10 rather than generating huge piles of arrests outside random campaign headquarters.

"Certainly their approach is a valuable one," Thurston said of Iowa, "but because of how big we're trying to be, we're trying to make this as open to as many people as possible, so that's the direction we've set it in." He had a fatalist outlook on the upcoming primary, which, as in Iowa, the group swore it would not disrupt: People will vote the way they'll vote, Thurston said, and so the goal is education rather than persuasion.

The occupation movement is slowly inching away from the permanent occupation of public spaces in favor of temporary, more closely targeted actions -- halting home foreclosures, blocking ports, and now, throwing sand in the gears of the presidential nomination process. The verb is still "Occupy," but some of the corresponding nouns are slowly shifting from general to specific, migrating from "parks" to "politicians." That would be a welcome sign for those who've gotten uncomfortable with increasingly ragged camps nationwide.

Occupy Des Moines, the caucus group's parent movement, has continued to exist as a couple dozen tents in a bland, sleepy park a couple of blocks from Iowa's vaguely Kremlin-like state Capitol. That occupation's relevance here over the past two weeks has paled next to its more dynamic, aggressive progeny operating out of a former bar a few blocks away.

"It's a very unusual cast, a hard cast to organize," Fallon told me when we talked at the camp earlier this week. Iowan occupiers need to have a "come-to-Jesus talk in which they decide what the movement is going to look like," he said, and he believes the continuation of the camp is important as a symbol.

Those will be tough discussions. But for the time being, at least for the night of the caucus, the occupiers were blissed out by a sense of accomplishment plus a few rounds at the next-door bar, drinking like war heroes at the Underground and trapped somewhere between exhaustion, happiness and an addiction to hell raising. Nobody was seriously paying attention to the climactic Republican primary extending late into the night. They were fixating on where 1-percenter Mitt Romney was having his sweet hotel party.

"I could get in!" Jess Mazour, 24, said, unspooling an impish and inexhaustible grin despite having barely slept over the past few weeks.

"Shit," replied Jess Reznicek, 30. She'd already infiltrated and gotten ejected from an invite-only Romney event that night, and had seen her share of the cops over the past week.

Matt Pearce is a contributing writer for The Los Angeles Times, The New Inquiry, and The Pitch in Kansas City. You can follow him on Twitter at @mattdpearce.