The mess Iowa just made

A virtual tie between Romney and Santorum, with Paul close by. And if you think New Hampshire will add clarity ... 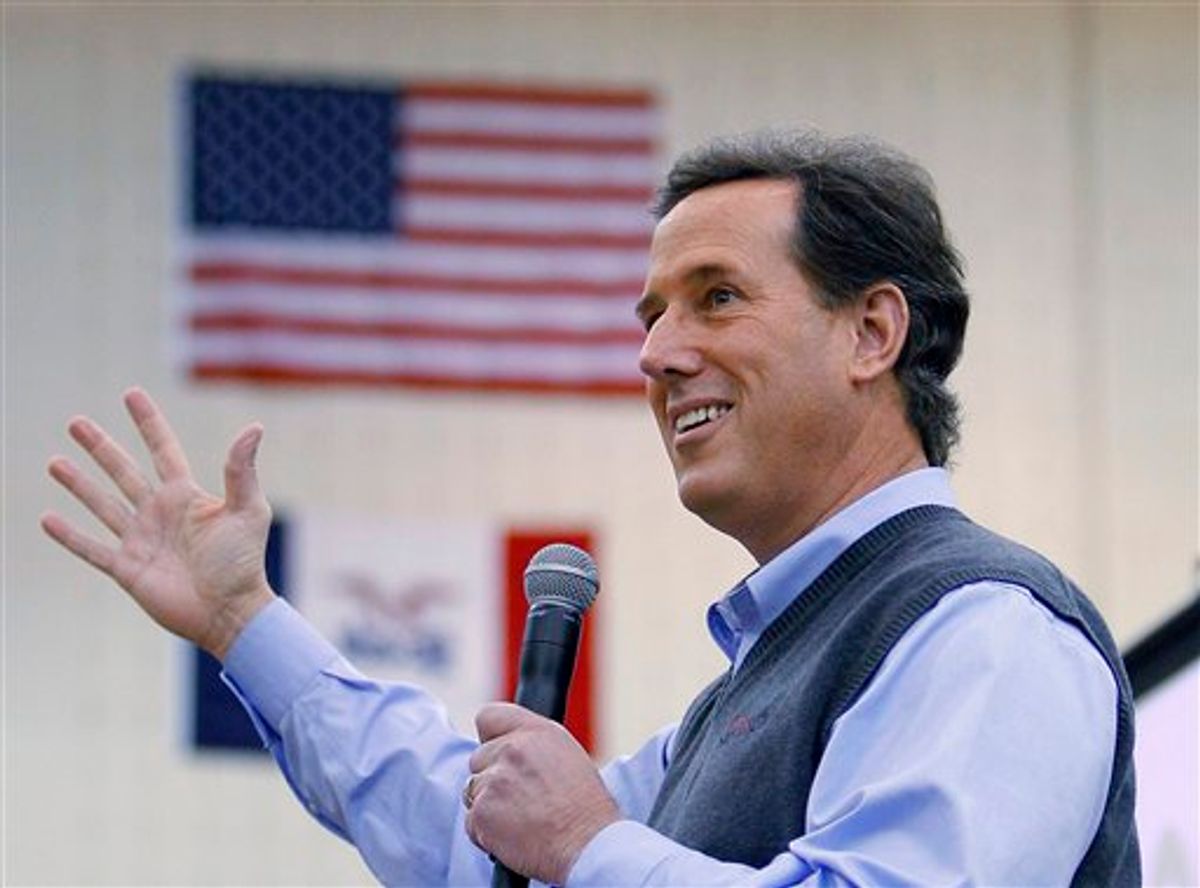 There were some clear and obvious losers in Tuesday night’s Iowa caucuses, but if you want to accurately declare a winner it would have to be “To be continued.” With 98 percent of precincts reporting, Mitt Romney was sitting on a 41-vote lead. He may or may not hold onto it when the final tallies are in, but it doesn't really matter.

If Romney does prevail, it will be by the tiniest of margins and with just 24 percent of the vote -- the lowest number ever for an Iowa GOP winner. This doesn’t tell us anything we didn’t already know about Romney, who has been almost comically unable to break through the 25 percent barrier in national and key (non-New Hampshire) early state polls. So the question of how far the party base is ready to go in order to keep him from winning the nomination remains.

This makes Rick Santorum, who finished in a virtual tie with Romney, just as much a winner, because he now has an opportunity to portray himself to all of the party’s Romney-resisters as their last, best chance to avoid their worst nightmare. Santorum’s main challenge in Iowa was to deny Romney a clear victory and to create significant distance between himself and the other candidates – namely, Newt Gingrich, Rick Perry and Michele Bachmann – who also want to serve as the consensus non-Romney candidate. He achieved that.

And then there’s Ron Paul, who posted his best showing ever in a major primary or caucus, with jarringly strong support from voters under 30 years old. But as impressive as it was, Paul’s showing does nothing to alter the perception that he faces a uniquely low and firm ceiling within the Republican Party because of his unorthodox positions on a host of issues that are very important to a wide swath of the GOP electorate.

The losers are obvious: Gingrich, Perry and Bachmann, none of whom managed to defy their final pre-caucus poll numbers and challenge Santorum for the role of leading non-Romney candidate.

This will apparently be enough to flush Perry from the race, with the Texas governor – who finished in fifth place with just 10 percent – using his concession speech to announce that he will return to his home state and reassess his candidacy. Bachmann, who completed her epic fall from the heights of an Ames straw poll win by finishing behind Perry, may soon join him on the sidelines, though she offered no clues in her speech. But Gingrich, who grabbed 13 percent to finish fourth, is vowing to press on and to confront Romney forcefully in the next contests.

New Hampshire probably won’t resolve much. It’s Romney’s second home state, he’s enjoyed lopsided polling leads there for the whole campaign, and its GOP universe is far more secular than the national Republican Party, and thus not very representative. With the momentum he’ll enjoy, Santorum’s numbers in the state now figure to surge and he may end up posting a surprisingly strong showing. But if Romney wins comfortably, it still won’t tell us anything we don’t already know about him and the GOP race.

South Carolina, which will vote on Jan. 21, should be a far more critical test for both candidates. The state is a haven for Tea Party conservatism and evangelical Christians and Romney managed to win just 15 percent there in 2008.

Simply put, it will be a must-win state for Santorum, whose chief task between now and then is to gobble up as many Perry/Bachmann/Gingrich supporters as possible. In this sense, Perry’s apparent departure is a big boost to Santorum, just as a similar decision from Bachmann would be. Gingrich’s enduring presence could be problematic, although Gingrich’s spite-fueled determination to tear down Romney in debates and television ads might also boost Santorum. If he can defeat Romney in South Carolina, it will reinforce the sense that the GOP base badly wants to stop Romney, fuel Santorum with even more momentum, and provide him with a chance to become the GOP front-runner with a follow-up victory in Florida on Jan. 31.

Conversely, Romney could become the almost inevitable nominee with a South Carolina victory, since it would demonstrate an ability to win over the voters who have been most resistant to him and to face down a strong challenge from a consensus conservative alternative. Romney’s two best weapons will be the lingering presence of Gingrich (and Bachmann, if she sticks around too), which could complicate Santorum’s push to unite the right; and the massive money of his SuperPAC allies, which helped crush Gingrich in Iowa and may now be directed against Santorum. With a win in South Carolina, Romney would be ideally positioned to win Florida at the end of the month and to compel influential Republicans to endorse him and put an end to the process.

Paul, for his part, remains a wild card. New Hampshire's libertarian bent could offer him a chance for another impressive showing next week, and his campaign has a strategy to gobble up delegates in small-state caucuses next month. His major test, which may or may not ever come, will be what happens when he scores a truly breakthrough victory – one that makes the possibility of him grabbing the GOP nomination real. At that point, virtually all of the GOP’s opinion-shaping class will turn its guns on him, a larger-scale version of what panicked party elites did to Pat Buchanan when he won New Hampshire 16 years ago. Only then will we find out if Paul’s ceiling is any bigger than it now seems to be.