A better sex life is a New Year's goal that many have but few talk about -- well, except here 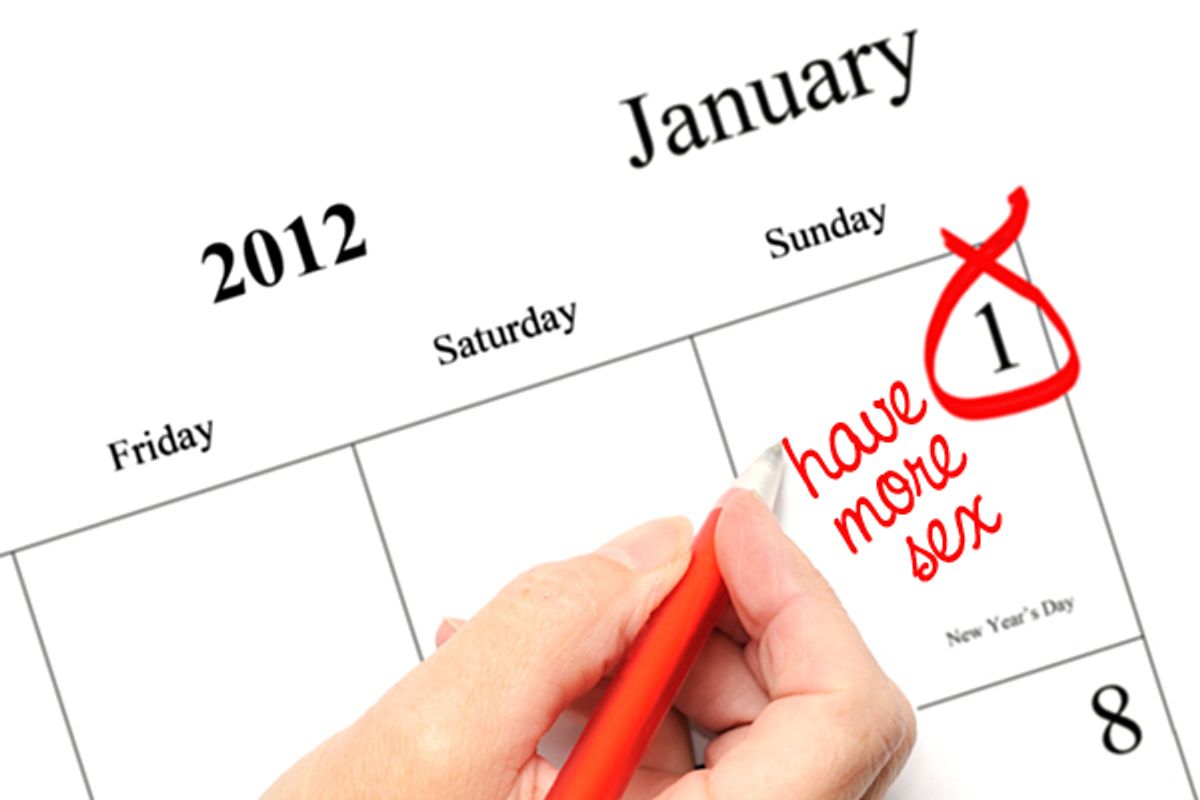 Sex is the unwritten New Year's resolution. We may openly dish about plans to lose weight, work out or eat better – in part so that others will keep us accountable – but it's not so with goals about our sex lives, even though those are just as common. So I took the early days of this New Year as an excuse to ask about people's previously private sexual resolutions (not that I ever need an excuse to pry, let's be honest).

Some are just hoping to break a dry spell. "Margaret," 35, tells me, "I spent almost all of 2011 trying to emotionally recover from a devastating and generally ill-advised hookup with a friend," she says. "I know, it sounds overblown, but trust me, it was a huge mess. I haven't so much as made out with anyone since 2010!" She devoted the past year to her mental health through therapy, meditation and distancing herself from this "toxic" friend-turned-hookup. Now her plan of attack is to get physically healthy, occasionally dress up all sexy-like and generally, as she puts it, do some "woo woo 'putting myself out there' type of stuff." Surprisingly, I didn't come across anyone who was already having sex and simply wanted more of it -- but I did find countless articles and blogs encouraging married folks -- OK, married women -- to resolve to get busy more often.

Of course, "sex" doesn't always translate to "orgasms" (and "orgasms" don't always mean "partnered sex"). In response to my call for sexual resolutions, Kayt Sukel, a 37-year-old writer, tweeted her to-the-point goal, "I resolved to have more orgasms." She started researching the science of climaxes for her new book, "Dirty Minds: How Our Brains Influence Love, Sex, and Relationships," and realized "just how darn happy people who are having regular orgasms seem to be." She resolved to become one of those people: "Of course, I got busy so then I joked about it being my New Year's resolution. But the more I joked about it, the more I thought, why the hell not?" Sukel, who is newly divorced, tells me, "Like exercise or a healthy diet, I think it’s something I need to do for myself whether or not a partner is in the picture."

On the other end of the spectrum, too much sex becomes a problem for some. "Heather," 32, has resolved to not have sex right at the start of a relationship. She tells me in an email: "I want to wait at least, MINIMUM, one month." This resolution came about because she recently realized, "In my entire adult life I have never waited to sleep with anyone," she says. "Combine my willingness to jump into the sack with my nice-girl syndrome of trying to make things work out and you get disaster. I end up with men who are emotional barnacles." Further endearing herself to me, she adds, "I say this tongue in cheek, but if the Mayans are right, I don't want to spend the apocalypse in bed with a man who is more interested in video games and what's happening on Boing Boing than me." (I don't mean to weaken Heather's resolve or anything, but I made the same resolution last New Year's Eve only to within days break it -- with a guy who is now my boyfriend.)

Of course, we can't forget those who have simply resolved to not have sex -- and, no, they aren't all pubescent purity pledgers. An extreme example is Marcel Williams, a 24-year-old DJ at a Canadian hip-hop station who has courted an absurd amount of media attention and congratulations for abstaining from sex for the past year. He decided that his womanizing ways were getting in the way of his career aspirations, so on New Year's Eve 2010, he swore off anything beyond heavy petting for the next 12 months. He says the experience "helped me understand the value of saving yourself for somebody else." (Abstinence advocates hungry for a new spokesperson are no doubt knocking down his door at this very moment.)

When it comes to sex in the New Year, it seems we either want to have more of it or less of it to varying extremes. Numbers on the scale, zeroes in the bank account, notches on the bedpost -- we like to take stock of our lives at this time of year. For most of us, sex -- in its excesses and deficiencies -- is one of the most fundamental measures of personal health and well-being. It's also sadly the case that, as psychology professor Laurie B. Mintz, author of "A Tired Woman's Guide to Passionate Sex," told me, "There are very few sexually satisfied people in our culture." I refuse to end this column on that note, in part because of my own New Year's resolution to write more about the happy, joyful side of sex -- luckily, Mintz has a gem of glass-half-full wisdom for us all: "Most sexual issues can be resolved by giving yourself permission to do what you do, like what you like and get information on it."