His repressive sexual politics are a rear-guard rebellion against modernity 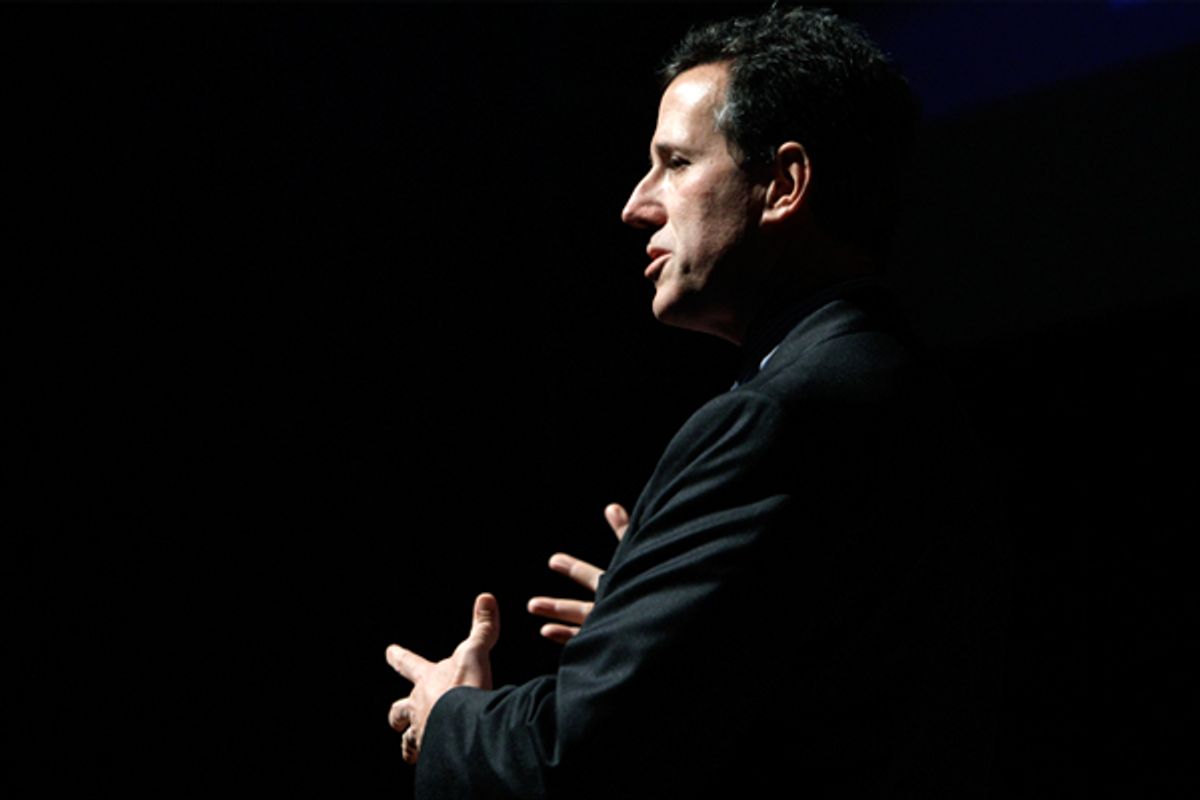 Following his eight-vote near miss in the Iowa caucuses, former Pennsylvania Sen. Rick Santorum is the man of the hour. Many people have commented on his profoundly conservative views on human sexuality. Santorum has clearly supported making abortion criminal and repealing all same-sex marriages, which he once compared to man on dog sex.

Santorum’s sexual policy clock, however, does not stop turning back in 2003 when the Supreme Court struck down sodomy laws or 1973 when the Supreme Court protected abortion. Santorum would turn it all the way back to 1964, when birth control was criminal in many states. Actually, Santorum’s sexual policy prescriptions start in the fourth century, when the Catholic theologian Augustine of Hippo confronted his unruly dick. After years of Gingriching around with every female in sight, Augustine came to Jesus. Despite his newfound commitment to disciplined, godly behavior, he just couldn’t keep the good man down. But he decided that at least he could justify, if not control, his irrepressible sexual desires by confining them to the otherwise consecrated ends of monogamous marriage and the reproduction and rearing of children. The only acceptable sex is marital reproductive sex. All the rest of the Catholic teaching on sex is commentary.

Criminalizing abortion and forbidding gay marriage are still, regrettably, outside the total nutbag category in contemporary American politics. But if the only allowable sex is Catholic-approved reproductive sex, the picture starts to look distinctly weird. Birth control, for example. Santorum has said repeatedly that he would work to overturn the Supreme Court’s 1965 decision in Griswold v. Connecticut, which stopped the states from making birth control criminal. And just in case you’re thinking that’s just to take the pill from those uppity women, the Catholic teaching is quite clear: All artificial birth control is forbidden, including the good old familiar male condom. Indeed, if the only allowable sex is marital sex, fornication and adultery would be similarly acceptable. The same doctrine forbids masturbation.

Sometimes Santorum tries to moderate the extremism of his views on sexual regulation by saying that he thinks the states should decide whether to make sex acts or birth control criminal; his quarrel is with the Supreme Court butting in and telling them they couldn’t throw the Planned Parenthood docs in the slammer. If states do “dumb” things like outlawing masturbation and condoms, the solution should be to elect different state officials. But in fact Rick Santorum doesn’t think criminalizing birth control and fornication is dumb. Consistent with his Catholic faith, he believes all artificial birth control is wrong and that sex outside of marriage is not a healthy thing for the country.

And he advocates the legislation of morality: "(I)f family and moral values break down, government gets bigger and bigger. Social issues are central to every issue we deal with in America. Unless we get the moral issues right, we will never get the economic and foreign policy issues right."

That an advocate of legislating strict Roman Catholic sexual doctrine came within eight votes of winning the first contest for the nomination of one of the two major American political parties warrants attention. Twenty-five years ago, opposition to Griswold helped sink the Supreme Court nomination of Judge Robert Bork. And the country has only become more sexually and gender diverse since then. Six states and D.C. authorize same-sex marriage. The second secretary of state in a row is a female, and she gathered 18 million primary votes in her bid for the presidency. Congress repealed the exclusion of openly gay and lesbian service members from the military. Even Mississippi didn’t adopt a law making two cells a “person.”

In this context, Rick Santorum’s candidacy, and the Republican Party that hungers for it, looks like a handful of the left-behind fighting a rear-guard action against modernity, which has passed them by. It’s understandable that they would focus their efforts on sex, where Augustine struggled so hard for control. Like Augustine and his unruly member, the modern world, especially modern capitalism, makes people feel like they have lost control. As recent events reflect, this is not foolish. They have suffered from forces way beyond their control. But the solution to gaining some mastery over the environment lies in embracing modernity through modern institutions like the rule of law, collective action, proper regulation, counter-cyclical economic policy, rather than rejecting it. There’s a reason modern contraception is called birth control. Control is good. The mistake is in mistaking Wall Street for your dick (or your wife).

Western history since the Enlightenment has been peppered with such revolts against the modern world. Usually they are a sign of desperation and find their way, unassisted, to the dustbin of history. On the rare occasion when they take hold, however, they can be extremely dangerous.