Even when the Texas congressman is right on an issue, it's for the wrong reasons 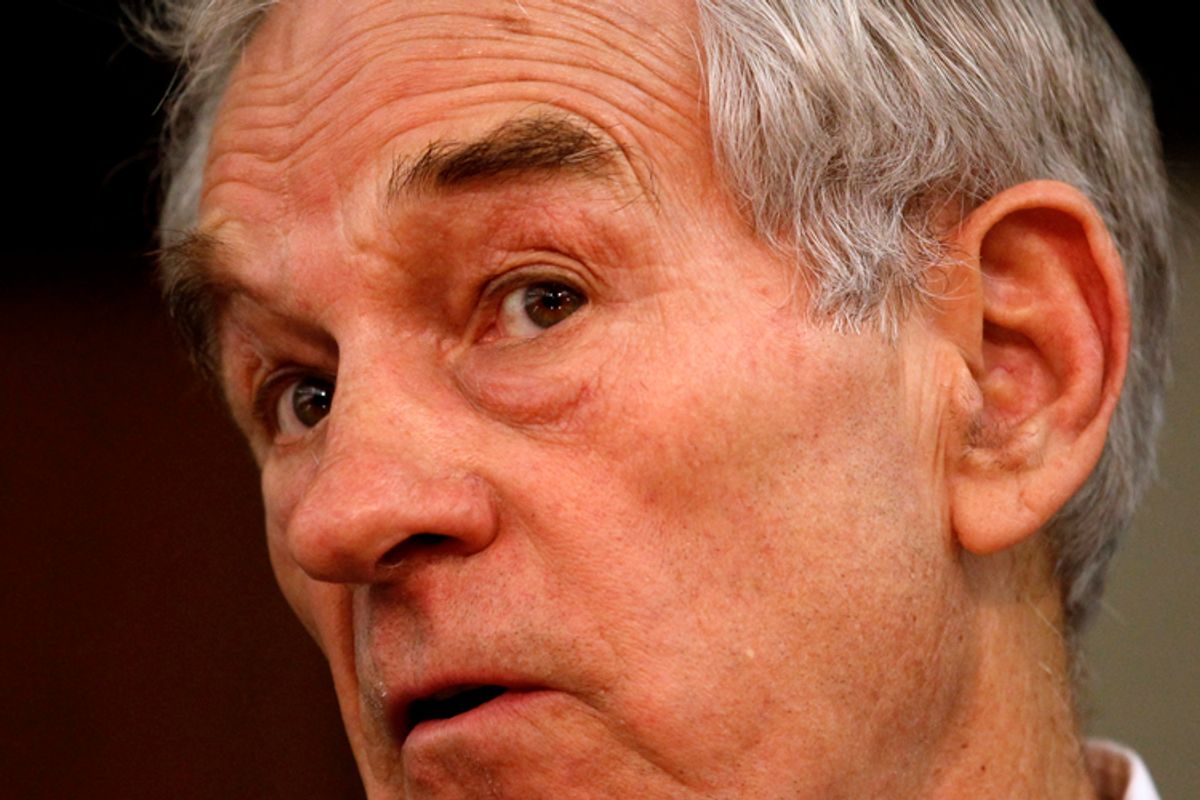 Revolution
Is the affair of logical lunatics.
The politics of emotion must appear
To be an intellectual structure. The cause
Creates a logic not to be distinguished
From lunacy…
-- Wallace Stevens, “Esthetique du Mal”

Let’s start at the starting place. Rep. Ron Paul has no chance whatsoever of securing the Republican nomination, nor of being elected president under any imaginable circumstances. Ain’t gonna happen. Even Newt Gingrich has basically said he’d vote for President Obama over Paul. Given that Newt would probably back Vladimir Putin over Obama -- robust foreign policy, after all -- that’s definitely saying something.

So don’t tell me about Paul’s political courage. It’s easy to be a fearless iconoclast when nothing’s at stake. That said, it was heartening to hear the Texas congressman, during a Fox News-sponsored Iowa debate of all places, stress the similarities between the current “bomb Iran” chorus and the 2003 propaganda campaign that led the U.S. to invade Iraq. Paul dismissed as “absurd” Rick Santorum and Michele Bachmann’s assertions that the Iranian government’s “theology” would lead it to start a nuclear war for the sake of national martyrdom.

"To declare war on 1.2 billion Muslims and say all Muslims are the same, this is dangerous talk,” Paul added. “Yeah, there are some radicals. But they don't come here to kill us because we're free and prosperous. Do they go to Switzerland and Sweden? I mean, that's absurd … The CIA has explained it to us. They said they come here and want to do us harm because we're bombing them."

Actually, Iran and al-Qaida are bitter enemies. Otherwise, Paul’s on target. He also pointed out that the U.S. and Iran haven’t been at war since 1979, as Santorum asserted, but since 1953, when a CIA-sponsored coup overthrew Iran’s elected government and installed the corrupt, dictatorial Shah. For all the current regime’s brutality, that historical grievance is why attacking Iran would only strengthen the Ayatollahs.

It’s precisely such interludes that have led luminaries like Bachmann, Rush Limbaugh and the New Hampshire Union-Leader to declare Paul a dangerous heretic. A bit more surprising is his fan base on the left. “I have big problems w/ Ron Paul on many issues,” tweeted the Nation’s Katrina vanden Heuvel. “But on ending preemptive wars & on challenging bipartisan elite consensus on FP, good he’s in.”

Salon’s Glenn Greenwald went much further. Paul’s “nomination,” he wrote, “would mean that it is the Republican candidate -- not the Democrat -- who would be the anti-war, pro-due-process, pro-transparency, anti-Fed, anti-Wall-Street-bailout, anti-Drug-War advocate (which is why some neocons are expressly arguing they’d vote for Obama over Paul). Is it really hard to see why Democrats hate his candidacy and anyone who touts its benefits?”

Oh please. In as much as Paul’s nomination would also be preceded by signs, portents, graveyards yielding up their dead and lions whelping in the streets, hating him would be rather a waste of energy.

In the meantime, Talking Points Memo overheard candidate Paul warning the citizens of Sioux Center, Iowa, that land use regulations could lead to dictatorship.

“I’m fearful,” he said “because some people would like us to go all the way to the U.N. and have the U.N. controlling our lands, too.”

Black helicopters, anyone? Exactly who these “some people” might be, Paul didn’t say. Of course, some people think space aliens monitor their thoughts through fillings in their teeth. Some people even believe that the U.S. government has installed chemical tracking agents in $100 bills.

Oops, actually that was Dr. Paul himself. A 1993 promotional letter for the militia-friendly “Ron Paul Newsletter,” published the last time a Democratic president provoked apocalyptic fears among Moron-Americans, helpfully explained: “The totalitarian bills were tinted pink and blue and brown, and blighted with holograms, diffraction gratings, metal and plastic threads, and chemical alarms. It was a portable inquisition, a paper ‘third degree,’ to allow the feds to keep track of American cash, and American citizens.”

Send that tainted cash straight to Ron Paul. He’d know what to do with it. Today, of course, the candidate says he neither wrote nor read any of the crackpot ravings in the Ron Paul Newsletter. Not the stuff about how Martin Luther King was a pedophile, how Israeli agents bombed the World Trade Center, about the coming American race-war, or the “federal-homosexual cover-up on AIDS,” none of it.

Sure it was. How could anybody doubt him?

Look, this guy’s no more a Libertarian than I’m a Rastafarian. Even when he’s right, as on bombing Iran, he’s wrong. (Hint: It’s about the Jews.) What he’s got against the federal government is the Civil Rights Act of 1964.