The political power of being naive 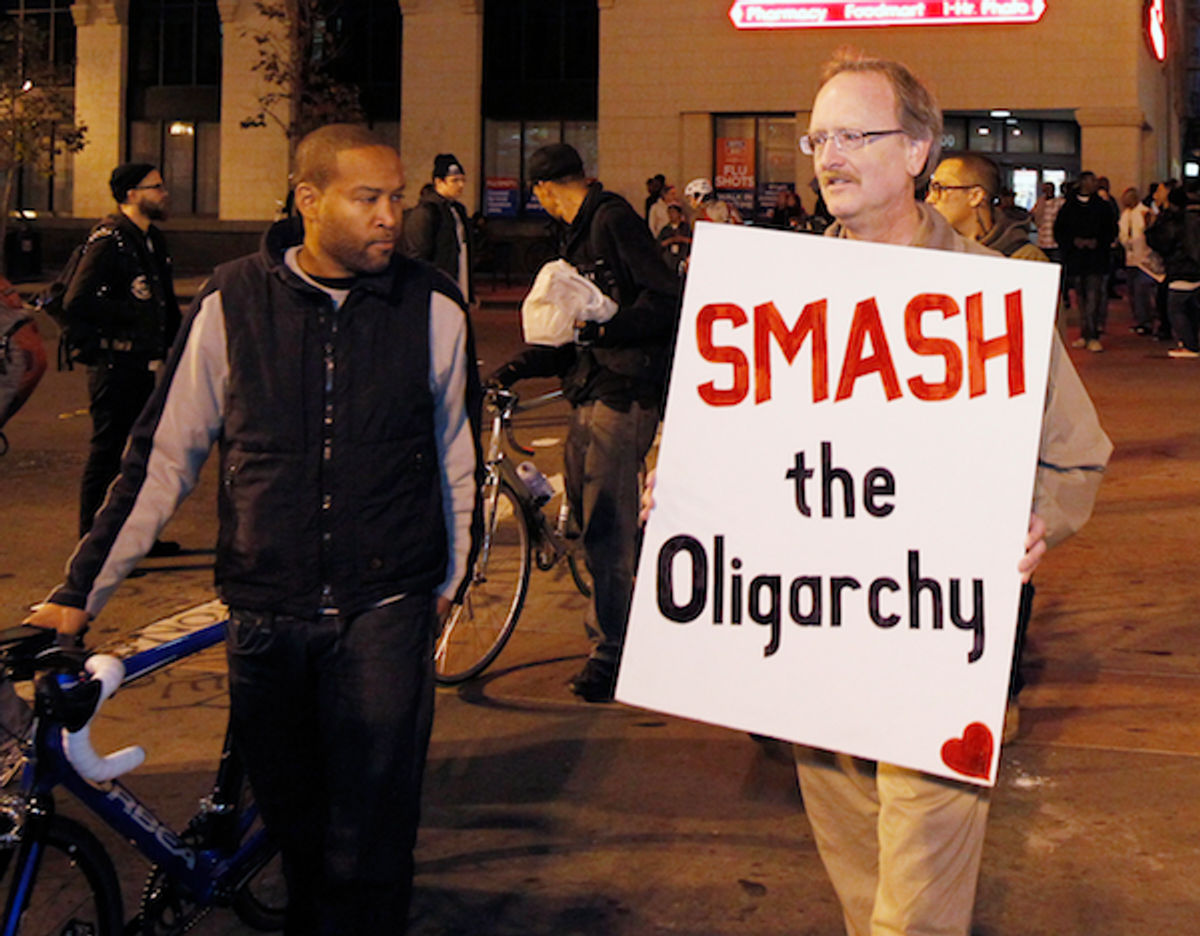 A demonstrator holds up his sign as he marches to City Hall plaza in Oakland, Calif. November 14, 2011 (REUTERS/Kimberly White)
--

My resolution for 2012 is to be naive -- dangerously naive.

I’m aware that the usual recipe for political effectiveness is just the opposite: to be cynical, calculating, an insider. But if you think, as I do, that we need deep change in this country, then cynicism is a sucker’s bet. Try as hard as you can, you’re never going to be as cynical as the corporations and the harem of politicians they pay for.  It’s like trying to outchant a Buddhist monastery.

Here’s my case in point, one of a thousand stories people working for social change could tell: All last fall, most of the environmental movement, including 350.org, the group I helped found, waged a fight against the planned Keystone XL pipeline that would bring some of the dirtiest energy on the planet from Canada through the U.S. to the Gulf Coast. We waged our struggle against building it out in the open, presenting scientific argument, holding demonstrations and attending hearings.  We sent 1,253 people to jail in the largest civil disobedience action in a generation.  Meanwhile, more than half a million Americans offered public comments against the pipeline, the most on any energy project in the nation’s history.

And what do you know? We won a small victory in November, when President Obama agreed that, before he could give the project a thumbs-up or -down, it needed another year of careful review.  (The previous version of that review, as overseen by the State Department, had been little short of a crony capitalist farce.)  Given that James Hansen, the government’s premier climate scientist, had said that tapping Canada’s tar sands for that pipeline would, in the end, essentially mean “game over for the climate,” that seemed an eminently reasonable course to follow, even if it was also eminently political.

A few weeks later, however, Congress decided it wanted to take up the question. In the process, the issue went from out in the open to behind closed doors in money-filled rooms.  Within days, and after only a couple of hours of hearings that barely mentioned the key scientific questions or the dangers involved, the House of Representatives voted 234-194 to force a quicker review of the pipeline.  Later, the House attached its demand to the must-pass payroll tax cut.

That was an obvious pre-election year attempt to put the president on the spot. Environmentalists are at least hopeful that the White House will now reject the permit.  After all, its communications director said that the rider, by hurrying the decision, “virtually guarantees that the pipeline will not be approved.”

As important as the vote total in the House, however, was another number: Within minutes of the vote, Oil Change International had calculated that the 234 congressional representatives who voted aye had received $42 million in campaign contributions from the fossil-fuel industry; the 193 nays, $8 million.

I know that cynics -- call them realists, if you prefer -- will be completely unsurprised by that. Which is precisely the problem.

We’ve reached the point where we’re unfazed by things that should shake us to the core. So, just for a moment, be naive and consider what really happened in that vote: The people’s representatives who happen to have taken the bulk of the money from those energy companies promptly voted on behalf of their interests.

They weren’t weighing science or the national interest; they weren’t balancing present benefits against future costs.  Instead of doing the work of legislators, that is, they were acting like employees. Forget the idea that they’re public servants; the truth is that, in every way that matters, they work for Exxon and its kin. They should, by rights, wear logos on their lapels like NASCAR drivers.

If you find this too harsh, think about how obligated you feel when someone gives you something. Did you get a Christmas present last month from someone you hadn’t remembered to buy one for? Are you going to send them an extra-special one next year?

And that’s for a pair of socks. Speaker of the House John Boehner, who insisted that the Keystone approval decision be speeded up, has gotten $1,111,080 from the fossil-fuel industry during his tenure. His Senate counterpart Mitch McConnell, who shepherded the bill through his chamber, has raked in $1,277,208 in the course of his tenure in Washington.

If someone had helped your career to the tune of a million dollars, wouldn’t you feel in their debt? I would. I get somewhat less than that from my employer, Middlebury College, and yet I bleed Panther blue.  Don’t ask me to compare my school with, say, Dartmouth unless you want a biased answer, because that’s what you’ll get.  Which is fine -- I am an employee.

But you’d be a fool to let me referee the homecoming football game. In fact, in any other walk of life we wouldn’t think twice before concluding that paying off the referees is wrong. If the Patriots make the Super Bowl, everyone in America would be outraged to see owner Robert Kraft trot out to midfield before the game and hand a $1,000 bill to each of the linesmen and field judges.

If he did it secretly, the newspaper reporter who uncovered the scandal would win a Pulitzer. But a political reporter who bothered to point out Boehner’s and McConnell’s payoffs would be upbraided by her editor for simple-minded journalism.  That’s how the game is played and we’ve all bought into it, even if only to sputter in hopeless outrage.

Far from showing any shame, the big players boast about it: the U.S. Chamber of Commerce, front outfit for a consortium of corporations, has bragged on its website about outspending everyone in Washington, which is easy to do when Chevron, Goldman Sachs and News Corp are writing you seven-figure checks. This really matters.  The Chamber of Commerce spent more money on the 2010 elections than the Republican and Democratic National Committees combined, and 94 percent of those dollars went to climate-change deniers.  That helps explain why the House voted last year to say that global warming isn’t real.

It also explains why “our” representatives vote, year in and year out, for billions of dollars worth of subsidies for fossil-fuel companies. If there was ever an industry that didn’t need subsidies, it would be this one: they make more money each year than any enterprise in the history of money. Not only that, but we’ve known how to burn coal for 300 years and oil for 200.

Those subsidies are simply payoffs. Companies give small gifts to legislators, and in return get large ones back, and we’re the ones who are actually paying.

Whose Money?  Whose Washington?

I don’t want to be hopelessly naive. I want to be hopefully naive. It would be relatively easy to change this: You could provide public financing for campaigns instead of letting corporations pay. It’s the equivalent of having the National Football League hire referees instead of asking the teams to provide them.

Public financing of campaigns would cost a little money, but endlessly less than paying for the presents these guys give their masters. And it would let you watch what was happening in Washington without feeling as disgusted.  Even legislators, once they got the hang of it, might enjoy neither raising money nor having to pretend it doesn’t affect them.

To make this happen, however, we may have to change the Constitution, as we’ve done 27 times before. This time, we’d need to specify that corporations aren’t people, that money isn’t speech, and that it doesn’t abridge the First Amendment to tell people they can’t spend whatever they want getting elected. Winning a change like that would require hard political organizing, since big banks and big oil companies and big drug-makers will surely rally to protect their privilege.

Still, there’s a chance.  The Occupy movement opened the door to this sort of change by reminding us all that the system is rigged, that its outcomes are unfair, that there’s reason to think people from across the political spectrum are tired of what we’ve got and that getting angry and acting on that anger in the political arena is what being a citizen is all about.

It’s fertile ground for action.  After all, Congress’s approval rating is now at 9 percent, which is another way of saying that everyone who’s not a lobbyist hates them and what they’re doing. The big boys are, of course, counting on us simmering down; they’re counting on us being cynical, on figuring there’s no hope or benefit in fighting city hall. But if we’re naive enough to demand a country more like the one we were promised in high school civics class, then we have a shot.

A good time to take an initial stand comes later this month, when rallies outside every federal courthouse will mark the second anniversary of the Citizens United decision. That’s the one where the Supreme Court ruled that corporations had the right to spend whatever they wanted on campaigns.

To me, that decision was, in essence, corporate America saying, “We’re not going to bother pretending anymore. This country belongs to us.”

We need to say, loud and clear: “Sorry. Time to give it back.”