Do we need another Kennedy?

In hard times, the noblesse oblige of an underqualified candidate is a tough sell 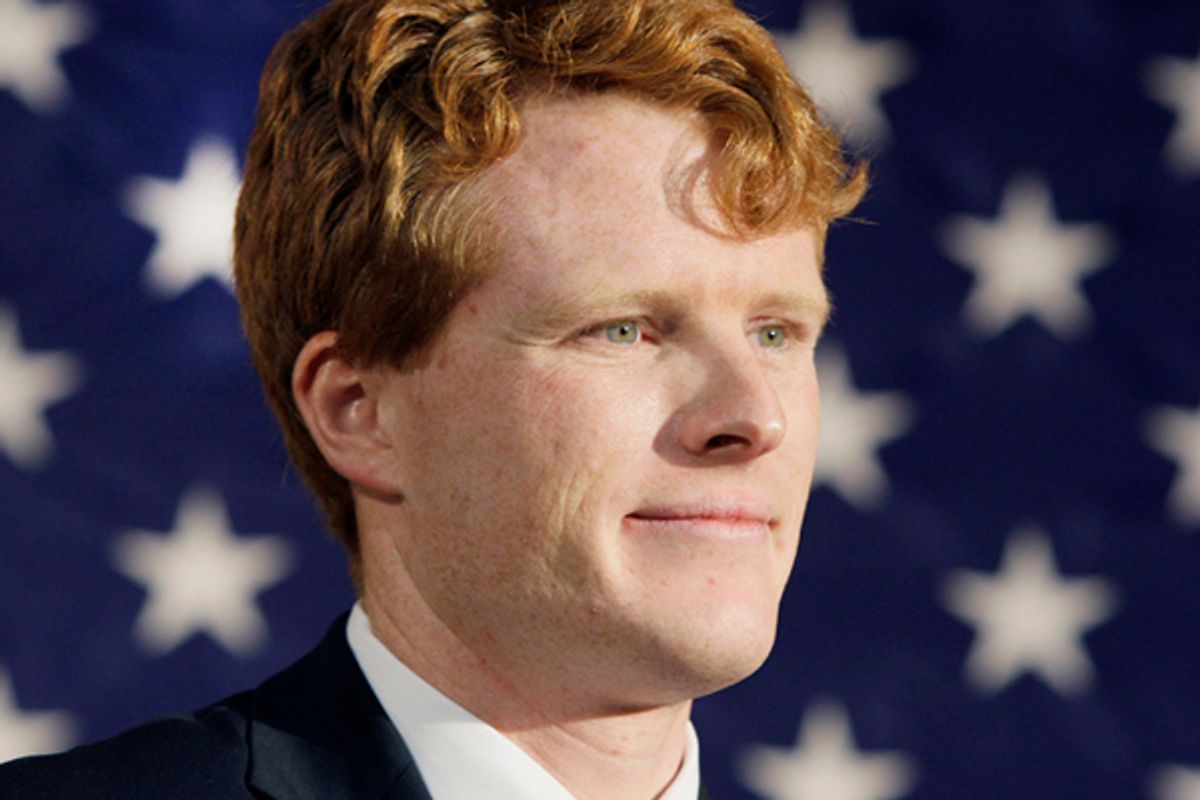 BOSTON -- Where does noblesse oblige end and craven nepotism begin? It’s a question that’s sure to be heard in Massachusetts as Joseph Kennedy III vies for the 4th District seat vacated by Rep. Barney Frank. The 31-year-old assistant district attorney, a son of former Rep. Joseph P. Kennedy II and a grandson of the late Robert F. Kennedy, has zero political experience apart from helping Uncle Teddy on his final campaign before he went off to the great Kennedy compound in the sky. Still, Joe III announced yesterday that he was “considering” a run, selling himself as a selfless public servant for entering the family business.

Why should we buy it? Where does the fair-haired kid get off thinking he is the best person who's to hold the seat held consecutively by such towering political figures as the President John F. Kennedy and House Speaker Tip O’Neill.

Because he can’t dodge his roots, the assistant district attorney (which is pretty much an entry-level job right out of law school) is sticking to the selfless-service narrative, like some great patrician politician from the era of his maternal great grandfather, Honey Fitzgerald, the mayor of Boston.

"My decision to look seriously at elected office is grounded in a deep commitment to public service and my experience -- both my own and that of my family -- in finding just, practical, and bipartisan solutions to difficult challenges," he said yesterday in announcing his exploration committee, which allows him to begin raising money. All righty, then.

It’s a calculated campaign gamble, as “Kennedy fatigue” is now a chronic condition in Massachusetts. Even Boston’s south shore, long known as the Irish-Catholic Riviera, is souring on the clan. So basking in the faded glow of Camelot may not be the best way to get yourself elected here. Even if his resume is covered in ivy (Stanford undergrad, Harvard Law), and he spent two years in the Peace Corps (the Dominican Republic is not exactly a hardship post), there are no guarantees in American politics, even for a Kennedy running for the old Kennedy seat in the bluest of blue states. Noblesse oblige is one thing. If it’s claimed on the pedigree coattails of fading dynasty, it won’t wash.

Joe III may find himself in an uphill struggle against more experienced candidates, including Boston City Councilor Michael Ross. So family consigiliere Paul Kirk was trotted out to sing the praises of the freckled redhead, even while anticipating questions about the possible arrogance of Kennedy power. “He’s a very mature but at the same time self-effacing man, well grounded, and he’s in it for the right reasons,” Kirk said repeatedly to Massachusetts media outlets.

Kirk made the point that the assistant DA could be doing things with his life other than stooping to hold office with congresssional pond scum. Of course he could. He’s a Kennedy. But why bother? No American will ever forget that his grandfather and grand-uncle gave their lives for this country. But, equally, who can deny that the bloodstream has thinned through the downstream generations? From Caroline’s flubbed attempt to fill Hillary Clinton’s seat to Uncle Patrick’s visits to rehab clinics to Daddy Joe II’s clumsy efforts at marriage annulment, the clan has coughed up one selfless career after the next.

Now comes this young man in a hurry at what was assumed to be the tail end of the family’s political life span, with last year marking the first time in 63 years that a Kennedy has not held office in Washington. He is the next generation, the first of the so-called fourth generation to run, selflessly, for public office. Kennedy dynasty 4.0.

It’s a ritual we saw played out 25 years ago when 3.0 came to power. I clearly remember how diminished the brand name felt when Joe Kennedy II took his seat in the 8thCongressional District of Massachusetts. It was a gorgeous Washington day and I found myself side by side with the congressman, waiting for a "Don’t Walk" light to change at a Capitol Hill intersection. “Hey, Joe,” I ventured. “I’m one of your back-home constituents.”

“Oh yeah,” he said, coming back at me with that square-jawed, all-American Kennedy aplomb, a touch of friendly overtone to his voice. “And what were you doing up there?”

“Not  much,” I said. “Just hacking it out as a cabbie after college in Boston.”

“That’s funny,” I returned, “I’ve always wanted to be a Kennedy.”

My badda-bing punch line explains the ambivalence we Massachusetts voters feel about the patronizing arrogance of power that comes with the Kennedy brain. What irks all but the mushiest of Massachusetts liberals is the sense of entitlement that gets wrapped in do-gooder claptrap. That line was wearing thin decades ago when the patrician era of American politics coasted to a close. In this economy, amid the Democratic backlash against the monstrously rich, it’ll be harder than ever to make that claim fly. Americans have lost faith in the rich, because even the best of them let us down. Even the Kennedy name, a name synonymous with wealth, may feel the whip end of populist resentment.

Just ask Democratic senatorial candidate Martha Coakley.  Pre-ordained as Sen. Ted Kennedy’s rightful successor, Coakley took the electorate for granted, campaigning hardly at all, and for her hubris was bested by Scott Brown, a professional pretty boy who ran as a Tea Party clone in an Everyman’s cherry red pickup truck. The late-great lion of the Senate wasn’t just rolling in his grave, he was clawing through the casket.