Sympathy for the 1 percent

After the Occupy autumn, \"House of Lies\" takes on corporate greed -- but from an evil consultant\'s perspective 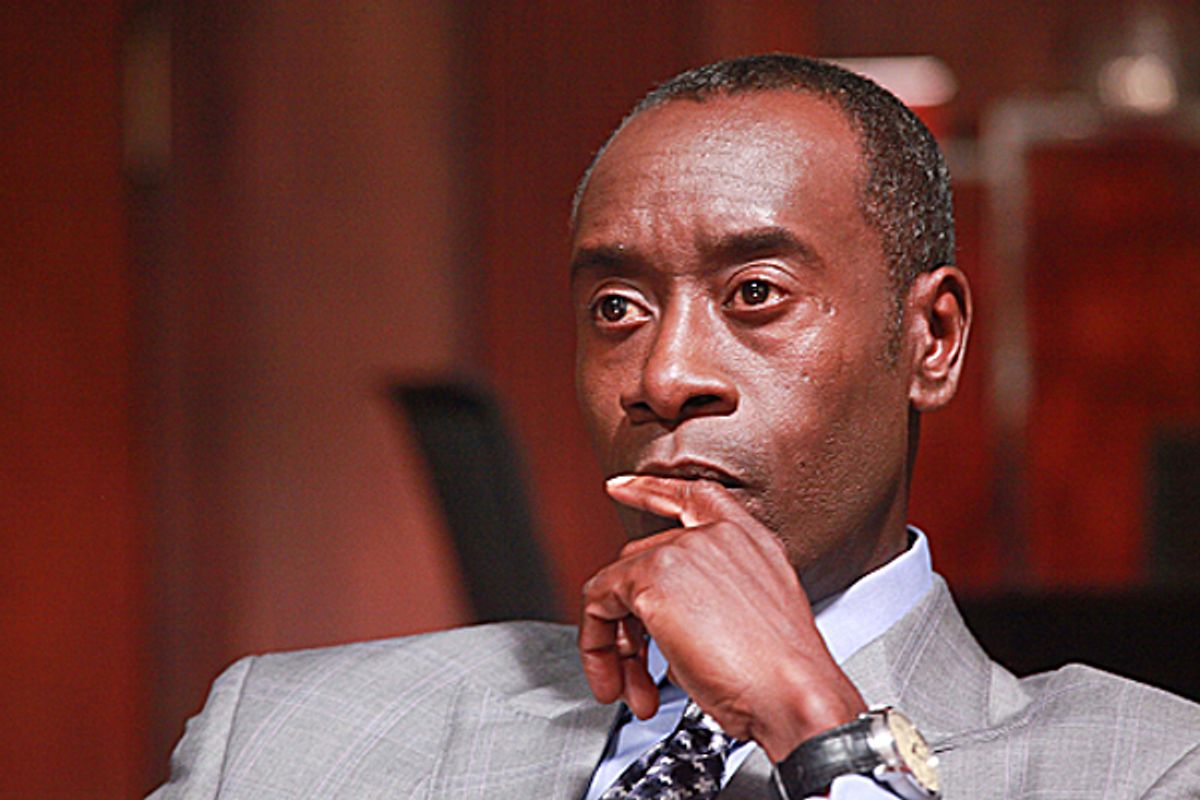 Don Cheadle as Marty Kaan in House of Lies (Showtime)
--

Showtime has been able to bask for a few weeks in the achievement of having the superior Sunday night lineup on premium cable (and thus all TV) for the first time.

In the fall, the best new show of the season, “Homeland,” was paired with the sturdy but wavering “Dexter” (how long can he go on killing?). Now, as Showtime launches its 2012 comedies with a free-access weekend, it’s hoping to build on the buzz.

The much-promoted new entry “House of Lies,” like “Homeland,” starts with a contemporary premise few others in TV seem to be touching -- in this case, corporate greed. And like the other shows returning with new seasons, “Californication” and “Shameless,” it challenges its audiences by featuring leads who are not just rebellious, but flirt with full-blown anti-social behavior disorders as they drive toward their single-minded pursuits with abhorrent character traits leavened only by their unerring love for their children.

What's supposed to be the charm of tomcatting Hank Moody in “Californication” or the super irresponsible Frank Gallagher in “Shameless” is reflected in Don Cheadle’s lead in “House of Lies.” He plays Marty Kaan, a supercharged management consultant bent on turning around companies by retooling their images.

It’s great to have Cheadle on series TV and the pilot is fully charged with his energy of the cad who sleeps with his ex-wife and, it turns out, chief competitor, before traveling to New York to retool the image of a mortgage company which is out of touch enough to hand out elaborate bonuses, and then be surprised by the resulting lousy PR.

Kaan knows what to do, in the manner of the dude from the movie “Thank You for Smoking,” and uses his wiles not to solve crimes, as so many other series heroes would be pressed to do, but to solve business problems of the 1 percent.

The question is whether viewers following the Occupy Autumn have the stomach for cheering on a firm trying to help the worst aspects of corporate America.

The makers of “House of Lies” try to have it both ways in the premiere, by both screwing the company and helping it beat its bad image. But unlike “Dexter,” it’s not a trap you’ll want to see them try to escape each week.

There’s a lot happening in the opening episode, when Cheadle’s character jarringly stops the action to explain the terms of the business, or even more disturbingly, constantly hits on his co-worker (He should also stop to explain all the things they do, like this, that are plainly illegal).

Because the co-worker is played by Kristen Bell, you get the feeling she’ll have her day against him. But so far, she seems underused, as is Ben Schwartz , whose cult character Jean-Ralphio was a breakout star of “Parks & Recreation,” but feels restrained here.

“House of Lies” comes from writer Matthew Carnahan, who previously plied his cynicism in the series “Dirt,” the Courtney Cox series about tabloids that ran on FX. Like that show, there is an underlying tension over sleaze and success. But “House” is more solidly built, thanks mostly to the bracing quality of Cheadle, who scarcely has time in the mayhem to reconsider what he does.

Like “Dirt,” “House of Lies” trumpets its intent with its title. Still, its long-term health may lie in whether in a time of anxiety and bankruptcy from Wall Street ambushes, it chooses its clients and their concerns carefully.