The biggest threat to Citizens United 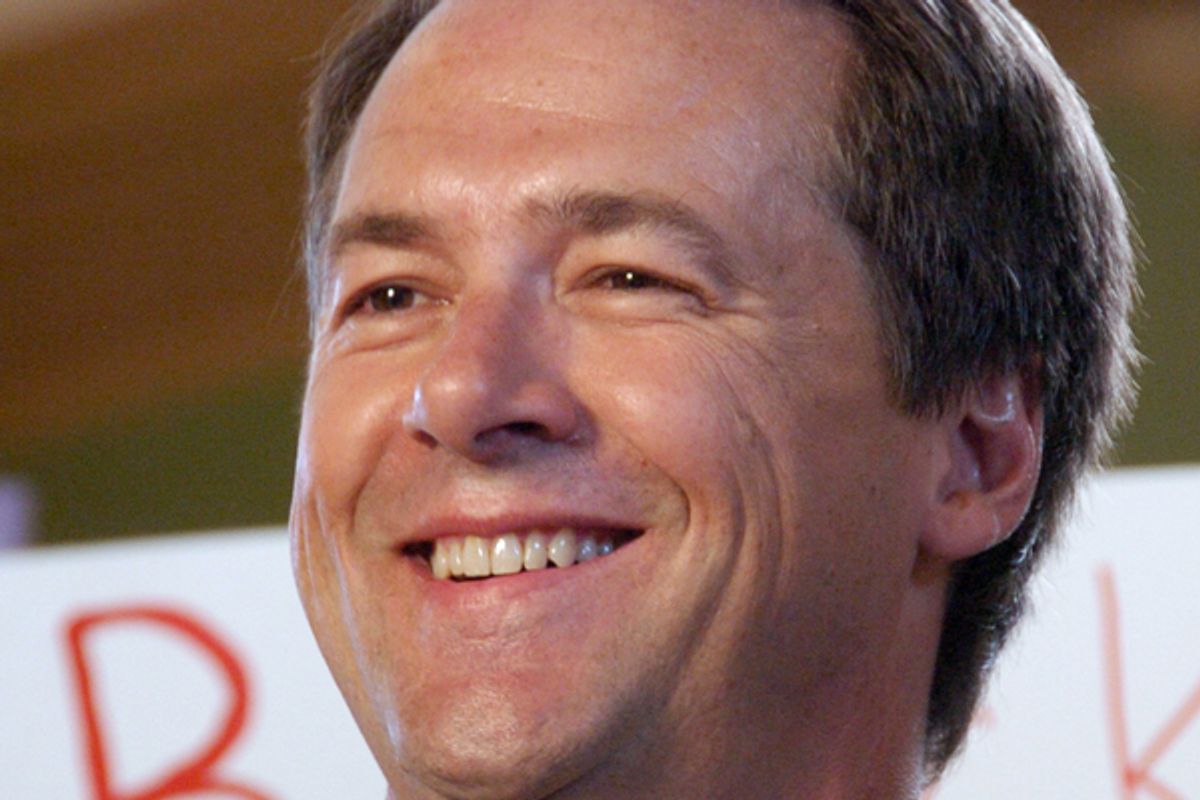 Last week, while the national press corps was busy pretending the tiny Iowa caucus was the only news in America, a major ruling out of Montana paved the way for a likely U.S. Supreme Court showdown over the role of corporate money in politics.

In the case, which was spearheaded by the state's Democratic Attorney General Steve Bullock, Montana's top court restored Big Sky country's century-old law banning corporations from directly spending on political candidates or committees. Legal experts believe that upon appeal, this case will come before the nation's highest court. While there, it could serve as the first test of the precedents in the infamous Citizens United decision that essentially allows unfettered corporate spending in campaigns.

This week on my weekday morning radio show on KKZN-AM760, I spoke with Bullock about the case. What follows is an edited transcript of our discussion (you can find the full audio podcast here).

Walk us through what this case was all about and why it’s important not just for Montana but for politics all across the country.

It’s interesting because while this case is rooted in Montana, I think that it does have implications for politics throughout the country.

Montana (through) my office was the lead in writing the brief that half the states joined when the Supreme Court was considering Citizens United. (The brief) said that state elections, and corporations, and unlimited corporate spending don’t necessarily go together.

Montana has had on its books since 1912, which was passed by citizens initiative, a law called The Corrupt Practices Act. And what The Corrupt Practices Act did is essentially said that corporations cannot make expenditures or contributions in the political system. And we got there because our history was rooted in corporate domination of elections. It was in 1906 that a paper in Montana said, “the greatest living question of the day is whether corporations shall control the people or the people shall control the corporations.” And at the time the Copper Kings as they were called, those mine (owners) that mined copper in Montana literally owned our legislature, our judges, our local county planning boards. It was all throughout and it was at one point called “the Montana situation.”

So we have a real background in the unfortunate effects of unlimited corporate expenditures in elections and as a result when Citizens United came down dealing with federal law and federal elections it wasn’t something that I wanted to just give up on the last hundred years in Montana. We defended out laws, right before New Year's Eve the Montana Supreme Court said that our ban on corporate expenditures remains constitutional.

Well, I think and what we argued at the state level is, this isn’t Citizens United. There’s different burdens, different interests and different tailoring.

The Citizens United court went on and on about how difficult it is for corporations through political action committees (PACs) to actually participate in the political system. But in Montana, literally, it’s a two-page form that takes two minutes to fill out and there’s not all these texts that the Federal Election Commission has. There’s a different burden to participate. And it’s also different interests.

Unlike Citizens United, we presented a history, not only history in Montana of corporate control but concerns from some of the contemporary leaders of our state of what unlimited corporate dollars would end up causing.

If you could pick one state that was an example of what happens when there aren’t these laws on the books it would be Montana. I think back to the story of Sen. William Clark, the Copper King who literally bought a United States Senate seat for himself. Do you think it's an overstatement to say that if Montana loses and/or Citizens United isn't overturned, that American politics could start resembling Montana's at the beginning of the 20th century?

I don’t think it is an overstatement. Ironically, in February 2010 I was asked and testify to a U.S. Senate committee on the effect of Citizens United and this was a successor committee to literally the same committee that had refused to seat William Clark.

Clark’s testimony back then, what he said, is that many people have become so indifferent to voting in Montana by reason of large sums of money that have been expended in the state, that you have to a great deal of urging and it takes a lot of men to do it to go around among them and stir them up and get them out. So a hundred years ago William Clark said, because of all the corporate dollars, democracy is broken.

You are going to be standing, potentially, in front of the U.S. Supreme Court and somebody like Justice Scalia is going to say: "Mr. Bullock, don’t you agree that money is speech? After all, we have precedent on the books in Buckley v. Valeo stating that money is speech. So how can you defend what Montana is doing, and how can other states defend similar bans on corporate money?" What will you say?

I think what we can say is that even if money is equated to speech, that that doesn’t mean you can’t demonstrate compelling state interests that allow you to put some restrictions on speech. Just like you can’t yell “fire!” in a movie theater, there are state interests in making sure that that speech has some limitations. And that’s what our Montana Supreme Court stated is that we have compelling interests in the integrity of the election process. We have a compelling interest in encouraging full participation.

You’re running for governor, which, even in a smaller state like Montana, costs a lot of money. Did you ever think that if you pushed this case so hard, it might make it more difficult for you to raise the money you need? Do you think your role in this case will put at least part of your campaign fundraising in peril?

For me the calculus was relatively simple. The voters entrusted me with an incredible job as Attorney General and for a hundred years we’ve had a ban aptly named The Corrupt Practices Act that has served Montana well. And as a result, people participate, everybody has a seat at the table. So for me the calculus was: I owe it to a century of Montanans going forward to do all I can to defend this irrespective of what might happen in my next campaign.