The death of the celebrity memoir

We can thank Snooki for something: Finally, this annoying publishing trend looks like it is fizzling out 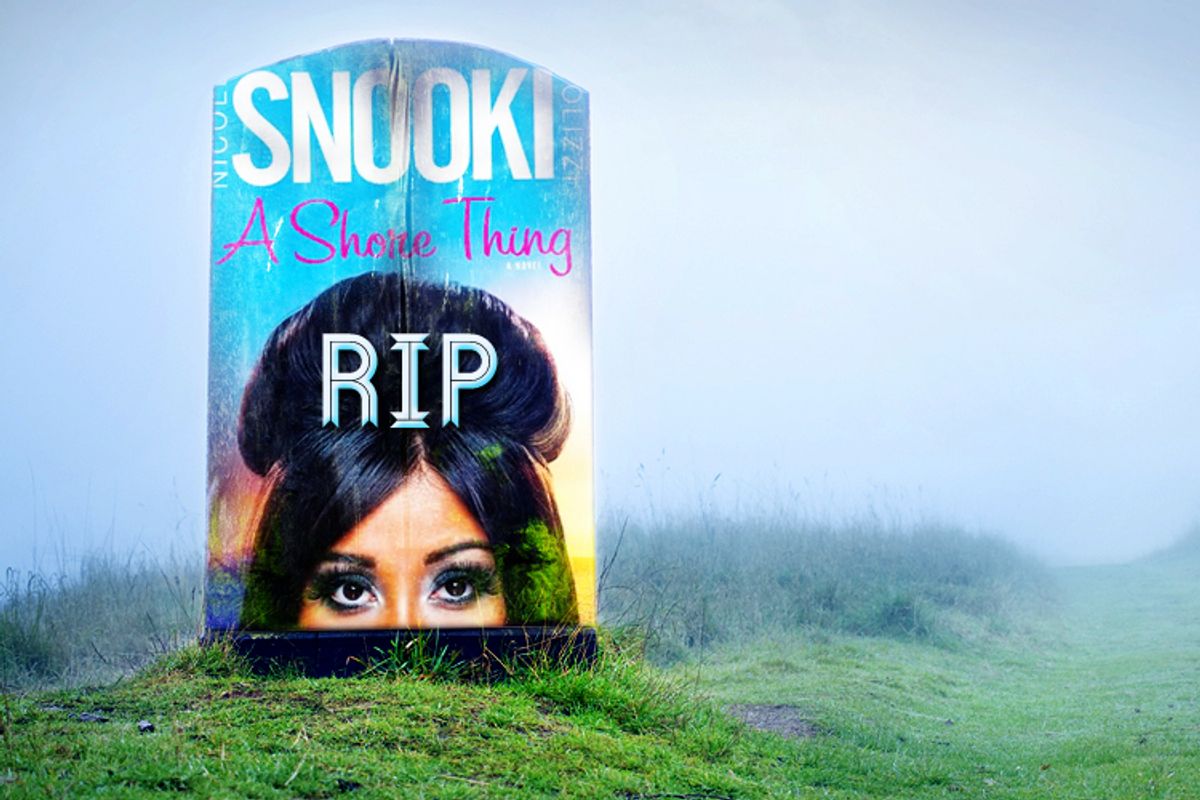 In a recent essay for the Daily Beast, Michael Korda, the storied former editor in chief of Simon & Schuster, warned the public to stay away from celebrity memoirs, decrying the majority of these books as "dull, homogenized, bland and sanitized." He ought to know, for as he goes on to explain, he spent much of his professional life trying to persuade movie stars to write their autobiographies. (One of the ironies here is that Korda, while a celebrity only in the book world -- which means not much of a celebrity at all -- is famous for writing divertingly about almost any topic, including himself. This piece is no exception.)

A growing awareness of this truth might explain why sales of celebrity memoirs have fallen off of late. According to the Guardian newspaper in Britain, a whole raft of celebrity-authored books tanked in the U.K. last year. In the U.S., as well, there have been several notable failures, particularly by cast members from the reality TV show "Jersey Shore." Could the public finally be wising up?

Of course, the cause might just be the low caliber of the celebrities in question. I didn't recognize any of the names the Guardian held up as fizzling memoirists -- except for Alan Partridge, who isn't even a real person. "I, Partridge" was in fact written by the actor-writer-director Steve Coogan, who created the character of Partridge for a television series parodying B-list chat-show hosts and other effluvia of the media world. His book is a parody of celebrity memoirs, and reportedly the only "significant" title in a genre whose sales have dropped 60 percent in the past year.

However, I suspect it's mostly just wishful thinking that has some observers pegging the celebrity memoir as a fading trend. It's hard for me to say for sure, though, because I seem to have a much lower than average interest in the people who write them. To be honest, apart from a couple of episodes of "Queer Eye for the Straight Guy," back when it first came out, I've never watched a reality TV show. (My feeling is that if I'm going to be entertained, I'll go to professionals.) So I still don't really know who Snooki is, and when I asked friends and acquaintances to fill me in around the time her book came out, they all said. "You're lucky. You're much better off not knowing."

Most celebrities are actors of some kind, and my (somewhat limited) experience writing movie and television journalism has led me to conclude that actors are some of the least interesting people in the arts. That doesn't mean I'm not regularly awestruck by the work they create; I just really don't want to listen to them talk about it. Or about their personal lives. And I certainly don't want to read about either one. The more famous and rich an actor is, the more controlled, frictionless and therefore insipid his or her life is likely to be. As Korda writes, "Years of standing in the limelight portraying other people for large amounts of money does not usually lead to a high degree of self-examination, let alone self-criticism."

I'm not talking about creative visionaries like Patti Smith or innovators like Tina Fey, real writers whose ability to reflect thoughtfully on their own work and lives is unquestioned. Their books don't exist for the sole reason that the people who wrote them are famous and know some other famous people; often, they aren't even thought of as celebrity memoirs in the first place. The true celebrity memoir is "written" (that is, ghostwritten for) what used to be called "entertainment personalities," namely, movie and television stars.

A movie star, like a politician, has usually spent much time, effort and money to construct a public persona, and, as Korda explains, such people are "seldom likely to want to deface their images, or to puncture the balloon of their egos merely to sell books." (The money to be made on even a successful book is dwarfed by the fees for starring in Hollywood movies.) For this reason, most famous actors' memoirs are bland and cautious, but even if they were willing to "tell the truth" -- the thing, according to Korda, that every book publisher hopes for -- that truth is unlikely to be worth the price of a hardcover book.

The example he uses is the film actor Glenn Ford, whose memoir the agent, Swifty Lazar (a more entertaining character than any actor Korda mentions), once tried to peddle. Ford had co-starred and been infatuated with Rita Hayworth (the Angelina Jolie of her time). But they'd never slept together, which put him in a fairly similar position to every other guy in America except Orson Welles. Who cares? And if Ford had slept with Hayworth? Is that really enough to justify the other 250 pages of a no-doubt tedious book chronicling Ford's childhood in Canada and early theater work in Santa Monica? Sort of a moot point, that, since Ford clammed up at the very mention of the Hayworth non-affair.

Perhaps reality-TV stars have arisen to fill the candidness deficit created by people who are famous for some good reason. That movie star or top athlete is never going to 'fess up about his or her private quarrels and most humiliating intimate or professional moments; they don't have to. But reality-TV stars exist for the sole purpose of having embarrassing experiences in the public eye. They aren't just willing to talk about this stuff: it's their job. They've got nothing else to talk about.

Again, I'm the opposite of an expert in this department, but I do have a certain perspective to offer. Because I don't watch reality TV, my impression of it is constructed entirely from conversations with people who do watch it. With the exception of a handful of contest shows like "Project Runway," I've never heard anyone speak of the characters in reality TV shows without contempt. Often they will go on and on about how awful these people are. Whatever lofty anthropological reasons some of them may offer for watching the shows, from my perspective it seems that their chief appeal lies in giving viewers someone to look down on.

But while Americans may take great pleasure in collectively groaning over whatever risible antics Snooki gets up to for a half-hour every week, it's no surprise that this would not translate into sales of her book. Surely people buy celebrity books not because they're anticipating a satisfying literary experience, but rather to own a tangible piece of that individual's stardom. (Also: Autograph tours are an obligatory element in the publication of any celebrity-authored title, so they get a chance to meet their idol face-to-face.) It's another way of expressing one's fandom. If the whole point of Snooki is hating on her, why would anyone want to purchase a bookful of that?

Celebrity memoirs make some commenters very, very angry. Although the genre has been around (in one version or another) for at least a century, the latest iteration is often held up as Exhibit A in arguments for the disgraceful state of book publishing. I can't get too worked up about this. It makes as much sense as ranting about the abundance and popularity of books on any topics that don't interest me personally (i.e., golf -- lotta golf books out there).

Besides, the indignation seems misdirected. Publishers publish these titles because (until recently, at least), they do sell. For all the hopeful talk of declining enthusiasm for the genre, it's worth noting that "Kardashian Konfidential" has sold well over 100,000 copies. Paris Hilton's "Confessions of an Heiress," published in 2004, has sold over 1 million worldwide.

Doesn't the problem here lie instead with the buyers of such books? (Seriously: Since I have such a hard time imagining why anyone would do so, if you have bought one of these celebrity memoirs, would you be so generous as to explain your motives in the comments thread?) Every time someone told me I was fortunate in not knowing who Snooki or Kim Kardashian are, I couldn't help wondering why they chose to know so much about her themselves. Perhaps they secretly enjoy their own theatrical disgust with the state of American culture and society.

If we really wanted these annoying figures to go away, the solution is pretty simple: Stop paying attention to them. I'm here to testify that this is very easy to do. You, too, can know next to nothing about the Situation or Tila Tequila (whoever they are!), if they really bother you that much. A blank expression will pass over your face when their names are mentioned in conversation, and when you see placards announcing their forthcoming appearances at chain bookstores, you'll frown vaguely, shrug and keep walking toward the shelves with the real books.

Michael Korda on the dullness of Hollywood memoirs

The Guardian on flagging sales of celebrity memoirs

The Hollywood Reporter on the failure of Nicole "Snooki" Polizzi’s "A Shore Thing."