The GOP's peculiar vocabulary of race 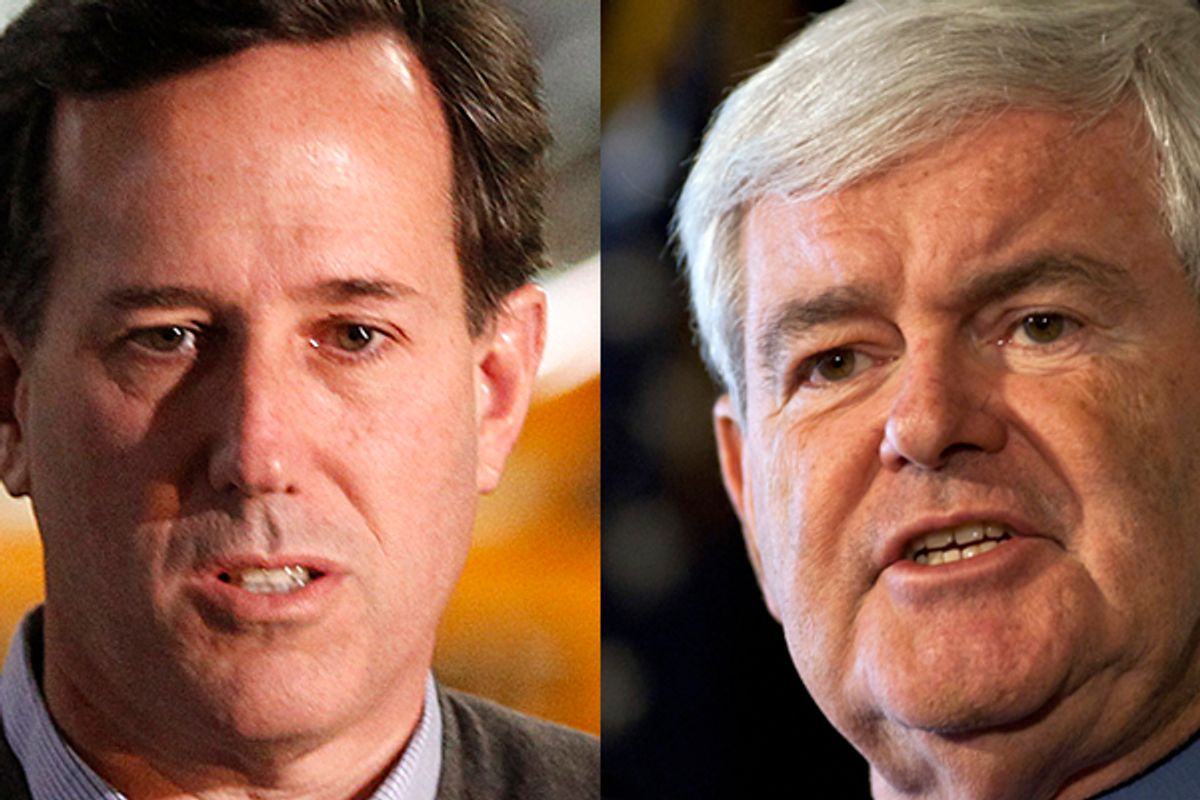 If Rick Santorum is upset that pretty much nobody believed him when he said he wasn't talking about "black people" living off "somebody else's money," he has Newt Gingrich to blame. A day after the GOP's flavor of the week changed stories and claimed, "I didn't say black," when he said,  "I don’t want to make [something sounding like black] people’s lives better by giving them somebody else’s money," Gingrich again called President Obama "the food stamp president." He told reporters in New Hampshire, "I will go to the NAACP convention and tell the African-American community why they should demand paychecks instead of food stamps."

On Thursday I performed the mental exercise of giving Santorum the benefit of the doubt, and laid out the way the GOP's '60s era rhetoric about "welfare queens" and "welfare cheats" has been updated to include much of the multiracial working class, including whites – including anyone who has a public sector job, a union-protected job, or collects unemployment, Social Security or Medicare. It seemed theoretically possible – while still hard to believe – that Santorum was merely sharing the new GOP line that we're all welfare queens now, any of us who've ever benefited from a government program.

Then Gingrich made my thought exercise seem unduly kind, by demonstrating exactly why people should be inclined to distrust Santorum's new story and believe he was talking about black people: The modern GOP seems unashamed of its prejudice.

It's impossible not to believe that having our first black president unleashed a new round of GOP race-baiting, even leaving birtherism aside. In August, one of Obama's few Republican friends, Sen. Tom Coburn, lapsed into shameful racial stereotyping trying to "defend" the president, telling an Oklahoma constituent that Obama's "intent is not to destroy … It’s to create dependency because it worked so well for him … As an African-American male, coming through the progress of everything he experienced, he got tremendous benefit through a lot of these programs." A black guy raised by a (white) single mother gets into Harvard Law School: In the everyday vocabulary of today's Republican Party, he's looking for a handout.

Ronald Reagan wrapped up the ugly racism of earlier Republicans in pretty paper when he claimed, "We fought a war on poverty, and poverty won," and made the case that welfare -- which he associated with Democrats -- created "dependency" that harmed its recipients. You didn't have to be angry or racist anymore to oppose welfare programs; you could say you were trying to help their recipients. Reagan also muted the rhetoric that associated welfare with race, at least a little. More than 30 years later, having a black president makes it seem safe, and necessary, to unwrap Reagan's pretty paper and once again make plain the GOP's political association between welfare and African-Americans.  Make that, having a black Democratic president. This wouldn't happen to President Herman Cain, would it?

I talked about Santorum's spin with Michael Eric Dyson and Ed Schultz on MSNBC's "The Ed Show" Thursday night: