The most important GOP poll of the entire campaign ... so far

South Carolina should be a death trap for moderate Massachusetts Mormons, but now it might make Mitt the nominee 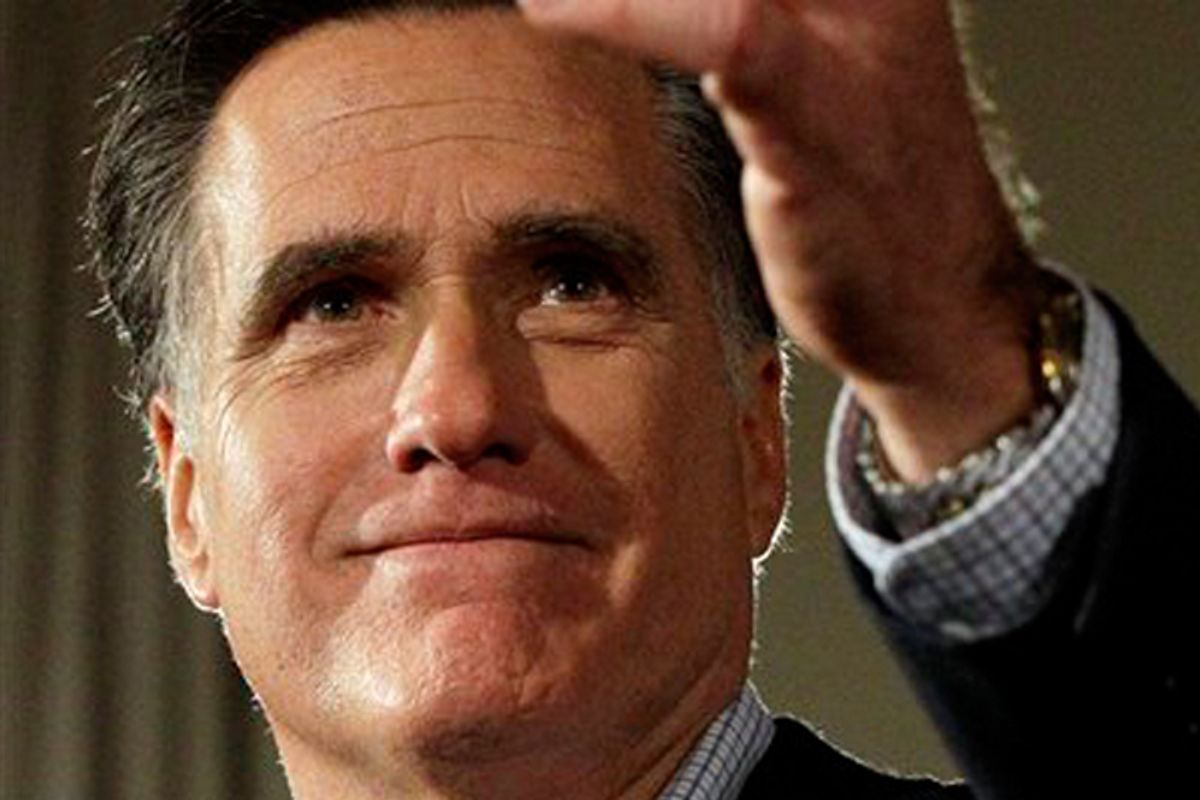 Rick Santorum is surging in South Carolina, nearly quintupling his support in the past few weeks, but that's not the big news in a new poll released Friday. Mitt Romney's surge is. The former Massachusetts governor stands at 37 percent in the CNN/ORC survey -- a jump of 17 points from last month and nearly double the total for Santorum, who is now at 19 percent.

This is probably the most significant result of any poll taken during this campaign.

After all, the major storyline of the GOP race has been Romney's ongoing inability to push past 25 percent in national and key early state polls (except in New Hampshire, his almost-home state). He faced this barrier all through 2011, even though a string of potentially formidable candidates all declined to enter the race and even as the candidates who did run melted down one by one. Nor did Romney's victory in Iowa this week offer any real evidence of a breakthrough. Splintered opposition allowed him to eke out a first place showing, but with just 24.6 percent of the vote -- lower than his 2008 tally (when he finished a distant second to Mike Huckabee) and the worst-ever mark for an Iowa caucus victor.

Since Romney has nothing to gain from New Hampshire, where he's the runaway favorite, the Iowa result set up South Carolina's January 21 primary as the definitive early test for Romney. On paper, he's a terrible cultural and ideological fit for the state -- a New England Mormon with an extensive moderate/liberal paper trail. About 60 percent of the South Carolina GOP electorate will be composed of evangelical Christians, and the state could arguably be considered ground zero for the Tea Party Republicanism-- home to Sen. Jim DeMint and site of some of the movement's signature primary season triumphs in 2010. If there really is a low ceiling on Romney's support within the Republican Party, South Carolina (where he mustered just 15 percent in his '08 campaign) will surely expose it.

On the flip side, though, if Romney were to post a win -- especially a lopsided one -- in South Carolina, it would probably seal the nomination for him on the spot. Which is why today's poll is so meaningful.

There seem to be two factors at work in Romney's suddenly enviable South Carolina position. One is that Republican voters who resisted joining his bandwagon for all of 2011 are now doing so, enough to push his numbers to heights that were previously off-limits. Here it's worth remembering the one silver lining that existed for Romney in all of the polls that came before this: Republican voters, by and large, have been saying that they like him personally. His favorable scores have been as strong as anyone's (and much better than those of Ron Paul, who faces a ceiling of his own within the party). The question was what it would take for that likability to translate into votes, and while there's not been enough polling in the state to pinpoint when Romney's South Carolina surge began, it may be that his Iowa performance did the trick.

Romney is also benefiting from split opposition. Newt Gingrich is right behind Santorum in the new poll, with 18 percent. Add their numbers together and you get the same 37 percent that Romney now has. Rick Perry, who randomly decided to stay in the race after his dismal Iowa showing, is chewing up another 5 percent. To have any chance of knocking off Romney, Santorum needs to unite the party's base behind his campaign. His Iowa near-miss gave him an opportunity to play that role, but he needed help -- but Perry and Gingrich aren't giving it to him. Nor are most of the right's most influential voices, like Rush Limbaugh. Santorum needs them to call on conservatives to coalesce around him, but so far they're sitting on their hands.

This is the perfect recipe for Romney. Barring a surprise, he'll post a solid New Hampshire victory next Tuesday, then move into South Carolina with Santorum and Gingrich (and even Perry) still jockeying to play the consensus anti-Romney role. If he can then score a clear win (one in which he breaks well past the supposed 25 percent barrier) in the Palmetto State, he'll be unstoppable.