The voice of Monday night 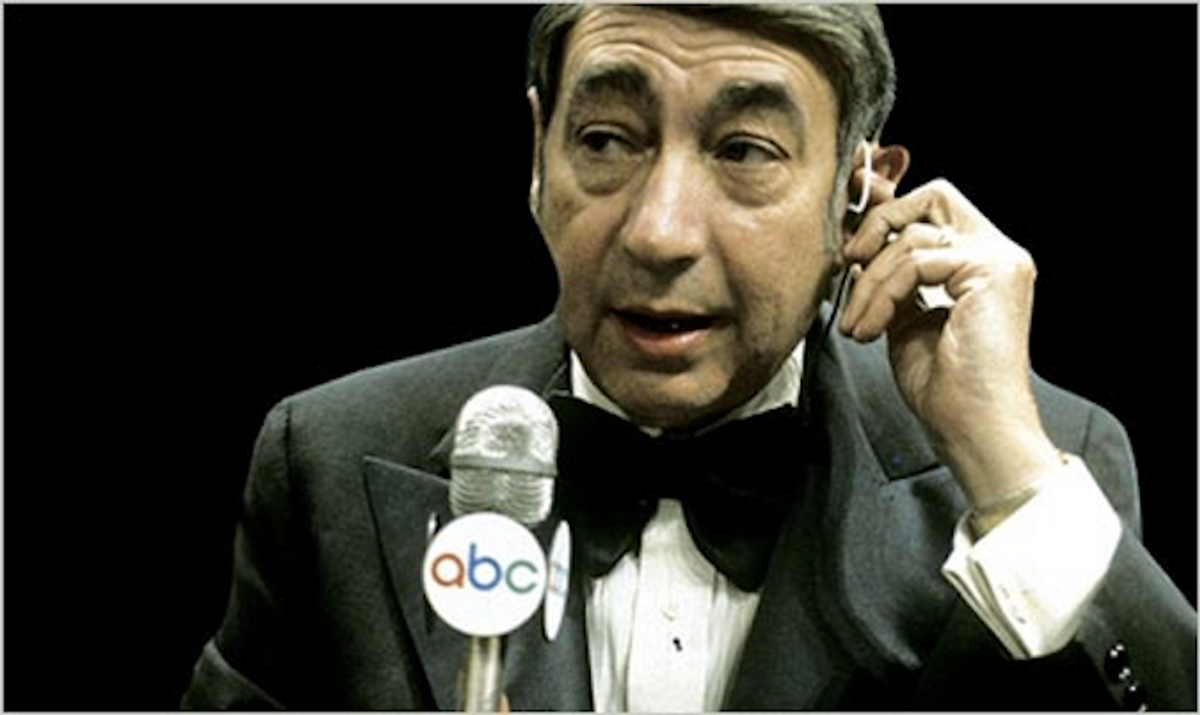 For Americans of a certain generation, just the name Howard Cosell instantly summons into memory's ear the brash, nasal yammer of the voice, one that blared from American TVs and radios for three decades, demanding to be recognized, whether it was spinning verbiage around some of sports' heaviest moments -- such as when Palestinian terrorists kidnapped and eventually murdered 11 Israeli Olympians in 1972 -- or its lightest ("Battle of the Network Stars," anyone?).

Cosell was the King of Sports, for a time at least, because he asked questions that other people wouldn't and wasn't worried about ruffling feathers. What did concern him, though, was what everybody thought of this tough-talking lawyer out of Brooklyn, N.Y.

Mark Ribowsky's new biography, "Howard Cosell: The Man, the Myth, and the Transformation of American Sports," chronicles how the man's massive ego and equally outsize insecurity worked in tandem to push him into nearly every American's living room, first as the host of a radio show, "Speaking of Sports," and then breaking into television as a sports anchor for WABC in New York -- and really makes you glad you never worked with the guy. Cosell never forgot -- or forgave -- anyone who said or wrote something unpleasant about him. And pretty much everybody in the sporting and broadcast worlds fell into that category at some time or another before the sportscaster's death in 1995 of a heart embolism.

"Arrogant, pompous, obnoxious, vain, cruel, verbose, a showoff. I have been called all of these," Cosell once said. "Of course, I am." Such moments of self-awareness are refreshing, since Cosell generally felt free when off the air to let loose on security guards, underlings, and bosses alike with the tired "Do you know who I am?" tirade. And you can be sure American TV viewers of the late 1960s and '70s knew who his public persona was. That was partially due to the relationship Cosell struck up with Muhammad Ali when the boxer was still called by his birth name, Cassius Clay. The pair had a special chemistry, and each used the other to enhance his own fame. When Ali was stripped of his heavyweight title in 1967 after refusing, on religious grounds, to be drafted into the U.S. Army for the Vietnam War, Cosell, who had been a major in the Army during World War II, emerged as one of the few public voices backing him. The building up of Ali, a true culture changer, may be Cosell's greatest legacy (along with his part in creating "Monday Night Football" as a program and an institution).

Ribowsky's book is not a glorification of Cosell. In fact, it is often unrelenting in showing just how egotistical, bombastic, highly unpleasant and extremely insecure he could be. Although the personality on display here is definitely unpalatable, Ribowsky is not only concerned with likability. He constructs a good case for thinking that the tough journalism of Cosell's earlier years shifted the future of sports coverage (and it certainly appears that Cosell was a lonely pioneer). But the culture also completely changed around Cosell, especially with the introduction of 24/7 broadcast news. The sports journalists who now seek out the tough stories may owe Cosell something, but mostly just a tip of the hat.

And it's not as if Cosell finished out his own run without practicing lazy or soft journalism. He ultimately gained too many friends in the higher echelons of the sporting world -- and enmeshed himself in too many petty squabbles -- to allow anyone to accept him as an unbiased reporter. What we're left with is primarily the memory of that voice. Loud though it still rings, the diminution is little short of tragic.