Mitt takes the endorsement game \"to a whole new level\" 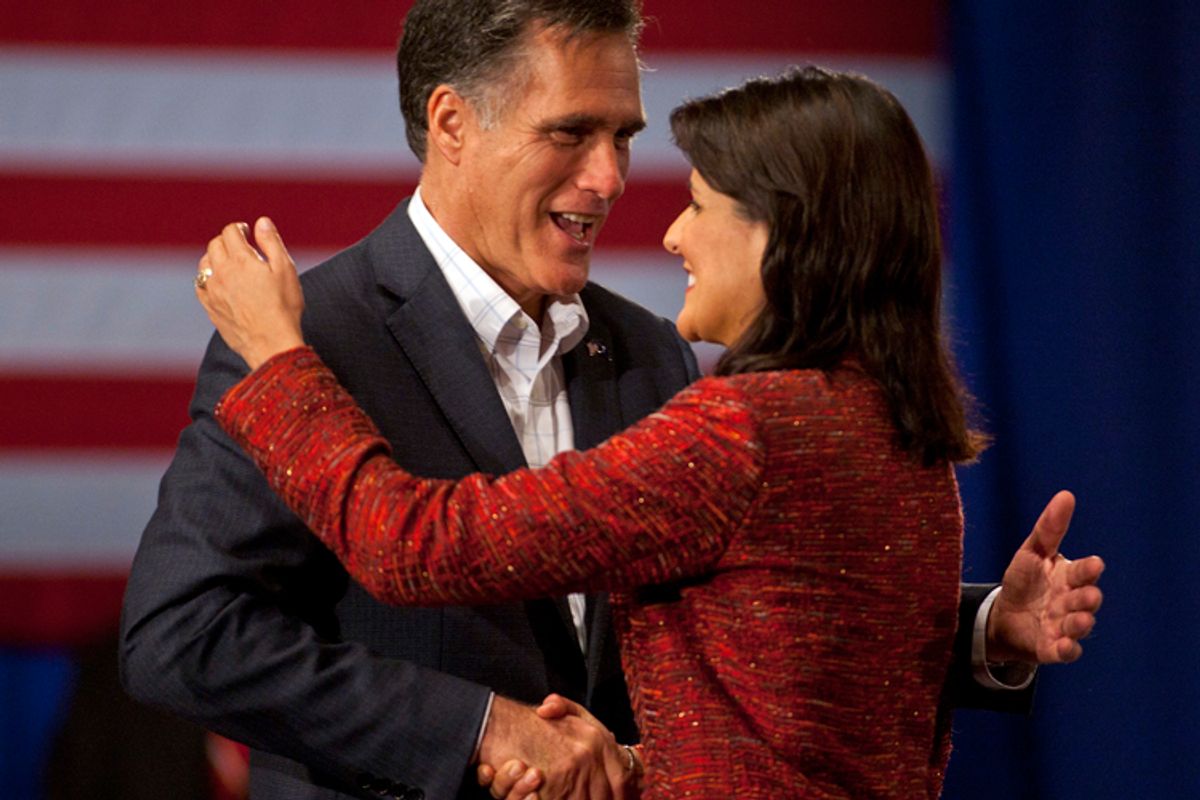 Money may not be buying Mitt Romney much Republican love, but it’s going a long way toward helping him buy the next best thing: endorsements in the GOP primaries.

Romney’s Free and Strong America PAC and its affiliates states have lavished close to $1.3 million in campaign donations to federal, state and local GOP politicians, almost all since 2010. His recipients include officials in the major upcoming primary states of New Hampshire and South Carolina, and in three southern Super Tuesday states where he was trounced four years ago.

In New Hampshire, a U.S. senator, a congressman, 10 state senators and three executive councilors shared $26,000 in donations from Romney’s Free and Strong America PAC in 2010 and 2011 combined. All 15 have showered Romney with endorsements leading up to Tuesday’s primary

South Carolina Gov. Nikki Haley came out for Romney last month – a year after his Free and Strong America PACs funneled $36,000 to the Tea Party darling’s 2010 election bid. And 19 state and Washington, D.C., lawmakers in three Super Tuesday states – Georgia, Tennessee and Virginia -- are backing Romney after his PAC poured a total of $125,500 into their coffers for elections held in 2009 and 2010.

“This is as old as politics itself,” Edwin Bender, executive director of the National Institute of Money in State Politics. “He’s just taking it to a whole new level.”

Julian Zelizer, a Princeton University political scientist, said Romney’s gambit is a smart strategy for a deep-pocketed candidate. “He’s investing wisely and trying not just to run up the numbers where he’s strong, but trying to build it up where he’s weakest,” Zelizer said.

Nowhere has Romney spent as heavily – and harvested the rewards – as in Tuesday’s must-win state of New Hampshire. Romney’s Free and Strong America PAC and its Granite State affiliate invested some $53,000 to help local officials win races, and another  $13,000 for congressional and Senate candidates.

New Hampshire state Sen. Sharon Carson said in a press release that she took the time to examine the “backgrounds and qualifications of each of the candidates” running for president before she backed Romney on Dec. 27. She received $1,000 from Romney’s federal Free and Strong America PAC for her winning 2010 reelection bid.

Dante Scala, a University of New Hampshire political scientist, said Romney needs 35 to 40 percent of the vote to be viewed as the winner.  Romney’s strategy of snatching up local endorsements has resonated with Granite State residents, and that’s reflected in the widening gap in the polls.

“They want to suck all the oxygen out of the primary,” Scala said. “And so far they’ve succeeded.”

After his crushing 2008 campaign defeat, Romney created the Free and Strong America leadership PAC to contribute to local, state and federal officials’ campaigns.

According to the Federal Election Commission and OpenSecrets.org, the PAC donated $890,299 to some 167 congressional and Senate candidates in 2010, while distributing another $404,226 in 2010 to state and local candidates, according to state campaign finance records collected by FollowTheMoney.org.

If Romney’s been chided for being too moderate, he’s shown little moderation when it comes to the mother’s milk of politics: money.

“Clearly, the one thing Mitt Romney has to his advantage is money, and the best way to use it in the early stages is to spread it around to build up a political organization,” said Michael Dennehy an unaligned New Hampshire GOP operative. “Now, it appears he’s reaping the benefits.”

Romney is already earning dividends in states where he suffered embarrassing setbacks in 2008. In South Carolina, for example, Romney placed a distant third behind Mike Huckabee and John McCain.

Romney trumpeted the backing of Haley in December. The pair are touring South Carolina Friday and New Hampshire this weekend. His Free and Strong America PAC raised a lofty $36,000 for her in 2010.

Romney also is bolstering his support in three March 6 Super Tuesday states where his showing was dismal in 2008.

In Georgia, where Romney finished a distant third behind Huckabee and McCain, Free and Strong spent $36,000 in 2010 on 24 state candidates. So far, 11 have endorsed Romney ahead of the primary. Another nine congressmen received $25,052 in 2010 from the PAC, and four are backing Romney.

In Tennessee, another Super Tuesday state where Romney also finished third, Romney netted the backing of U.S. Reps. Diane Black and Jimmy Duncan. They were among GOP state and federal Tennessee candidates who split $17,500 from Romney’s Free and Strong America PAC in 2010.

In 2008, Romney placed fourth behind McCain, Huckabee and Ron Paul in Virginia. But this year he snagged the backing of Lt. Gov. Bill Bolling and Rep. Barbara Comstock, who were among the recipients of some $27,500 donated by the Free and Strong America PAC.

So far, the spending has paid off not just in endorsements but in the development of a campaign infrastructure, experts said. This will help Romney against less well-funded rivals when the primaries are in several states simultaneously and particularly on Super Tuesday, when surrogates are vital in many places at once.

But there’s a risk, Zelizer warned, that over-spending could get Romney painted as an out-of-touch elitist trying to buy his delegates.

“He doesn’t want this to backfire and look like he has so much money, he’s buying an election, he’s buying a nomination,” Zelizer said.

There’s also controversy. For while the practice of contributing to campaigns in exchange for endorsements isn’t new, the New Hampshire and Alabama Democratic Parties have filed complaints with the Federal Election Commission. They charge that the Free and Strong PACS coordinate with the state affiliates to circumvent federal and state campaign laws. The PACs have denied any wrongdoing.

Dennehy, the GOP operative, said that rather than complain, others should wonder why they’re not exerting their political muscle as effectively as Romney.

“He’s the only one who donated a sizable amount of money to dozens of elected officials,” Dennehy added. “Let’s face it. When no one else gives you money, you don’t think long and hard who’ll you’ll give your endorsement to.”