Is the state still in denial on the anniversary of the Tucson shootings that killed six? 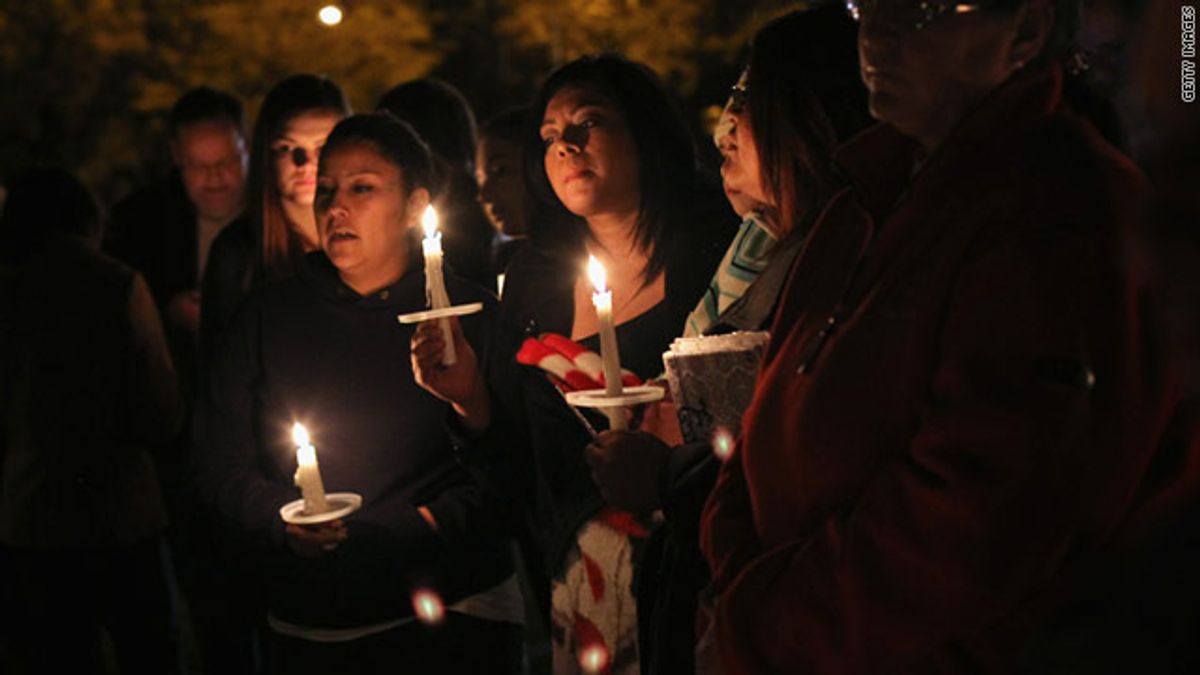 One year ago in Tucson
--

When folklorist James "Big Jim" Griffith launched Tucson Meet Yourself, a folk traditions festival in 1974, he sought to gather the loose ends of the burgeoning southwestern city in a celebration of its diversity and mutual interests.  The downtown festival flourishes a generation later; but large parts of the greater city of Tucson, defined by many for its fraying edges of suburban desert sprawl and strip malls, have also unraveled into transient, segregated and anonymous enclaves where few people will know or ever meet each other.

In 2009, a study commissioned by the Center for the Future of Arizona found that only 12 percent of surveyed residents in the state agreed that "people in our communities care about each other."That all changed, at least for a while, on January 8th, 2011, when 22-year-old Jared Lee Loughner stepped out of a taxi in front of a Safeway supermarket on the northwest suburban edge of the city and unloaded an estimated 32-rounds of bullets from an extended magazine clip once banned under the Violent Crime and Control Law Enforcement Act.  The story of his derangement is well known now.  His target was 41-year-old US Rep. Gabby Giffords, who he managed to shoot in the head; Loughner killed six people and injured 18 other citizens before he was wrestled to the ground and disarmed.

Along with the lost lives of an unusually diverse group of citizens, including federal Judge John Roll, congressional aide Gabe Zimmerman, nine-year-old Christina-Taylor Green, and retirees Dorothy "Dot" Morris, Phyllis Schneck and Dorwan Stoddard, Loughner also managed to shatter one of the last remnants of trust in the public commons for my hometown.The extraordinary heroism on January 8th, including the life-saving role by Giffords intern Daniel Hernandez, bolstered the city--and the nation--with a sense of resiliency and bravery in a moment of sheer disbelief.

Memorials grew at the supermarket and at the University of Arizona hospital; testimonies flowed.  Neighbors met and chatted.  Committees for civility emerged.  President Obama soon arrived in Tucson and poignantly addressed a packed arena under the banner, "together we thrive."One year later, Rep. Giffords will miraculously join Tucsonans on this Sunday for a special candlelight memorial to the victims, as we once again grapple with the still unfinished process of healing and finding some meaning in the fallout of a tragedy.

When we wake up on Monday morning, the real challenge will be whether Tucson, Arizona--and the nation--will still to rise to meet ourselves as neighbors and effectively work to prevent the next tragedy from finding its all-too-easy expression through the barrel of the gun, or recoil back into the divided enclaves of denial and distrust that nurtured the very landscape of this tragedy.

2011 has not exactly been a year to "thrive together" in Arizona.  Nor were the Safeway victims the only casualties of derangement and hatred in our state's borderlands of denial.

Only a month after Loughner's assault, an Arizona jury gave anti-immigrant militia wanna-beShawna Forde the death penalty for her role in the murder of nine-year-old Brisenia Flores and her father in a botched vigilante-inspired robbery south of Tucson.  In July, a Maricopa County Superior Court justice sentenced Phoenix resident Gary Thomas Kelley to 20 years in prison for the murder of 3rd-generation Arizona Juan Varela, after an allegedly drunken Kelley objected to protests against Arizona's controversial SB 1070 immigration law and threatened Varela to "go back to Mexico" or die.

In September, Attorney General Tom Horne stunned observers at a conference on the state's ban on the teaching of Mexican American Studies, as he invoked one of the bloodiest episodes in ancient Roman history and demanded that Tucson's nationally acclaimed Ethnic Studies program "be destroyed."  Arizona state superintendent John Huppenthal followed up Horne's harrowing pronouncement by referring to Mexican American children in Tucson as "Hitler youth."

A week after Giffords made a dramatic return to the floor of Congress in the debt ceiling vote this summer, one of the most chilling reminders of Tucson's denial of its open wound took place at a Tucson Unified School Board meeting in August.  A self-proclaimed Tea Party member, who had actively circulated a conspiracy video on Facebook that Giffords' attempted murder was set up by the Department of Homeland Security, unleashed an inflammatory tirade of a coming civil war and bloodshed over Ethnic Studies in Tucson.

None of these incidents, outside of the Forde murders, garnered any national media attention or even much local discussion, as if a crisis is never a crisis until it is validated by disaster.  A prescient admonition by one of Loughner's fellow students at Pima Community College, who noted his "seriously disruptive" and "scary" behavior in class, remains a cautionary reminder that "until he does something bad, you can't do anything about him."

No one has probed the terrain around the Tucson shooting better than author and journalist Tom Zoellner. A 5th-generation Arizonan, a confidant of Giffords and a virtual neighbor of the troubled Loughner, Zoellner reluctantly returned to his hometown soon after the Safeway tragedy.  In his new book, "A Safeway in Arizona: What the Gabrielle Giffords Shooting Tells Us About the Grand Canyon State and Life in America," Zoellner set out to transcend the endless political banter over blame and explores the social contexts underscoring how Giffords' act of democratic participation--"reaching out to strangers at the fringe of a Safeway"--could lead to one of the most disturbing assassination attempts in recent history.  In the process, Zoellner asks a lot of questions most Arizonans would prefer to ignore; for starters, given Loughner's abundant trail of erratic and violent flare ups, including his suspension from Pima Community College for unruly behavior, would a simple gun law requiring a one-hour safety training prior to purchase have prevented his access to a semi-automatic weapon?

Zoellner notes that while the Tea Party-led legislature managed to pass a law declaring the Colt Single Action Army Revolver the state gun in the first session after the Giffords shooting, it also cut $510 million from the state health care budget, including mental health services.

To place all of the blame on one person, mental health care expert Dan Ranieri tells Zoellner, is "so limiting, so naive and almost condescending." Such a sweeping dismissal, Ranieri concludes, "absolves people of their responsibilities."But asking who is responsible for such a horrendous crime by a young man medically diagnosed with schizophrenia is a risky endeavor in the politically charged debates over gun laws and lobbies, mental health care and ethnic tension, and the still small possibility of public trust and "communities that care about each other" in 2012.

As I wrote on the day of the tragic killings last year, I cut my political teeth as a 17-year-old intern with legendary Arizona Congressman Rep. Morris Udall, who defied liberal Democrats with his opposition to gun control. Udall told a Harvard crowd during his presidential campaign in 1976: "I don't claim total courage; I don't claim total wisdom."

As Arizonans, I wonder if we truly won't meet ourselves until we find both the courage and wisdom to end our denial of a still festering crisis.