Whether from a Central Park penthouse or our fire escape, the love of a great view is embedded deep within us all 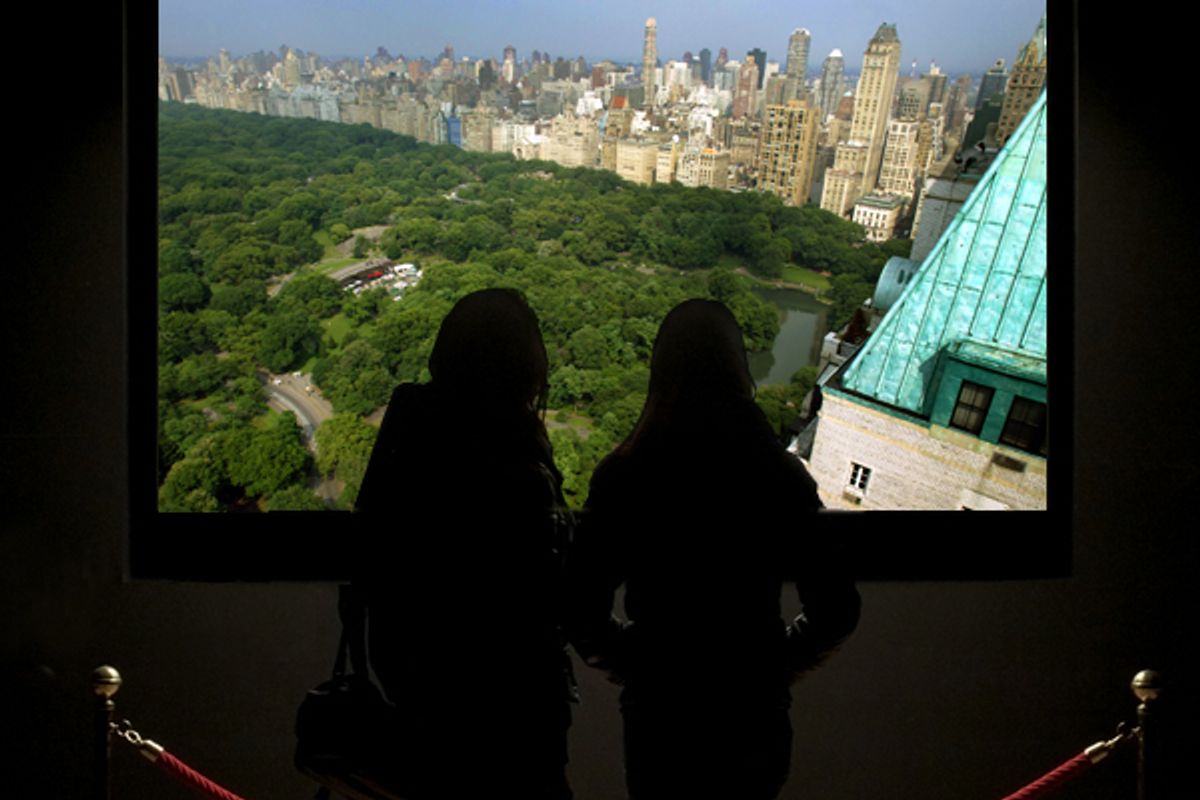 A few weeks ago, when the most expensive home in the history of Manhattan real estate sold for $88 million, a good chunk of that almost nine-figure check paid for something the occupant doesn't even own. The record-breaking transaction involved the penthouse at 15 Central Park West, where a park view can add over $2,000 per square foot to an apartment's price. That means the penthouse's view alone cost the buyer tens of millions of dollars. No doubt the new occupant, the 22-year-old daughter of a Russian oligarch, loves trees. But does she love them that much?

Views can drive urban real estate prices to absurd heights. Some apartments are touted as almost secondary to what's seen through the window, mere vehicles for a killer view. But our willingness to shell out for a vista is embedded deep within our psyches, a combination of desires born of primitive instincts, status anxiety and the distinctive psychology of city dwellers.

Most city views are, by definition, unnatural -- we didn't evolve to seek out concrete and brick. "When we were evolving as a species, green space and water were essential for survival," says Frank McAndrew, a psychology professor at Knox College in Illinois. "We were programmed to like views of these things more than others." This helps explain why, even today, views of parks and waterways command the highest sums. The fact that we no longer need them is trumped by our primal response to what they once offered as resources. "We'll still take a fountain and a city park over no green space or water at all."

For our early ancestors, a good view also meant safety. "Researchers call it 'prospect and refuge,'" says McAndrew, "places you can see without being seen or eat without being eaten." Living high up, or at least somewhere with a good vantage point, offered both benefits. Think of "prospect" as the view ahead of you, where you can spot enemies and game, and "refuge" as the structures that keep you from becoming game yourself. "We like to see long distances because it gives us the sense that we can see what we need to, while at the same time we feel protected," McAndrew says. "We can watch the world without it looking back at us."

Because of the survival advantage, as human societies developed, the most powerful seized the best views. Over time, that desire went from a purely pragmatic one to symbolic, as well. "Think of it this way," says McAndrew. "The higher the penthouse or office is, the more inaccessible it is. The more powerful people are the ones who can manage to get there. If you enter a building and there's someone right by the door, you know they're not very important. If you have to fight your way up several floors, past secretaries, to get to someone, that person must have more power." Companies pay millions for sky-high real estate with sweeping views for the same reason middle managers strive for the corner office with the two-directional view -- having it says you were strong enough to get it.

The maturation of human culture produced something else, as well: a desire for awe. While early Homo sapiens may have cowered from thunderstorms, with time our threshold for awe moved higher. But one thing that still reliably dazzles us is an incredible view. When I call Winifred Gallagher, author of "New: Understanding Our Need for Novelty and Change," the Wyoming-based behavioral science writer is on the 52nd floor of a Manhattan high-rise, taking a break from her book tour. "I can see the East River, the Verrazano Bridge, all the way to the Hudson Canyon," she says, a little hypnotically.

Gallagher says she's never lived in a tower before, and explains that what she's experiencing is "what psychologists call the diminutive effect. It's what Gothic cathedrals and Hitler's Nazi architecture strove for. It makes you feel your tininess, but it can also make you feel like you're part of something really vast." Call it an ironic twist that a big-shot salary is required for an apartment that makes you feel small. But that feeling of tininess can be thrilling -- it's what draws us to redwood forests and the edges of cliffs, and in the case of cities, where redwoods and cliffs can be hard to come by, it entices us into high-rises.

Then again, "There are people who love townhouses, who love seeing trees and birds and people. That's a view, too -- and sort of a fabulous view," says realtor Lynda Wiggins, vice president at Brown Harris Stevens. Wiggins says that while Gallagher's view may be the priciest -- realtors call it an airplane view -- not everyone wants to feel like they're living in a Boeing 747. Street views, where the bustle of the city is backdrop to even your indoor existence, appeal to a different part of our brains, says Sally Augustin, the founder of Design With Science, a company that applies environmental psychology to architecture and design.

"We're social beings and we're always interested in what other humans are doing," says Augustin. "When we have a view of other people, that intrigues us. We get really involved in those views. On a largely subconscious level, we're trying to figure out what's going on in them, like when you're in an open office and you hear another conversation, you can't help but try to figure out what's being said." Such constant engagement can be stimulating or exhausting, depending on the viewer, which is why an individual's taste in views can change over time. "We like places where we can process the information we're exposed to. If you compare a young person whose eyes and ears work well, they can be comfortable with a view that a person who's 90 years old might be overwhelmed by."

In other words, a complex, ever-changing street view that one person finds disorienting might feel exhilarating to another, assuming it has what researchers call "legibility," says McAndrew. "As long as there's an order to them, we like to look down boulevards and see buildings in a line." (Longing for legibility also goes back to our primal instincts -- to navigate and escape.) Views that are high in legibility can be kaleidoscopically busy yet still feel engrossing rather than assaulting -- if the activity makes sense to our eyes and brains. Even the apparent chaos of, say, a Mumbai train station or a Cairo bazaar can be pleasing to the eye of someone who's familiar enough with how the whole thing fits together.

The ideal view, as it turns out, isn't a question of nature versus city. The 52nd floor isn't better than the first, nor are rolling hills more pleasing than a downtown's daily hustle. "There's a certain satisfaction that comes from seeing all these things in combination," says McAndrew, "something legible that has vegetation and water and prospect and refuge." Depending on the eye of the beholder, that combination can come in many forms.

Dan Geist might be the perfect example of this. At 44, Geist still lives in the same Upper West Side apartment he was raised in. Through his bedroom window is a courtyard surrounded by buildings: "It's straight out of Hitchcock's 'Rear Window.' I've been waking up to it since I was 1." In the living room, he looks onto a brick wall, "a rather interesting wall off of which tar and other material has slowly been flaking over the decades." He says if he was one floor higher, instead of the wall, he would have a view of New Jersey's verdant palisades. A floor above that, and he'd see the Hudson River.

But he doesn't. Instead, his view is of memories, and that's why the brick wall is "interesting," why the "Rear Window" sight lines are "cozy," and explains how the occasional "distant wail of a siren feels quite lovely." These aren't views anyone would pay $88 million for, but for Geist their value isn't monetary. They stir up emotions that connect him to his home and his city in a very particular way. "One of my earliest memories is of waking up on a drizzly morning and looking out the window and writing a little poem about it," he says, "the gray sky, how it made me feel cozy and warm, and walking into the living room to give my mother the poem."

That's a view that many of us would love to have, despite its lack of panorama. Looking out, on scenes both humble and grand, apparently involves looking inward, too.