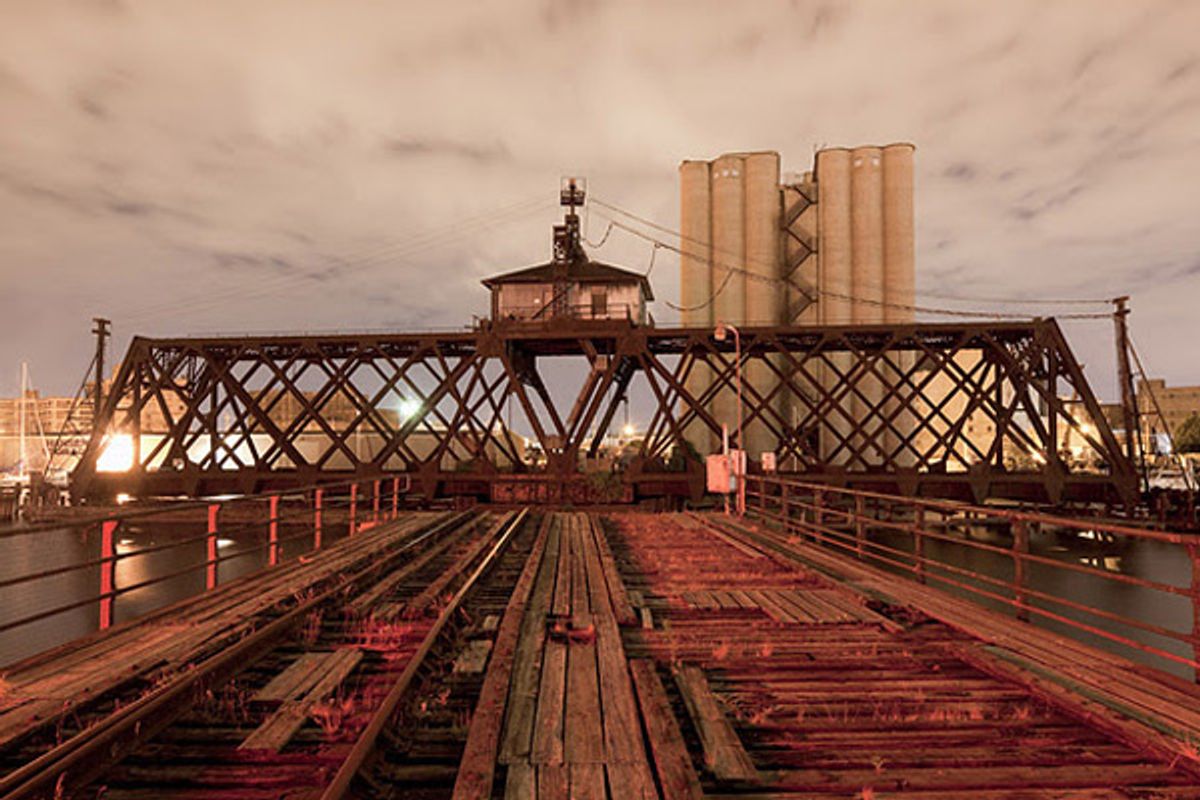 Post-industrial visionaries nationwide have been "occupying" old factories and other buildings -- not in protest, but in an attempt to make those buildings productive again -- long before last fall's first encampment in Zuccotti Park. A new exhibition in Milwaukee -- part of a larger project to spotlight urban revitalization across the country -- draws attention to the buildings, projects and people behind this stealthy (but steady) movement for positive urban change.

Over the phone, organizers Michael Carriere and David Schalliol explained why they think Milwaukee in particular is at the "cutting edge" of the 21st-century renewal; check out the following slide show for some of Schalliol's evocative images of life and work in the Wisconsin city's evolving urban landscape.

First of all, can you explain the basic premise of your project? How did the two of you start working together?

MC: It started around two and a half years ago. I'm an urban historian by training, but I had really gotten attached to the topic of how the financial crisis was impacting the built environment of American cities. I teach in Milwaukee, so the story is all around my office.

From a historical perspective, I was interested in trying to start at the moment of urban renewal in cities like Milwaukee, and then push it forward to try to create a narrative for the latter half of the 20th century -- to historicize the idea of urban crisis. But just looking at what cities like Milwaukee were doing, I found it really inspiring. I found myself drawn to people who were interacting with the urban environment in ways that I didn't expect -- turning what one person would see as an abandoned building into, say, a working urban farm. It complicated the narrative [of urban abandonment] in ways that I found incredibly exciting, and even exhilarating. I wanted to document what I found in ways beyond the written word -- and that's when I reached out to David, whose photography I had admired for quite some time.

DS: I'm a Ph.D. student in sociology, and I also teach in Chicago. Michael and I are interested in similar issues, but I go about [my work] in a different way. Some of the straight sociological work that I've been doing has really focused on the built environment, how individuals pursue the built environment, and what kinds of actions are being taken, given a particular understanding of that environment. One component of that work is photographic: For the last several years, I've been spending a lot of time, particularly on the South Side and West Side of Chicago, looking at what's been happening in the neighborhoods that have been most affected by industrialization, racial change and so on.

In the course of this work, I was bumping into some of the same kinds of things that Michael was finding and engaging. For example, I was finding these places where people had discovered abandoned buildings, figured out how to get hold of them, and then tried to use them for something really unusual or different. I was already engaged and beginning to do a little bit of documentation of that work when Michael got in touch with me, and we started talking about how to take these [local] ideas and think about them in a national framework.

At the Grohmann Museum in Milwaukee, we're pulling this national idea back into a specific locality -- examining all of the social factors that are at work, as well as the actions of people on the ground, and seeing how it's all coming together in one particular place.

Which other cities will you be featuring in your work? Where else might you try to mount an exhibition?

DS: We've been involved in research in about 30 cities, at this point -- from Albuquerque, N.M., to Providence, R.I. [In terms of mounting similar shows outside Milwaukee,] we've reached out to people in New Orleans, and we've also been talking to people in Chicago -- both institutions and individuals. But one of the things that's really exciting to us is the idea of actually working with the organizations [we've studied in each particular city]; that's something that may take a little bit longer than doing a typical installation.

Michael told me in an email that he thinks Milwaukee is at the "cutting edge of a potential redefinition of [work and labor] in the 21st century." Why do you think that is? Other cities -- like Detroit -- tend to get a lot of media play; is Milwaukee under-recognized in this sense, do you think?

MC: I think it is. That's not to say that what's happening in Detroit isn't exciting, or shouldn't be covered. But I think Milwaukee is particularly interesting when it comes to one of the topics often addressed in stories about Detroit and other cities: urban agriculture. Here in Milwaukee, we've had Growing Power since 1993; on the heels of the recession of the early '90s, you have a man called Will Allen taking over a derelict property, and turning it into a viable urban farm that's now been in existence for close to 20 years. You also have people like James Godsil at Sweet Water Organics, who have brought what Will Allen was doing to the next level in terms of technology (Sweet Water uses "aquaponics," a system wherein plants and fish are raised symbiotically).

I think Sweet Water's example is particularly useful for two reasons. It represents not only the reclamation of a building itself -- they're in an old Harneschfeger factory building on the south side of the city, and they definitely see the [cultural] value of keeping the building around -- but also the idea of bringing productive work back to that building.

In the neighborhood around Sweet Water, there are a lot of old factory buildings -- a lot of old tanneries being converted into lofts and living spaces. That's OK, but what we really like about Sweet Water, and what they're very adamant about, is that they want to make these spaces productive again. They see themselves as part of a narrative of production in the city of Milwaukee. They see themselves as being in touch with the [industrial past], but working in a way that speaks to the needs of the 21st century. For me, Sweet Water is a really nice symbol of why Milwaukee matters. It doesn't cover over our history of industrialization, but it's able to take what is positive from that era -- a beautiful, functional building -- and turn it into something new.

DS: I think one of the other things that's really important about Milwaukee -- and you can see it again in the Sweet Water example -- is that the city itself has reached out and become engaged in thinking about how it can support many of these initiatives. This is something that we're seeing other cities come around to, but I think Milwaukee is really in a position where it's been more flexible -- it's been more outwardly supportive (financially and otherwise) to these institutions than other cities have been.

Do you think the revitalization of industrial space -- the creation of workspaces, and therefore also work -- is especially relevant in America today?

DS: I think there are a variety of ways in which these projects are important to people who aren't directly involved in them. The first part has to do with the way that work has been transformed in the last 30 or 40 years, as more and more jobs have moved out to the suburbs, adding ring-like areas around cities. That's really changed the way work patterns have played out in central cities. One of the main problems on the south and west sides of Chicago, and of course in many central cities in the U.S., is that the jobs that brought so many people to the cities just aren't there anymore. And by taking these former industrial sites and transforming them into something else, these same focal points for productive work activity can help fill roles that have been increasingly absent.

MC: Right. To me it comes back to this idea of "reclamation," which I think speaks directly to the current climate. Indeed, I can see the roots of the Occupy movement in some of the things we've been seeing around the country for the past two and a half years. The idea of reclaiming ideas of work, or spaces of work ... In Miami, you have groups like Take Back the Land reclaiming housing -- and they were doing this years before the Occupy movement started to consider occupying public space or foreclosed homes. We see art projects in cities across the country that are using foreclosed homes as their canvases, so to speak. For me, this is a potentially transformative moment. And what we hear people talk about who are doing this is the idea of returning urban space back to the people that it was meant to serve. For someone who studies the history of urban renewal, that's incredibly exciting. So I've come to see a lot of this as a kind of corrective for many of the ways that policy impacted cities throughout the 20th century.

One thing we constantly heard from people [revitalizing urban spaces] around the country was, "I wish I knew of other people doing this," or "I feel like I'm really alone in this." So one of the things that excites me about this project is the idea of allowing these people first to know about each other, and then also to find some way of working with each other. [There are so many] Occupy people who know that something is wrong, but don't know what to do with their energy; [we'd like to show them that] there are things already happening that would be a perfect fit for them.

"Working Legacies: The Death and (After) Life of Post-Industrial Milwaukee" is on display at the Milwaukee School of Engineering's Grohmann Museum, in Milwaukee, Wis., through Feb. 6. Versions of the show may then travel on to other cities.