How football saved my relationship with Dad

After the second divorce, he grew angrier and harder to reach. But one subject provided common ground 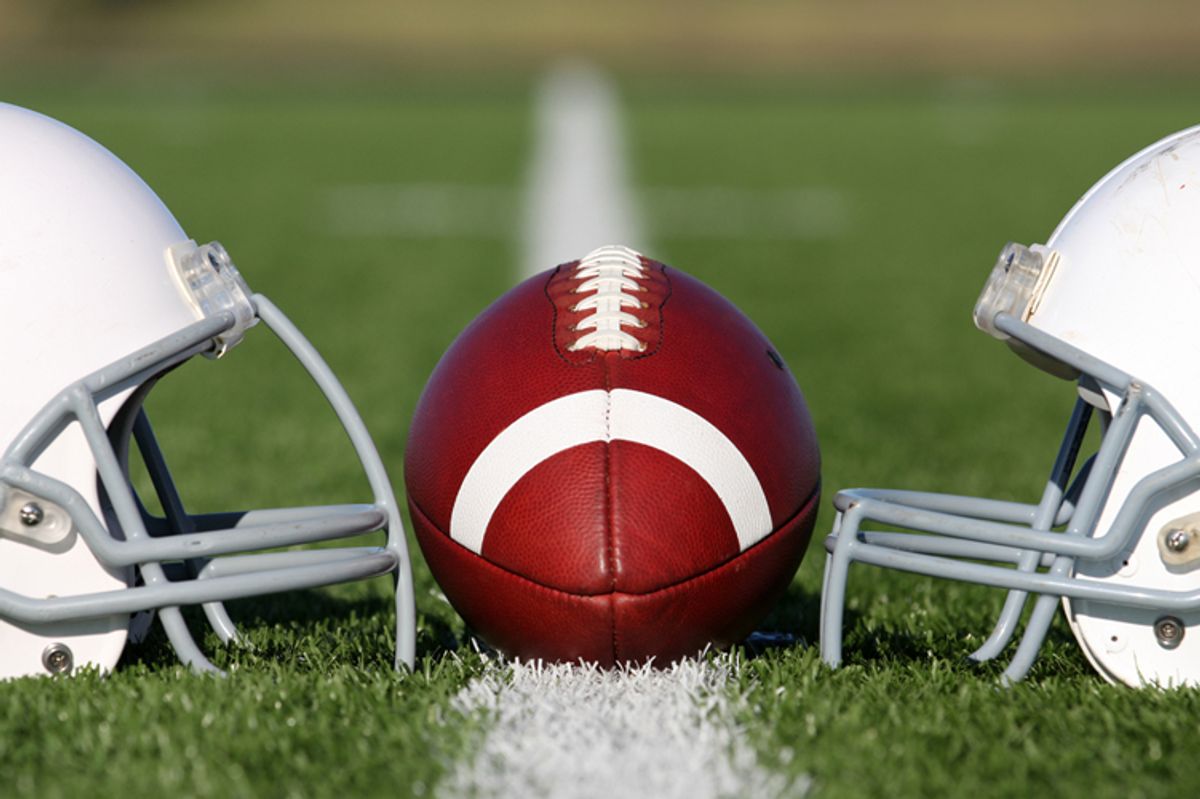 As a kid I watched football with my dad, an inveterate Texan and incorrigible Oilers fan. I collected football cards and put them in a wicker knitting basket that said on the front in needlepoint, “Enough is better than too much.” Ignoring this, I crammed it with cards for players I hardly knew, teams I had no particular interest in; I collected to collect. I would sit with my father in our basement, the ironing board behind us, our feet up on a coffee table, and organize my football cards by team or position or color while this game I hardly understood unspooled on the screen, yelling when my father yelled, cheering when he cheered.

I’m not a sports fan, as a rule. My progressive high school required that girls learn to play football, and my main memory from those gym classes is that I could throw a football with no more accuracy than I could throw anything else. I haven’t learned much in the intervening years. I remain unclear on what “intentional grounding” is. I am unsure what a neutral zone infraction consists of, and how that differs from encroachment. I don’t know who’s in what division, including my own home team, the Rams, although I do know enough to lament them, generally.

But every Sunday and Monday night during football season I am on the couch, drawn by the responsive logic of the game: players moving like pieces in a scheme, which is satisfying in the same way spy or heist movies are satisfying. If this, then this. If that, then the other. The shouting, chest-beating masculinity. The muscles wrapped up in spandex, the end-zone celebrations clearly practiced before a mirror, the physical intelligence masquerading as athletic talent, the intensity of focus on one, purely pointless endeavor. The players within their helmets remind me of a theatrical production I saw a few years ago, “Antigone” with masks, the actors learning how to speak through their motions. This is how I felt as a child, as if I’d been denied a face: wrapped up in a body that didn’t work the way I wanted it to and unable to communicate across the space between me and the world.

My father and I have had a difficult relationship. As a child I usually felt that he and I were equally strange and silent, and equally unable to reach across the gap between us. He took me fishing, and I would cast a few times, then lie in the bottom of the boat reading or reorganizing my tackle box. I would catch catfish by accident and he would have to unhook them as they (and I) squirmed, and toss them back. We went hunting, and I would shoot targets in the yard but refused to shoot a quail. He read Hemingway to me at night but, lying across his elbow, I would scan to the bottom of the page and wait impatiently for his voice to catch up.

Like him I am shy and halting in conversation, and usually prefer quiet. At least watching football, I knew when to cheer, and when to groan theatrically with disappointment, and I knew that my father and I were reacting in the same way at the same time. Our relationship has been marked by blowups and tentative rapprochement for nearly as long as I can recall, and it is not one that has changed much over the years. With adulthood, awkwardness has settled between us instead of comfort: a fear of the wrong move, a sense that a false step will shatter the peace.

When my father and his second wife were divorcing, I was determined to keep myself neutral. This was the third divorce for me as a daughter — my parents, my mother’s second husband, my father’s second wife — and I could not, I decided, keep my own sanity while engaging with the divorce in any way. The equanimity that came from this neutrality lasted precisely until the moment my father, his voice on the phone quiet with anger, said to me, “Do you know that your stepmother has put you down as a witness to testify at trial?”

I saw this as a sign that keeping out of it would be harder than I’d thought.

My father sent me emails and text messages about the divorce. They got angrier: at my stepmother, at the courts, at the world he lived in where his youngest daughter, my sister, could be in someone else’s home, out of his reach. He, like me, masks sadness in rage.

Then I got caught in it. If I wasn’t with him, I was against him. His notes started saying things like, “I have tried.” They said “why don’t you” and “you should” and “please.” They were signed, “your father.” I cried until blood vessels burst under my skin.

I didn’t let my father hear me cry. I didn’t answer his notes, either. Instead I shredded my fingernails and broke out in cystic acne that made moving my face painful. Finally I said to him on the phone, “We aren’t having this conversation.” I started screaming: “I’ve told you I won’t have this conversation with you.”

“I don’t think I’ve done anything wrong,” he said. I went into hysterics and hung up. For the next few weeks I ignored his calls, picked at my skin, and watched a lot of football.

Then my grandmother called me from Houston, where my family lives. I had decided not to visit until my father was over the divorce, or at least over talking about it with me. “We’re having a Christmas party,” she said. She sounded hopeful, which is not a tone my grandmother customarily uses. “I was thinking you might want to come. I’ll buy you a ticket. Also,” she added, “my mother is in the hospital.”

My great-grandmother is 99, although in her mind she’s been 90 for several years. She is fragile. The equation had changed. If this, then that.

I bought the ticket. “I’m staying with Grandma,” I said to my father in an email. He wrote back: “Stay with her Sunday night. Monday with me.” I didn’t respond. I was strung out with nerves; I packed my suitcase in a more obsessive fashion than usual, dividing my toiletries by type into Ziplocs, putting my shoes into plastic bags, rolling each item of clothing individually, down to underwear. I watched the Broncos beat Chicago and yelled at the screen: “You little prick,” I spat at Tebow. “You lucky overrated jackass.”

My father picked me up at the airport and I was strung tight. I hugged him with one arm instead of two, hanging on to my suitcase with the other. Don’t say anything, I thought at him, so hard he must have felt it. If you say a word about your divorce, I am back on that plane.

When my father and stepmother first split up, he got a new job and a small apartment. He cut his life down to its bones -- cookbooks, a few fishing rods, the ties and plain white shirts he had to wear to work. He lost 40 pounds. He stopped, as far as I knew, watching football. Once he called me during a game: “Who’s playing?” he asked me, and I told him — it was the Vikings that night—and he laughed a sad sort of laugh and said, “I have to ask you who’s playing.” I watched games at night knowing that my father wasn’t watching them with me.

From the airport we went for Tex-Mex. It was beautiful out, high 60s and sunny. We went in the restaurant to order and he pointed to two spots at the bar. “Why not outside?” I asked him and he grinned a little, looking sheepish, and pointed at the television over the bar: the Houston Texans, who had just clinched their first playoff spot, were on.

“Have you been keeping up with the Texans?” he asked me, as we settled in.

I told him that the games weren’t shown in St. Louis. “We have to watch the Rams.” I ordered a margarita, and drank it too fast. My head pitched a little.

“I heard commentators talking about how that Rams-Seahawks game was the worst Monday Night Football they’d ever seen,” he said. “I didn’t watch it.”

“I went to sleep in the second quarter.”

The screen kept cutting in and out, and every time it went out, the noise in the bar rose and rolled with groans. Every time it came back, there was a cheer and a collective leaning forward.

A few weeks later, during the first half of a Saints-Falcons game, I texted my father. “Are you watching this?” I asked him. “It’s pretty good.”

I knew he was sitting in front of the game with a whiskey or one of his home-brewed IPAs. I was eating kettle corn straight out of the bag, my feet on a pillow. We were waiting for Drew Brees to break the single-season passing record, which he did, beautifully, on a touchdown pass that came after such a string of missteps that it almost seemed he’d set up the drive that way on purpose.

Annalisa Grier's writing has been published online at The Awl and in print in Confrontation and is forthcoming in Cream City Review. After stints in Taiwan, France, and England, she now lives in St. Louis.