Republican presidential candidates are united on big cuts for the 1%, with little for the rest of us 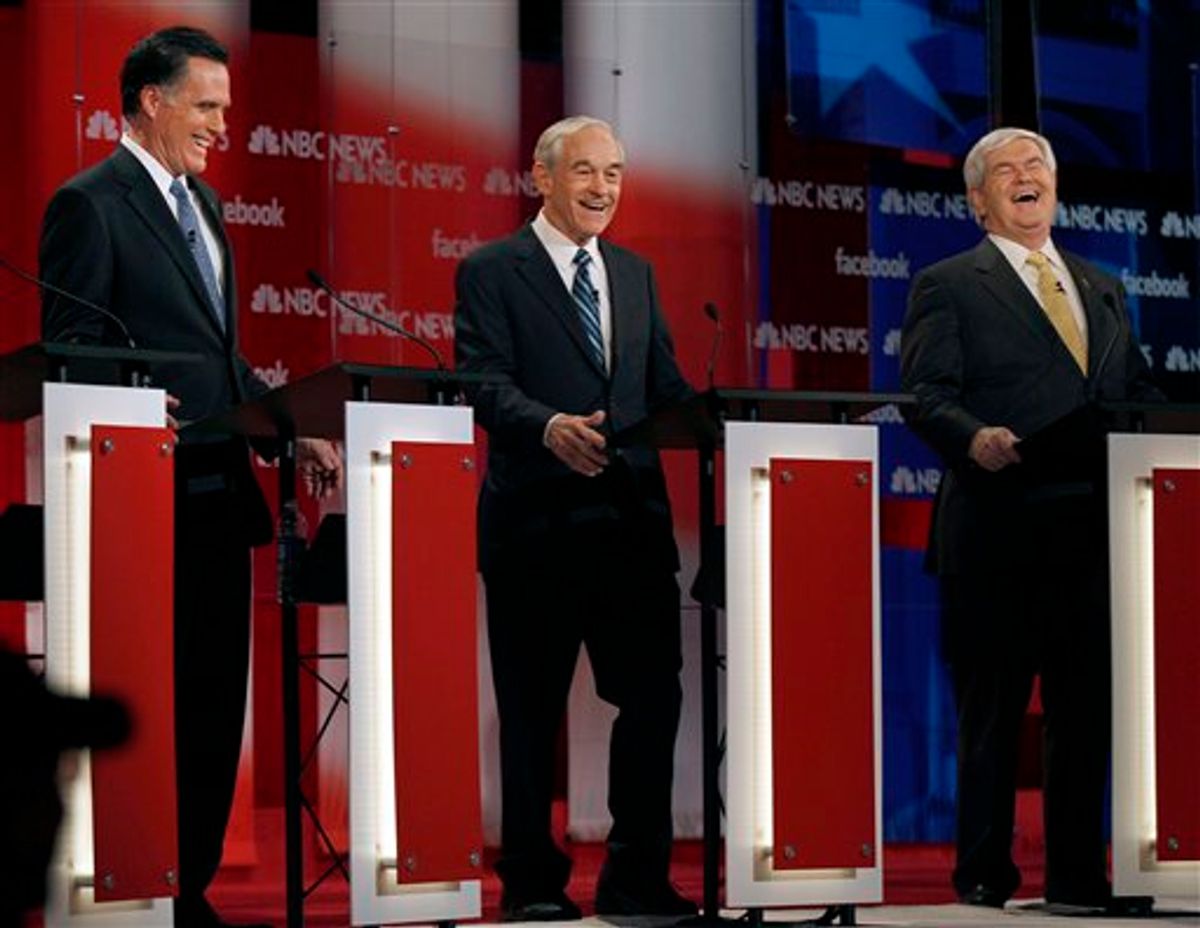 For viewers of Saturday night's Republican presidential candidate debate, drawing distinctions between the leading candidates wasn’t hard. We may disagree on whether these men are presidential caliber, but as cartoon caricatures, they're deliciously unique. Rick Santorum's sexual obsessions, Rick Perry's Texas war-mongering, Newt Gingrich's ego, and Mitt Romney's profound commitment to flip-flop, any time, anywhere, are all drawn in big, bright, Day-Glo colors. (Ron Paul is, of course, Ron Paul.)

But on one topic they are as alike as genetically modified peas in a pod. In an era in which Americans are paying historically low taxes and the government faces huge budget deficits, they are all fervently determined to give the richest Americans another huge tax break.

The Citizens for Tax Justice have crunched the numbers, and they are remarkable.

The cost of the tax plans proposed by Republican presidential candidates would range from $6.6 trillion to $18 trillion over a decade. The share of tax cuts going to the richest one percent of Americans under these plans would range from over a third to almost half. The average tax cuts received by the richest one percent would be up to 270 times as large as the average tax cut received by middle-income Americans.

The figures  are staggering. Here's a quick breakdown of how the richest one percent of Americans would stand to benefit under the different plans.

Ron Paul's tax plan isn't detailed enough to make the same analysis, but he has proposed repealing the federal income tax altogether, which, ideologically speaking, makes him a clear fellow traveler with the rest of his colleagues.

The CTJ report makes a little bit too much of the relative size of the tax cuts enjoyed by the richest Americans compared to the rest of us (for example, under Gingrich's plan the middle fifth of Americans would get a $1,990 tax cut, a mere pittance compared to the $391,300 delivered to the rich.) In a proportional system, the numbers are always going to be much bigger for the richest Americans, whether we're measuring hikes or cuts. But the report is right on the money when it points out who ends up really paying for the cuts. Affording the huge tax cuts plans proposed by the leading Republican presidential contenders will require massive cuts to government programs that primarily benefit the lower and middle classes.

Even the meager tax cuts that would go to low-income and middle-income taxpayers under these plans would almost surely be offset by the huge cuts in public services that would become necessary as a result.

GOP lawmakers in Washington are already calling for ending Medicare as guaranteed health insurance for seniors and reducing Social Security benefits, and these tax plans would make necessary even more draconian reductions in the types of public services that middle-income Americans depend on.

But it's impossible to look at the tax plans proposed by Gingrich, Romney, et al. and not understand how class warfare really works in the United States today. The rich get a huge windfall -- and the rest of us are supposed to pay for it.