Obama's Republican plan for the Pentagon

Like Eisenhower, Nixon, and Reagan, the president prunes the military just a little 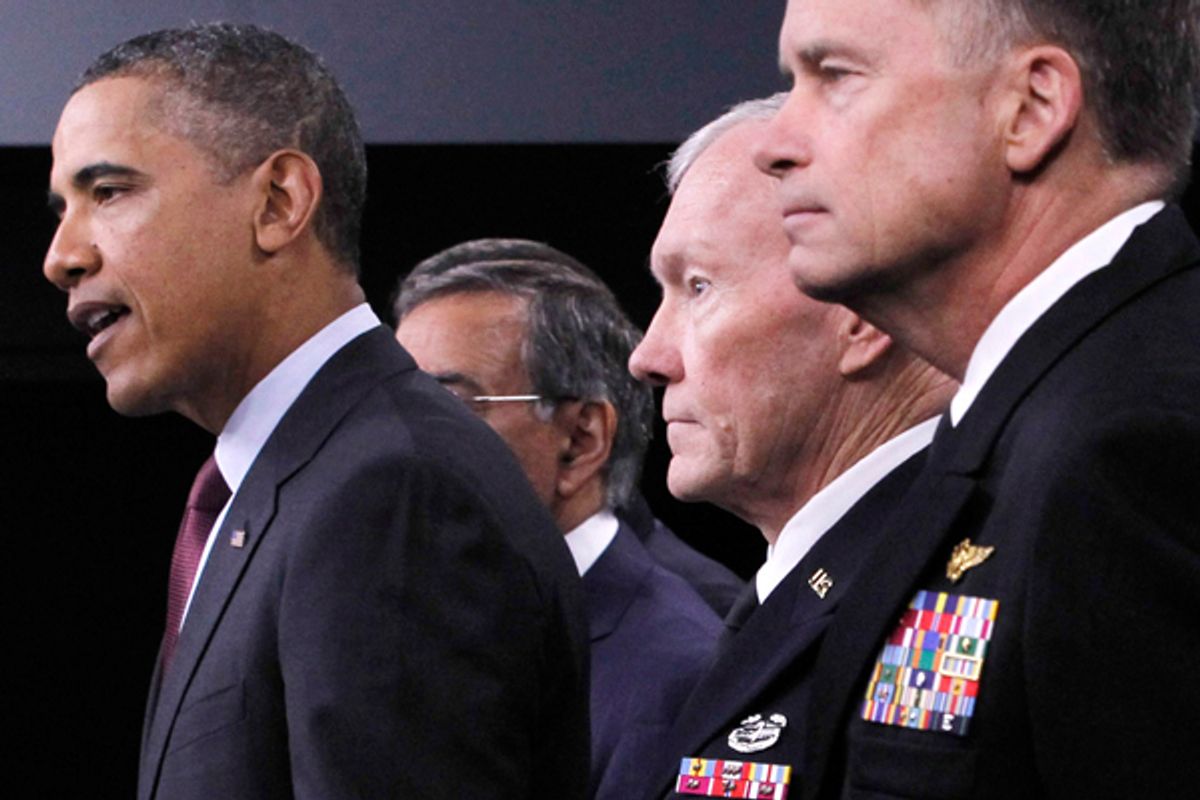 Obama and the brass (AP/Jason Reed)
--

As might be expected, President Obama’s new defense strategy and budget, which he unveiled at the Pentagon last week, was promptly condemned by many Republicans and defense hawks. Rep. Buck McKeon, the Republican chairman of the House Armed Services Committee, characterized it as “a lead from behind strategy for a left behind America” and said that “the president has packaged our retreat from the world in the guise of a new strategy to mask his divestment of our military and national defense.”

But close analysis of the Obama plan shows that he is in fact following in the footsteps of Republican foreign policy stalwarts Eisenhower, Nixon, Reagan, and H.W. Bush. These presidents changed our strategy and reduced defense spending in real terms when the United States ended wars and /or was confronting budget problems. Moreover, the cuts in spending and manpower that Obama is proposing to support his new strategy are far less than his Republican predecessors.

In 1953, as the Korean War wound down, Eisenhower conducted a strategy review, known as the Solarium project, to decide whether the U.S. should pursue a strategy of rollback or containment to confront the existential threat from the Soviet Union. Advisors like John Foster Dulles favored a strategy of using military power to roll back Communist control of Eastern Europe. Others, like George Kennan, called for containing the Soviet Union and using military and economic power to eventually bring about its demise.

Eisenhower chose containment backed by a strategy of massive retaliation. He reduced defense spending from $485 billion in 1952 to $227 billion by 1955, a reduction of $258 billion or 53 percent, which enabled him to balance the budget and undertake projets like the interstate highway system. He did this by drastically reducing the size of the armed forces, especially the ground components, and increasing our sophisticated conventional technology and nuclear weapons. Under Eisenhower, the armed forces dropped from 3.6 million to 2.4 million, a reduction of 1.2 million or 33 percent, almost all of which came from the Army and Marines which together lost 800,000 people or 44 percent.

In 1969, Richard Nixon inherited a war in Vietnam, which he promised to end, and a defense budget of $409 billion, which consumed almost 10 percent of our GDP and 43 percentof the entire budget. Five months after taking office, Nixon travelled to Guam and unveiled what became known as the Nixon doctrine. Heannounced the US would begin withdrawing from Vietnam and would begin turning the fighting over to the Vietnamese and that there would be no more Vietnams. Henceforth, the US would provide military and economic aid to requesting nations, but they would have to provide their own manpower. This allowed him to reduce the size of the armed forces from 3.5 million to 2.3 million and reduce defense spending from $409 billion in 1968 to $303 billion by 1975, a reduction of $106 billion or 26 percent. This dropped the Pentagon's share of the budget to 25 percent, resulted in a reduction of 930,000 people or 50 percent in the Army and Marine Corps, and allowed Nixon to implement social programs like the EPA and OSHA.

In 1985, after he was overwhelmingly reelected, Ronald Reagan and the Republicans in Congress recognized that as a result of his tax cuts and defense increases, he had accumulated more debt than his 39 predecessors combined. They needed to get our fiscal house in order. Since defense represented 27 percent of federal outlays, defense would have to be put on the table, and it was. In Reagan’s second term, defense spending was reduced by 10 percent in real terms.

The debt problem persisted into the administration of George H.W. Bush, and he too reduced defense spending. Even before the end of the Cold War, between 1989 and 1992, defense spending dropped from $493 billion to $439 billion, a further reduction of 11 percent.

With the collapse of the Soviet Union in late December 1991, General Colin Powell, the chairman of the Joint Chiefs of Staff, developed the two major regional contingency strategy which he said could be funded with a further 25 percent decrease in defense spending over five years. As a result, the budget dropped from $439 billion in 1992 to $360 billion in 1997, a reduction of $79 billion or 18 percent.

Compared to his Republican predecessors, Obama’s new proposals are far more modest. Yes he will reduce projected levels of defense spending, his proposal will mean a reduction in baseline defense spending of 8 percent, much less than the drawdowns that occurred after the Korean, Vietnam, and Cold Wars.

Moreover, the Obama reduction follows 13 straight years of real increases in core defense spending, the last three of which occurred under his watch. As a result,the budget soared from $360 billion in 1998 to $533 billion in 2012, an increase of $173 billion or almost 50 percent. Even with the Obama reductions, defense spending in 2017 will be almost 40 percent higher than the post Cold War low.

Compared to his Republican predecessors, Obama’s budget reductions and strategic changes are much less dramatic. Under the Obama plan, the Pentagon will spent $2.73 trillion between from 2013 and 2017. This is 4 percent less than was spent in the preceding 5 years.

Similarly, Obama’s personnel reductions are much less dramatic than previous drawdowns. He will reduce active duty manpower by about 100,000 from 1.5 million to 1.4 million, a reduction of 7 percent. Like his predecessors, Obama will make the majority of his reductions in the ground forces, reducing the Army and Marine Corps by about 100,000 or 13 percent.

Just as past presidents that have introduced new strategy that meant we would not refight Korea and Vietnam, so too did Obama decide that we should not refight the insurgencies that tied us down in Iraq and Afghanistan. Therefore, he could safely cut back on the ground forces. And just as Eisenhower and Nixon pivoted toward Europe, Obama will pivot to Asia because of the increasing power of China.

If this is leading from behind, I wonder what McKeon and his Republican colleagues would say about Eisenhower, Nixon, Reagan, and George H.W. Bush.

Lawrence J. Korb, a Senior Fellow at the Center for American Progress, served as assistant secretary of defense in the Reagan administration.