The enduring mystery of Jon Huntsman

Is he surging at just the right time in New Hampshire, or is an infatuated media cooking up fake drama? 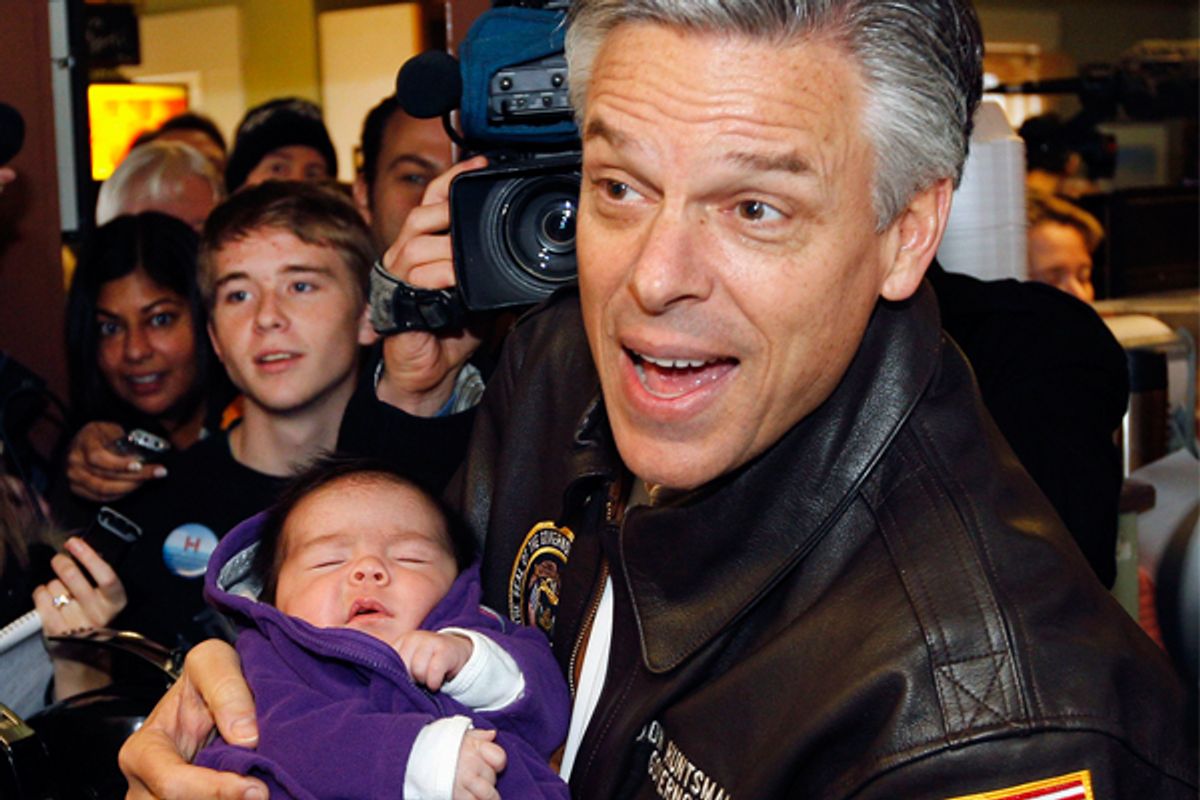 NASHUA, N.H. -- The scene at Crosby's Bakery in Nashua this afternoon, where dozens of bodies crammed into the tiny pastry shop and spilled out onto the sidewalk and into the streets, captured the central mystery of Jon Huntsman's presidential campaign. Sure, it looked like something was going on, but was the chaos the product of actual voters -- or of the press and the campaign itself?

It was hard to tell. When Huntsman's SUV pulled up in front of Crosby's shortly before 4 p.m., he was instantly surrounded by about two dozen cameras and reporters, forming a blob that slowly pushed its way to the bakery's entrance, past a collection of high school-aged Huntsman volunteers chanting "Country first!" and a throng of Ron Paul supporters (a presence at every rival candidate's events this week).  The onlookers included no shortage of media members, and reporters on the sidewalk looking for quotes were as likely to run into one another as real voters.

"It's all cameras and no people," an older woman who identified herself to several reporters as a Huntsman supporter complained as she tried in vain to make contact with him. Nearby, a middle-aged married couple explained to a reporter what they like about the former Utah governor. The man said the GOP field seemed obsessed with "guns, gays and God -- and he's not." So it was safe to say he was voting for Huntsman, right?  "I can't," he replied. "I'm a registered Democrat. But if I was a Republican or an independent, I would."

Huntsman may or may not be having a moment right now.

He's pursued a strategy of ignoring Iowa and camping out in New Hampshire, counting on the state's more secular, more independent-minded GOP electorate to catapult him into national contention -- just like Granite State Republicans did for John McCain 12 years ago. For all of 2011, he struggled to break through in polls, but in the past few days his numbers have seemed to tick up to the mid-teens -- within striking distance of Ron Paul and second place. And his campaign thinks that a dramatic moment in Sunday's final pre-New Hampshire debate in which Huntsman called Romney out for criticizing his service as President Obama's ambassador to China will help win over late-deciding voters and peel off soft Romney supporters. Hence the sign outside Crosby's that read: "Thanks, Meet the Press. Your debate did it. I'm voting for Governor Grown-Up, not Governor Grumpy."

But most -- or all -- of this late surge could just as easily be an illusion. After all, the biggest knock on Huntsman's New Hampshire strategy has always been that his natural base of support overlaps too much with Romney's -- and that Romney, by virtue of his virtual favorite son status and superior nomination prospects, is the obvious first choice for most of these voters. Thus, the best Huntsman has done in a New Hampshire poll this week has been 16 percent, while the worst showing for Romney has been 33. Maybe if Romney had fallen flat on his face in Iowa and was now in a free fall there would be more of an opening for Huntsman to eat into his support, but the best realistic hope for Hunstman now is that he somehow beats out Paul for second place with Romney claiming first by an underwhelming margin.

But even if that happens, would it matter much? The very thing that's helped Huntsman attract such disproportionate media coverage -- his willingness to criticize his party's far-right turn in the Obama era -- makes the idea of him turning around and winning South Carolina and other future contests virtually unthinkable. It seems more likely, as Jonathan Bernstein suggested on Monday, that a Huntsman breakthrough in New Hampshire would do more to hurt that state's position in the national GOP pecking order than to elevate Huntsman's own standing.

The range of possible outcomes tomorrow seems wider for Huntsman than for any other candidate. If the hints of life he's shown since Iowa aren't real, he could finish around 10 percent, and maybe even in the high single-digits, a humiliating finish that would surely push him out of the race on the spot. Or maybe his months of labor really are starting to pay off and his debate moment really did crystallize something in late-deciding voters' minds. In that case, he could finish with more than 20 percent and maybe even put a scare into Romney.