Gingrich\'s scorched earth attack on Romney leaves no doubt: Reagan-era capitalism is finally on its deathbed 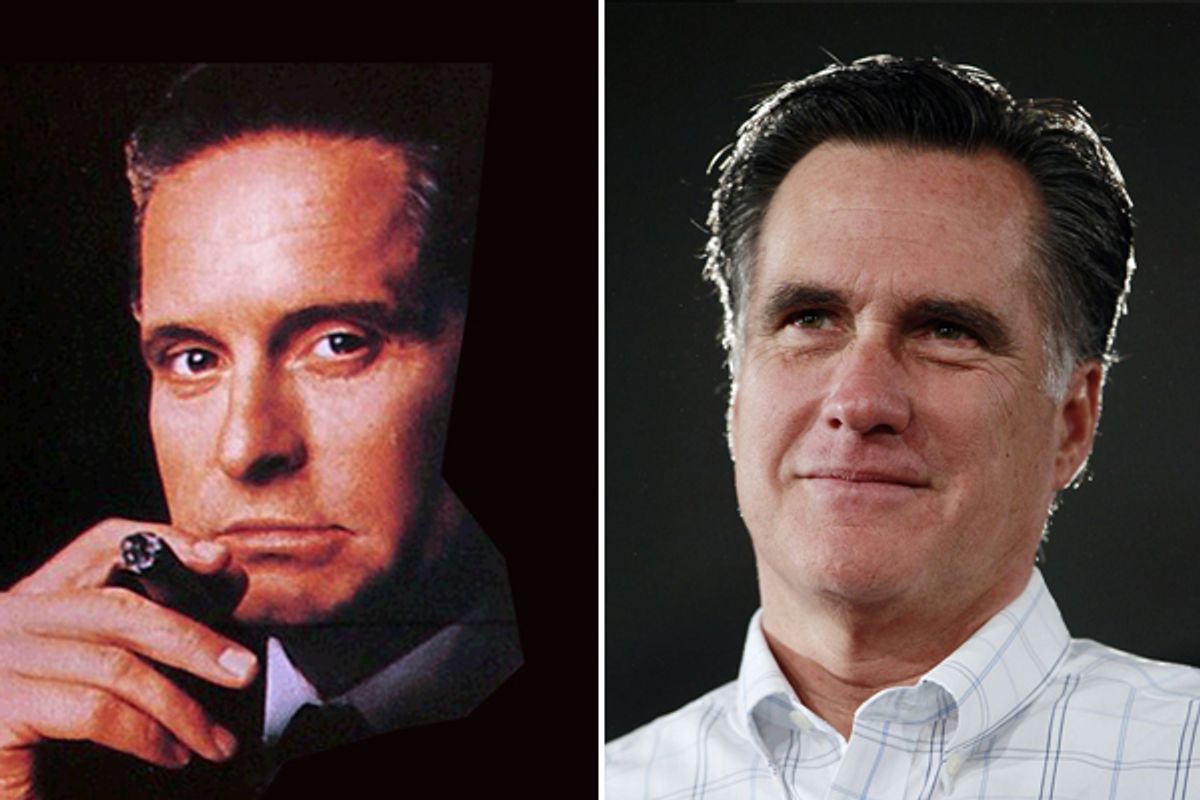 It is no surprise to see Mitt Romney attacked as a caricature of Gordon Gekko, the corporate raider immortalized in Oliver Stone's 1987 film "Wall Street." As far back as 1994, when Romney ran for the U.S. Senate in Massachusetts, Ted Kennedy successfully defeated him by utilizing that exact attack strategy. And it is in no way fundamentally wrong.

Like Gekko, Romney made his fortune buying and selling companies; and like Gekko, he believes that his "greed is good" version of rough-and-tumble creative destruction is a positive force for America, weeding out the bad performers and nurturing lean-and-mean profit engines. If you are looking for the paradigmatic exemplar of the new style of capitalism mogul launched by the Reagan revolution, Romney is your man. Michael Douglas' Gordon Gekko is merely ersatz.

The shock is to see Newt Gingrich and his financial backers channeling the Oliver Stone critique so passionately and wholeheartedly. If you have not seen the three-minute advertisement "When Romney Came to Town," the soon-to-be debuted documentary lambasting Romney as the enemy of the American worker, prepare to be flabbergasted.

"Their greed was only matched by their willingness to do anything to make millions in profits."

"This film is about one such raider and his firm."

"His mission: To reap massive rewards for himself and his investors.

And so on. Michael Moore doesn't sting this hard, and MoveOn isn't this angry. If Romney, as expected, ends up winning the Republican nomination, Obama's campaign team can relax. Their work has already been done.

Much is being made of whether Gingrich has broken some sort of unspoken code of Republican primary collegiality by declaring class warfare on Romney. As Jonathan Chait argues, you can question whether a fellow GOP candidate is a true conservative, but to call him a "plunderer" is, or should be, beyond the pale. Plundering is what capitalism is all about! The free market is supposed to be built on the principle of unrestrained plunderation. Or it would be, if Democrats didn't keep getting in the way with their socialist-leaning regulations.

But the more interesting, deeper point to be made here pinpoints one of the great ironies of post-Reagan American history. In 1987, "Wall Street" served as a vehicle for a left-wing attack on the emerging values of the Reagan era. There was a new kind of capitalism in town, and Oliver Stone made a passionate case for its wrongness, for its destructive elevation of the concept of shareholder value at the expense of all else.

But Oliver Stone lost that battle. The movie made a lot of money but it didn't make a dent in an emerging bipartisan consensus that yes, greed was good, and anything that restrained Wall Street from pursuing its vision of how capitalism should be practiced was bad.

In 1987 Newt Gingrich was a congressman from Georgia who made news by successfully bringing ethics charges against Democratic House Speaker Jim Wright. The historical record does not easily reveal whether he expressed a public opinion on the movie "Wall Street" that year, but it doesn't seem like a stretch to imagine that, if asked, he would have dismissed Oliver Stone's assault on Wall Street as liberal folly. And indeed, seven years later, Gingrich led the historic Republican takeover of the House of Representatives, a feat that can be regarded as cementing the Reagan impulse toward deregulation in place.

He had help, of course, from Bill Clinton, Robert Rubin and Larry Summers, all of whom agreed, at the time, that letting Big Capital do as it pleased was the best economic policy for America. But Gingrich deserves special credit. During the Clinton interregnum, Gingrich kept the flames of the conservative revolution burning brightly.

As CEO compensation exploded and income inequality grew -- a transformation aided and abetted by Mitt Romney and Bain Capital, as Benjamin Wallace-Wells details in his superb New York magazine article, "The Romney Economy" -- the view that maybe, just maybe, our country had taken a horrible wrong turn became further and further marginalized. Even the great eruption of the financial crisis, which some of us thought at the time would absolutely, positively force a deep rethinking of the relationship between Wall Street and the government and the working man, hardly seemed to cause a ripple. It was as if terrorists blew up the train track, and the locomotive chugged right along, undamaged.

Until 2011. Until Occupy Wall Street. Until, suddenly, it was the 1 percent who became marginalized. Until the political power of Main Street anger matured, stunningly, into a politically potent force. There is no better demonstration of this than the fact that Newt Gingrich is now wearing a Leon Trotsky mask, or that Jon Huntsman is saying that, if elected, he would break up the big banks and Rick Santorum is declaring that a "commander-in-chief is not a CEO."

What the Wall Street Journal euphemistically calls "the rougher side of American capitalism," in its Monday article examining the legacy of Bain Capital, is suddenly no longer in fashion. And there is no better proof of this than the spectacle of one of the great culture warriors of our time, Newt Gingrich, defecting to the other side.

His treason won't help his sorry campaign, and won't deflect Romney's path to the nomination, but it is still well worth our attention. Because the power of its attack highlights Romney's biggest vulnerability. In the 32 years since Ronald Reagan was elected president, there has never been more widely expressed antagonism and anger toward the practitioners of corporate-raider, leveraged-buyout, excessively compensated CEO, shareholder-value capitalism than there is now.

And that's Mitt Romney. That is who he is. He can flip-flop about everything else, but there's no way to wriggle out of his essential nature. He's the 1 percent -- even Newt Gingrich says so.