Just when things were finally looking good, a pro-Newt casino magnate dumps millions into an effort to ruin him 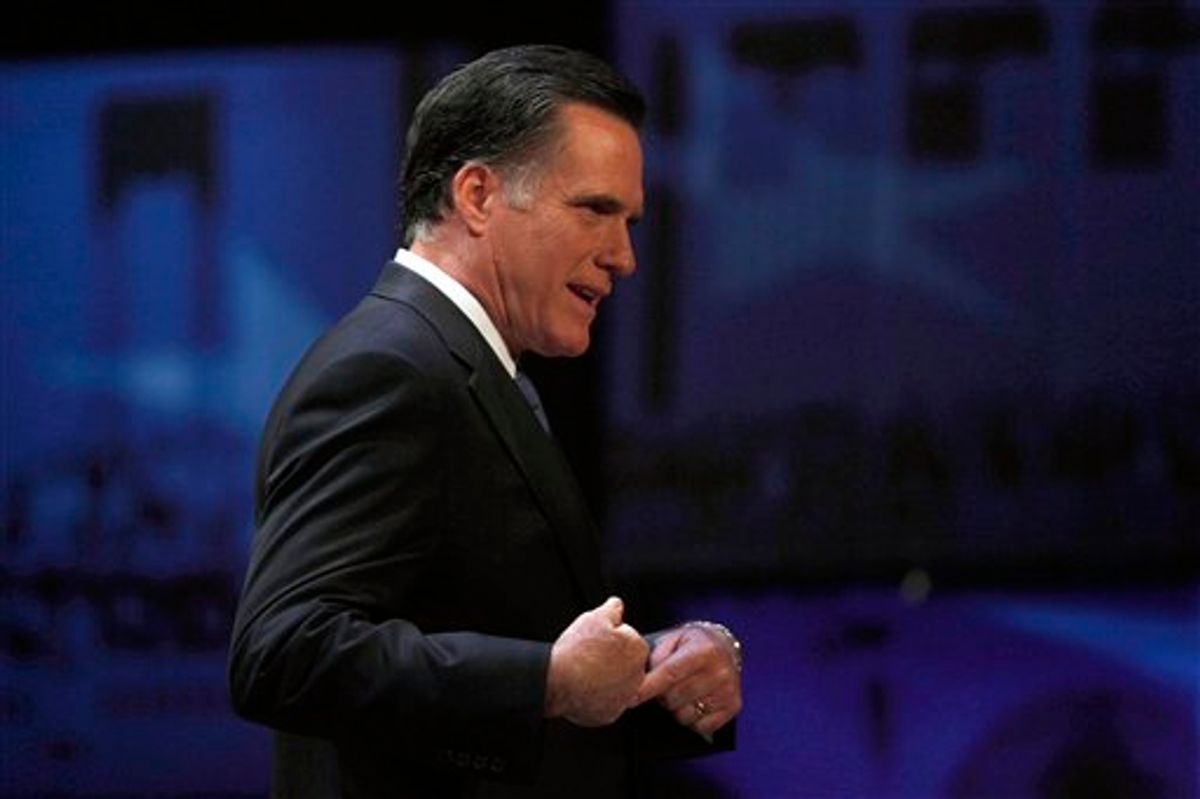 Former Massachusetts Gov. Mitt Romney reacts as he walks off the stage after a Republican presidential candidate debate at the Capitol Center for the Arts in Concord, N.H., Sunday, Jan. 8, 2012. (AP Photo/Charles Krupa) (AP)
--

The biggest development in the Republican presidential race doesn't have much to do with the New Hampshire primary. It's the news, reported late Sunday night by the New York Times, that a pro-Newt Gingrich Super PAC has received a $5 million donation from Sheldon Adelson, a casino mogul and close Gingrich ally, and is pouring the money into a South Carolina advertising campaign aimed at taking down Mitt Romney.

The ads will apparently portray Romney as a job-destroying corporate raider and feature interviews with people who lost their jobs when Romney's venture capital firm took over their companies. This poses two threats to Romney, an immediate one in the GOP primaries and potentially a longer-term one, with Democrats itching to caricature him the exact same way in a fall campaign.

At the moment, Romney has maneuvered his way into an enviable position in the GOP race. His razor-thin Iowa victory last week has elevated his national poll numbers to levels he failed to attain for all of 2011 and helped push him to a commanding lead in South Carolina, a state where he finished a distant fourth in 2008 and where his moderate past, Northeast roots and Mormon faith are all seen as particularly problematic. He's also poised to score a comfortable victory in Tuesday's New Hampshire primary, and despite (or maybe because of) Rick Santorum's surprising Iowa showing, the conservative base is no closer now to uniting behind a consensus Romney alternative than it has been all campaign. If Romney can roll a lopsided New Hampshire victory into a South Carolina triumph, it's hard to see how anyone will touch him on his way to the nomination.

But the pro-Gingrich PAC's move is a serious curveball. A similar blitz aimed at Gingrich by a pro-Romney PAC helped cripple the former House speaker in Iowa, knocking him from the front-runner's spot in early December to a distant fourth place finish with just 13 percent of the vote. The most recent poll has Romney posting his best-ever South Carolina numbers, with 37 percent. Rick Santorum was in second place in that survey with 19 percent, followed by Gingrich at 18, underscoring how Romney is benefiting from the split conservative base.

One question is how severely the anti-Romney ads will hurt him in the Palmetto State -- enough to make the race close again? Or to cost him a first place finish? Or to push him lower than second place? It's worth remembering that the anti-Gingrich spots in Iowa were amplified by an informal campaign by key Republican opinion-shapers to undermine the former speaker, so it's unclear what was more devastating -- the actual ads or all of the anti-Newt voices that suddenly filled the free media. It's possible that those same opinion-shapers, or others like them, will rush to Romney's defense in South Carolina and minimize the ads' impact. Or maybe they'll join the pile-on.

The other question is whether Gingrich will be the clear beneficiary of any Romney fall in South Carolina, or if Santorum (and maybe even Rick Perry, who is still running) will split the spoils with him. Santorum, after all, received almost twice as many votes as Gingrich in Iowa and may end up finishing ahead of him in New Hampshire. Gingrich says his goal is to slow the Romney train, telling the Christian Broadcasting Network that "the longer this goes on, the more clear it is how un-conservative his record is, the more difficult it will be for Romney to survive in this race." On CBS Monday morning, he said it will be clear to Republicans in South Carolina that the race is a two-way contest between him and Romney.

Even if Romney survives, the ads could provide a nice fall blueprint for Democrats, who are already starting to draw attention to the unflattering aspects of Romney's business background. In a way, then, the pro-Gingrich PAC's move calls to mind an attack on the Massachusetts prison furlough program that a desperate Al Gore launched against Michael Dukakis in the final days of his 1988 campaign for the Democratic nomination -- which was how Republican researchers ultimately found out about Willie Horton.