The rise of the political lie 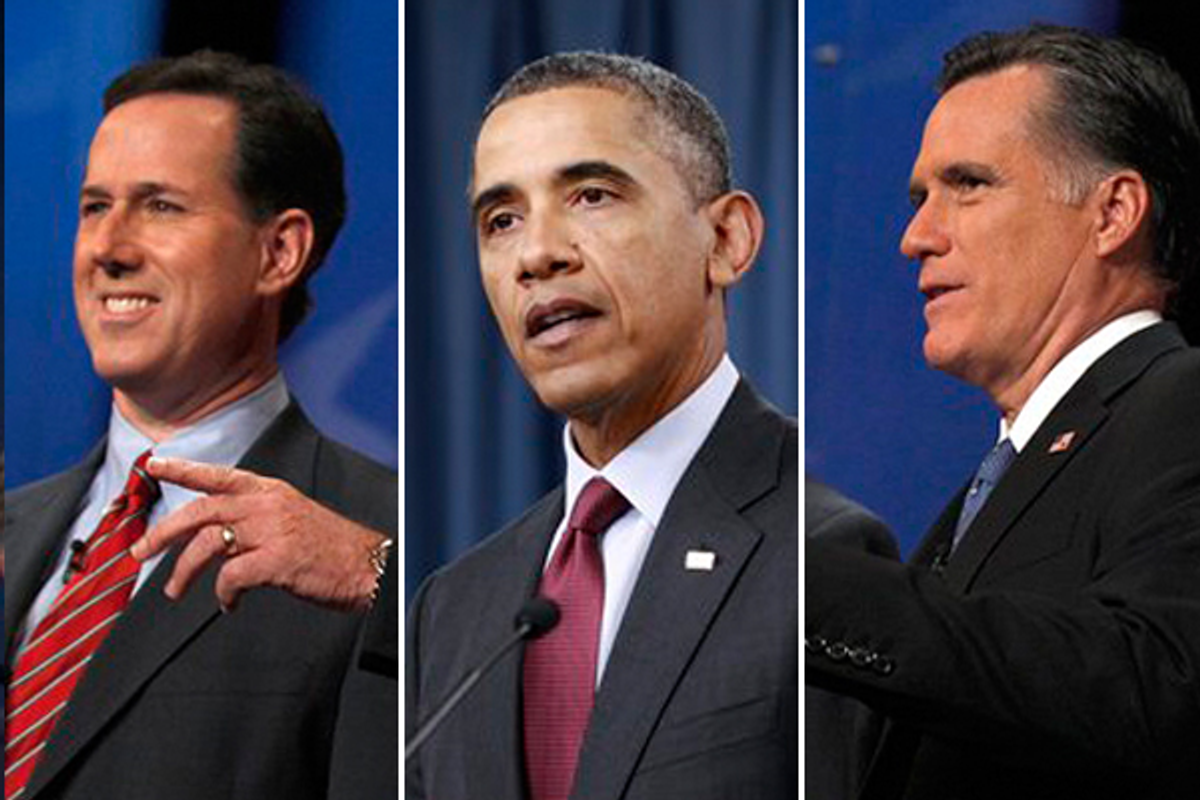 Rick Santorum's latest foray into the swamp of rank bigotry (and it is, indeed, only his latest) is notable not merely because it threatens to become a humorous Twitter meme about a new color called "blah," nor merely because it is yet another "Back to Our Future"-worthy example of how the race-tinged "welfare queen" rhetoric of the 1980s persists in this allegedly "post-racial" era. It's also important because his almost-too-hard-to-believe denials mark yet another step toward realizing Newspeak George Orwell's prophecies.

To review: Santorum recently told an Iowa audience that “I don’t want to make black people’s lives better by giving them somebody else’s money.” When asked about the comments a few days later, he insisted he never said "black" -- even though the video shows he clearly did. For sheer balls-out-ness, Santorum's denial takes the cake for expressing such open disdain for the verifiable truth -- and in the process, it threatens to set new standards for how we distinguish between honesty, spin, truthiness and totally unacceptable lying.

In the 1970s, Watergate taught us to expect a cycle of dishonesty followed by coverup -- with at least some negative ramifications for the liars when the coverups were exposed. In the 1980s and 1990s, the Iran-Contra and Clinton-Lewinsky scandals underscored the persistence of that cycle, but essentially eliminated the consequences for the lawbreaking and lying, respectively. Then came the 2000s, in which the Bush administration's case for the Iraq War didn't just employ chicanery when talking about Saddam Hussein's supposed weapons of mass destruction, but employed it without any subsequent contrition -- much less consequences -- once the country learned of intelligence cherry-picking and wholesale fabrication.

After the election of Barack Obama, many hoped this trajectory would be reversed. In the new president, optimists saw a straight shooter rather than what we've come to know -- a president who only seems so earnest because he dissembles without even so much as an explanation when his fibs are exposed.

Unlike the Bush administration, which at least coupled its refusal to apologize with post-facto spin purporting to explain what happened ("the intelligence was wrong!"), Obama has set a standard whereby politicians today will simply lie without bothering to offer a justification -- even a far-fetched or dishonest one -- for their dishonesty. This is a president who explicitly promised to shut down the prison at Guantanamo Bay, respect Congress' constitutional power to declare war, renegotiate NAFTA and end warrantless wiretaps -- a president who said he was "tired of watching as year after year, candidates offer up detailed healthcare plans with great fanfare and promise only to see them crushed under the weight of Washington politics and drug and insurance lobbying once the campaign is over." This same president, of course, has kept Gitmo open, scoffed at the War Powers Act, refused to re-open negotiations over NAFTA, continues warrantless wiretaps and worked closely with lobbyists to craft a healthcare bill that has ended up being a financial boon to the drug and insurance industries -- all while the healthcare crisis gets worse for average Americans. Importantly, in each of these reversals (which are only a few among many), Obama hasn't even offered up a rationale -- not even a "Look, I just changed my mind." Instead, he's either ridiculed the notion of expecting him to be honest (“This is fun for the press to try to stir up whatever quotes were generated during the course of the campaign"), or said nothing at all.

In light of that, can we really be surprised by Santorum? Here comes this prospective Republican president looking to dredge up old racist narratives about black welfare queens. He probably never thought he'd get called out on it -- after all, it's a GOP primary where such dog-whistle bigotry is par for the course. So when, unexpectedly, he is questioned about his attempt to racialize a discussion of welfare benefits, he just channels the moment's larger zeitgeist of dishonesty by insisting he never actually said what he said -- even though his statement was caught on film, and even though that film has been replayed to him. In this, he is simply nudging the standard even further toward Orwell's vision of a land where political figures feel empowered to say up is down and water is not wet -- a dystopia where proud disregard for the truth is the new blah.

Santorum, no doubt, has plenty of co-conspirators in his standard-setting efforts. Former Defense Secretary Donald Rumsfeld, for instance, has denied that he said he knew where Iraq's supposed weapons of mass destruction were -- despite the  Seattle Post-Intelligencer noting the existence of an extensive video record showing that "in the weeks preceding the war, Rumsfeld flatly claimed to know the whereabouts of Saddam's WMD arsenal." Similarly, Republican presidential candidate Mitt Romney once indignantly lashed out at anyone who tried to say he was against a woman's right to choose an abortion -- and yet now presents himself as the antiabortion choice in the Republican primary. And Gov. John Hickenlooper, already being touted as a 2016 presidential contender, runs around Colorado declaring, "I am the biggest supporter of education you can imagine," all while pushing the largest education budget cuts in the state's history.

No doubt, there's probably an example of such unchallenged duplicity in your state or community. The real question, then, is not why Obama, Santorum, Romney, Hickenlooper or any similar politicians so brazenly lie. With such dissemblers still enjoying political viability, the question is why they can lie with impunity?

One big reason is a lack of regular media accountability. Simply put, reporters rarely ask a politician to square their actions or current statements with their past actions or statements to the contrary because, as Rolling Stone's Michael Hastings' new book shows, most reporters are more interested in stenography than journalism. In cost-benefit terms, that means lying becomes just another perfectly rational -- if unethical -- tactic.

Thus, Obama can lie his face off during the 2008 campaign, banking on the fact that no reporter (or even Democratic-aligned grass-roots advocacy organization) will challenge him when he's president, just like Romney can lie his face off during the campaign, expecting he'll never get pushed about it, just like Hickenlooper can bill himself as the Superman of education while gutting education funding and know that the same Colorado media that fulminates about him running for president will never bother to question him about his education deceit. Indeed, so rare is such adversarial journalism that Obama literally ridiculed it as "fun" -- like some rare practical joke. In light of all this, it's quite shocking that that CNN reporter John King actually asked Santorum about his race-tinged comments (and, while not to take credit away from King, the anchor only did so after the head of the NAACP rightly forced the issue).

Another reason politicians today can lie with impunity is the fragmentation of communication itself.

It seems counterintuitive that political lying would become even more pronounced in the age of 24/7 news, YouTube, Facebook and partisan media outlets pushing out ideologically advantageous content -- that is, the age in which every public statement is being meticulously documented, archived and weaponized. But for all the hype about "going viral," political content today tends only to do so within its own ideologically isolated bubble, which lessens the electoral consequences -- and deterrent effect -- of getting caught.

Sure, Santorum's "blah people" lie and Romney's incessant flip-flopping will be harangued on MSNBC -- but Santorum knows MSNBC's audience was never going to vote for him anyway, and he knows the GOP primary voters he's courting will almost certainly never see the dishonesty, because they are ensconced in a wholly separate media bubble that will effectively censor it. Likewise, Obama's lies will be endless fodder for Fox News, but he knows many liberals will never hear about them because they live only in an MSNBC bubble -- one that isn't all that interested in objectively scrutinizing his record. And both of them bet that the Silent Majority -- the millions of non-political junkie voters who actually decide elections -- remain in the dark, either not hearing about the lies at all, or viewing them as innocuous background noise.

That last point gets to the final problem: Even if lying was regularly exposed and scrutinized in front of every voter, we have already been conditioned to no longer see lying as cause for outrage. Instead, lying is seen as a synonym for politics itself, to the point where bringing up a particular candidate's lies is to be attacked as a "purity troll" by that candidate's head-in-the-sand loyalists. To them and to so many Americans, to expect -- or to, God forbid, electorally demand -- anything other than naked, to-your-face lying is at best "unrealistic" or, more often, traitorous blasphemy.

Now it's certainly true that Santorum may have made a bad bet -- in denying he said something that was caught on film just days after he said it, he may have butted up against the hard boundary between tolerable and intolerable. After all, there can sometimes be such unseen limits, even in areas where there appear to be no standards at all anymore.

As proof, take our views about the intersection of sex and politics. No doubt, they have been relaxing over the years -- for example, Bill Clinton's enduring popularity proved it's now politically palatable for a president to get oral sex from interns, and Newt Gingrich's reemergence shows it's now politically palatable for a House speaker to cheat on his second wife with a young congressional staffer while impeaching a president for undermining "family values." At the same time, though, Rep. Mark Foley's ostracism shows that we will not accept a sitting male congressman sending sexually suggestive messages to male pages and John Edwards' banishment shows that America will not accept someone shagging a campaign groupie sans condom -- and allegedly making sex tapes with said groupie -- while still married to a stricken cancer victim.

It may be the same dynamic for Santorum and Orwellian dishonesty -- while America may be fine with candidates like Obama lying about their public policy goals and we may be OK with candidates like Romney misrepresenting their previous positions, we might not accept someone saying one horrifically racist thing on camera, and then, within a few days, insisting he never said it. However, if Santorum does in fact pay an electoral price because of his statements (as he should), don't think that means we still have admirable standards. Considering how much lying we already accept, there's not much to celebrate.