So much for “World War III” and “the Long War” 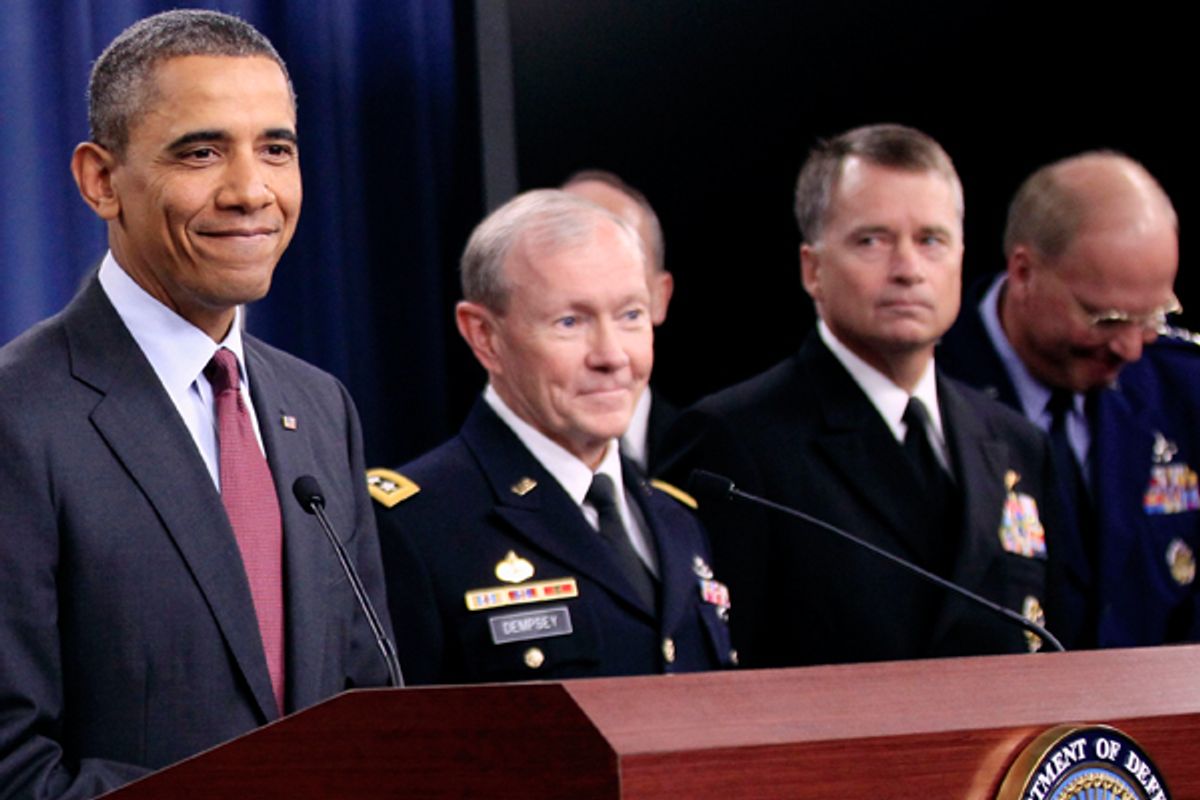 While the media has focused on the Republican presidential primaries, offstage the greatest revolution in American foreign policy in a generation has occurred, with little discussion or debate surrounding its announcement last week by President Obama.

The relative lack of controversy marks a contrast with the last great transformation of American foreign policy, which took place at the end of the Cold War.  Even before the fall of the Berlin Wall in 1989 and the dissolution of the Soviet Union in 1991, it was clear that the Soviet-American conflict that had structured U.S. foreign policy since the late 1940s was coming to an end.  For several years there was a vigorous debate in the mainstream media as well as expert circles about what should replace the Cold War strategy of containment of communism as the basis of American grand strategy.

Isolationism was championed by some like the conservative commentator Patrick Buchanan.  Another alternative, championed by scholars like Stephen Walt and John Mearsheimer, was “realism” — a policy of selective engagement of the world that emphasized the national interest and minimized attempts by the U.S. and other outsiders to remake foreign societies.  Yet a third alternative was liberal internationalism, a strategy founded on an attempt to realize Woodrow Wilson’s dreams of collective security based on international institutions like the United Nations and NATO.  The fourth alternative has been described as “hegemony” or “empire” — a policy of indefinite American global military domination. This view was backed most vigorously by the neoconservative pundit Charles Krauthammer and William Kristol’s the Weekly Standard.

The post-Cold War debate was vigorous and did not necessarily follow party lines. The right, for example, was divided among hegemonists, realists and isolationists, while progressive views on American strategy ranged from neo-isolationism to versions of American hegemony.

The great debate about American strategy came to an abrupt end with the Gulf War in early 1991. The ease with which America’s armed forces defeated the regime of Saddam Hussein, who was left in power and contained in part of his territory, convinced America’s foreign policy establishment that the benefits of America’s global hegemony as the “sole remaining superpower” were great while the costs were extremely low. The new bipartisan consensus was consolidated during the Wars of the Yugoslav Succession, when triumphant “humanitarian hawks” insisted that anyone who opposed U.S./Nato intervention in the Balkan wars was an immoral appeaser of Nazi-like evil.

On 9/11/2001 the al-Qaida attacks cemented the consensus even further.  Until then, the maintenance of a U.S. military that had been only moderately downsized from its Cold War proportions had been justified by the grossly exaggerated threats alleged to have been posed by “rogue states” like Iraq and North Korea and Iran.  Now there was a new enemy to justify a huge, global U.S. military: stateless terrorism.  Absurdly, many American statesmen and foreign policy experts treated jihadists not as criminal gangs comparable to the mafia and drug cartels but as soldiers of a virtual superpower, comparable somehow to Nazi Germany or the Soviet Union.  Post-9/11 panic, cynically stoked by conservatives for electoral purposes, added layer on layer to a clumsy, labyrinthine homeland security bureaucracy while justifying spending on Pentagon weapons systems whose usefulness in fighting jihadists was slight or nonexistent.  The neoconservative scholar Eliot Cohen and the neoconservative editor Norman Podhoretz declared that the U.S. was engaged in “World War IV” (World War III having been the Cold War).  Others called it the Long War.

Well, World War IV is now over, according to President Obama.  The Long War turned out not to be all that long.

In announcing the new orientation of American security strategy last week, the president emphasized that the U.S. will maintain its position as the leading military power in the world; no president, in this generation, could do otherwise.  What is striking, however, is the speed with which the Obama administration has not only wound down the wars in Iraq and Afghanistan but repudiated the post-1989 consensus.

According to the new vision of American defense, the U.S. will reorient itself from fighting wars of nation-building and counterinsurgency in the Muslim world to focusing on balancing the power of rising states in East Asia (read China).  This reflects the classic logic of realpolitik, not neoconservative hegemonism or neoliberal Wilsonianism.  The shift in emphasis from quasi-colonial nation-building, which requires many American boots on the ground, to strategies that rely more on local allies, special forces and the (morally and legally problematic, it should be said) use of drones represents another break with the strategy of the Bush/Cheney years.

Needless to say, this is not enough of a change for isolationists on both sides of the spectrum who would not be satisfied unless the U.S. ended its participation in power politics beyond its borders and reduced the Navy to the Coast Guard.  And it may very well be that some of the proponents of the new strategy themselves think that it can achieve what the scholar David Calleo has called “hegemony on the cheap.”

But hegemony on the cheap is not hegemony.  Those of us who criticized the hegemony strategy from the late 1980s argued that, while in theory the U.S. might be able to create something like a global empire, the American people would not be willing to pay the required price in blood and treasure.  The relative swiftness with which the public turned against the wars in Iraq and Afghanistan, even though the fatalities were far lower than those in Korea and Vietnam that ultimately undermined public support for those earlier wars, proved that the American people never bought the “World War IV’ scenario.  Notwithstanding the horror of 9/11, Americans considered the stakes of the misnamed “war on terrorism” to be relatively low, and so they were willing to pay relatively little (by historical standards; for service members killed or maimed in these recent wars and their families, the costs could not have been higher).

While it marks a great improvement over the semi-imperial hegemony strategy embraced in the 1990s and 2000s by neoconservatives and neoliberals, the neo-realist strategy of the Obama administration can be criticized.  For example, the idea that China can be contained by U.S. forces prepositioned in Japan and South Korea and Australia (Australia?) just seems silly, as well as needlessly provocative.  There is really no parallel between U.S. troops stationed in a divided Europe to deter the Red Army and American naval and Marine bases scattered around Asia and the Pacific.

If, God forbid, there were a Sino-American Cold War II, it is extremely unlikely that it would escalate into Sino-American naval clashes in the South China Sea or the Straits of Molucca — to name only two implausible scenarios used sometimes to justify spending on old-fashioned surface fleets. More likely, conventional as well as nuclear deterrence would prevent direct conflict among the great powers, whose competition instead would take the form of low-level proxy wars in war-torn countries in Asia, Africa, the Middle East and Latin America, with the rival great powers arming and supplying opposing sides. Fantasies of a replay of the duels in World War I of the Japanese and American navies, with a future Chinese fleet replacing Japan’s, are just fantasies.

American strategy is a work in progress, and the ultimate shape of America’s next national security policy will result from struggles in Congress and the courts as well as this and future presidential administrations.  But Barack Obama deserves credit for quietly bringing to a close the misguided bid for quasi-imperial hegemony that led America astray into the sands of Iraq and Afghanistan.

As I have argued elsewhere, Obama is an Eisenhower Democrat, owing more to an older generation of moderate Eisenhower or Rockefeller Republicans than to New Deal Democrats like Franklin Roosevelt, Harry Truman, John F. Kennedy and Lyndon Johnson. In domestic policy, this is a flaw, inasmuch as Obama is drawn to the traditional moderate Republican obsessions with balanced budgets and privatized provision of public goods. But in foreign policy, the Modern Republican legacy of Dwight Eisenhower, who sought a low-cost “New Look” strategy in the Cold War, and Richard Nixon, who sought to cut America’s losses in Indochina and to base American strategy on realpolitik, is of more relevance to today’s world than the kind of overcommitment symbolized by John F. Kennedy’s grandiloquent boast in his first inaugural address that Americans would “pay any price, bear any burden, meet any hardship, support any friend, oppose any foe, in order to assure the survival and the success of liberty.” Even before the Great Recession, Americans were unwilling to pay any price and bear any burden to ensure a global Pax Americana. That may explain why, outside of the neoconservative circles, criticism of the Obama Doctrine has been so limited. The American people are tired of foreign wars and ready for nation-building at home.