Our history of cheating

Ben and I were unfaithful in previous relationships. By reading books from the past -- could we predict our future? 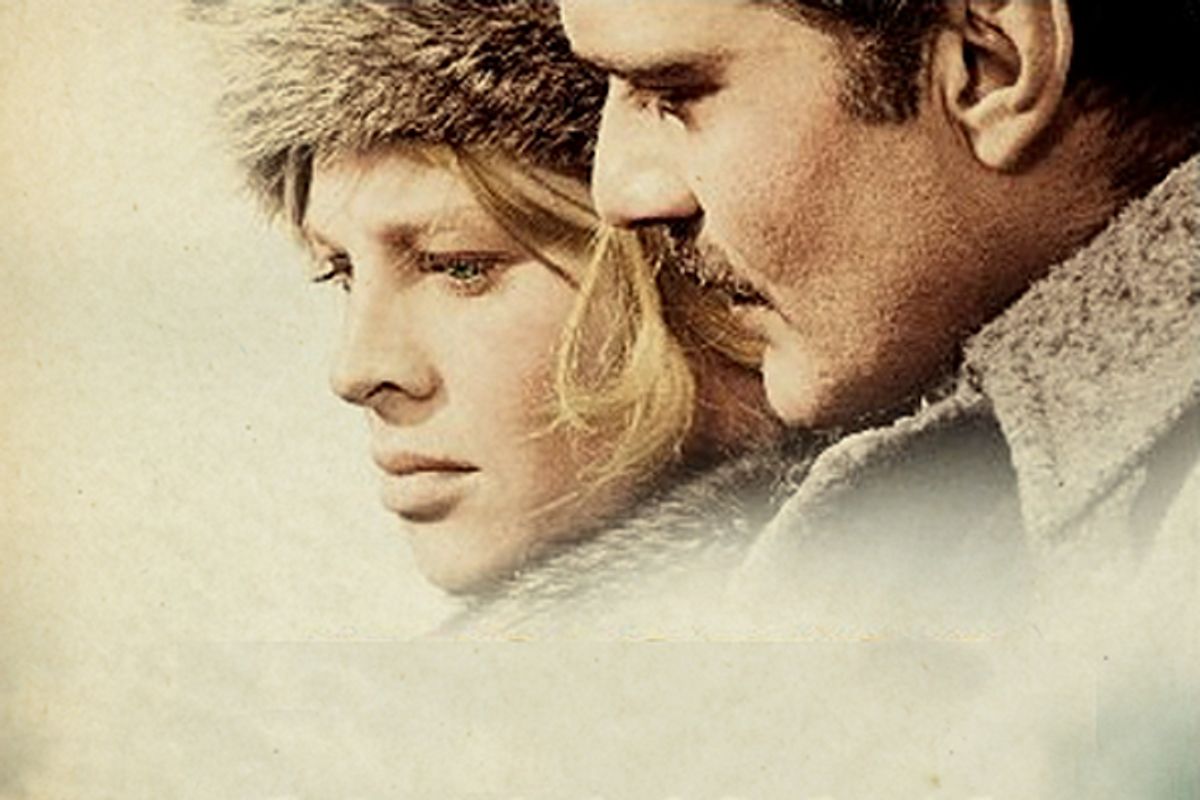 My boyfriend and I have fidelity issues. We haven’t strayed lately -- at least, I think. But we both have a history of it. This was something we admitted to each other on our first date. The Greek chorus screeched so loudly when we decided to go out again, my ears still throbbed the next morning.

I want to feebly premise this by saying that we are both nice people. Ben especially (though Ben is not his real name). He spends much of his career helping others, and is adored by everyone he meets. I don’t know if this counts as much, but my hobby is chasing down lost pets and finding their homes. We both rabidly loved our wronged former partners, all of them. But that’s not the point, because it never is. Cheating is not about love.

The relationship proceeded in a cautious yet positive manner, despite our unsuccessful pasts. We are both writers, so we had enough to talk about. (Space breaks! Semicolons!) We fought well, which I always find important. I liked to watch him rearrange my books; I appreciated the scuff marks his boots left in the kitchen. The dog grew fond, after a mourning period. Ben just seemed to fit.

Yet still the nagging problem: our wandering eyes. At first, this reared its head in a disappointingly expected manner. “You should still see other people,” he said one afternoon, looking up from “The Death of Ivan Ilyich." “I’m still pretty hung up on the last one.”

It’s not as if I hadn’t heard this line before. (Another classic: “I never said I wanted a girlfriend.”) With other boyfriends, I’d cried. But this time, I was uncharacteristically calm. Maybe the thing to do, I thought, was just try it.

The more I pondered it, the better it sounded. Yes! An open relationship! Still, I needed some reassurance that this wasn’t completely stupid. Some people, in this situation, would seek advice from friends, or perhaps some data from sociological institutions, like the highly regarded National Marriage Project. But I already knew my friends would say that I was fooling myself, and data bores me. So, I turned to my most trusted source: fiction.

I didn’t have to look hard for examples of adultery in literature. In fact, the steam seemed to rise from my bedside table as I tentatively fingered the Salter and the Berriault. Of course, in most examples, stepping outside of a relationship brings ruin and misery. Emma Bovary’s death, for example: “Her chest soon began heaving rapidly; the whole of her tongue protruded from her mouth; her eyes rolled, grew paler, like the two globes of a lamp that is going out.” Pretty unappealing. Then there is April Wheeler in “Revolutionary Road,” who bleeds to death after violently aborting her own child when her adulterous marriage goes sour.

And yet, I was determined. There had to be instances of successful open relationships somewhere in the stacks. After all, it happens, doesn’t it? In France? Utah? After a few days, I found some Updike stories where both husbands and wives seemed quite tolerant of a bit on the side. In Josephine Humphreys' excellent “Dreams of Sleep,” Alice is downright thankful when her dreary husband of 10 years takes up with someone else. There is Nicole and Dick Diver’s rather modern, look-the-other-way setup in parts of “Tender Is the Night.” And certainly, at the beginning, Marya has a terrific time with the Heidlers in Jean Rhys’ “Quartet.”

It was settled. Preemptive non-monogamy would obviously be better than the inevitable sneaking around. So, after the third time Ben said it was OK for me to see someone else, I did. I mean, I really saw him, the way Dean saw his French girl in “A Sport and a Pastime. ” The result was not shocking. It didn’t help my relationship with Ben at all.

“I didn’t mean him,” he cried after wrenching the identity of my other from me -- a cute, gregarious friend 10 years my junior. “How could you?”

Immediately, I stopped. I hadn’t really wanted to go out with anyone else anyway, because I was in love with Ben. But now, dear God, I was a potential (though, thankfully, childless) Medea. The ax was sure to fall sometime. I had sinned, and now it was his turn.

The thought made me sick. The truth was I would be completely crushed if he slept with someone else. How could I have been so stupid as to propose this plan? I became obsessed with the thought of him in bed with almost every woman I knew. Would it be the intern? Or that blond student? What about that bitchy editor with the hip spiky boots?

Certainly, opportunity loomed large. Ben is a successful novelist. When you are a woman and you share your work at a reading, you can probably expect a free drink, if you’re lucky. Male writers -- even mean, old ones -- invariably end up surrounded by willing women between the ages of 22 and 30 in innocently bookish yet tight sweaters. (I still have a few leftover in my closet.) How could anyone turn away from those shining faces, those adoring nods at dial-a-writer gems such as: There's no such thing as a happy ending! and When you stop writing, you die!

The stress was mounting. One evening, after patiently listening to my jealous wheedling, he left for a reading alone. I pitched “Anna Karenina” at the door, then passed the rest of the night with a bottle of Malbec and one of my very favorites: “Wide Sargasso Sea.” Ever read that one? The heroine gets so crazy over the loss of her husband’s love she sets herself on fire, along with Thornfield Hall, the home of the much less endearing Jane Eyre.

“Of course I could have,” he said to my tinny whines. “We always can. But why would I be out there when you’re in here?”

Reader, it was a night for the pages. I was in love, and I was loved back. I didn’t trust it, given the literature, but it was nice for a while, anyway.

And then, the big plot twist: I got pregnant. There was hysteria, there was hair pulling. It didn’t matter. The kid was real.

After a few weeks, the panic waned. We took stock of our feelings and, frankly, our ages. Over some wine in a hippie beach town, we decided to try the “happy family thing.”

(Though, going back to that canon of greats, there aren’t a whole lot of examples of those, either.)

You might not believe this, but the monogamy questions persisted. This time there were no good literary examples to follow. Adultery when there is a child involved is not only kooky, it’s inarguably selfish. OK, in some instances, when the offspring is well insulated by staff and governesses, it can work for a while. Pierre sort of gets away with it in “War and Peace” -- at least, that’s what a friend told me, as I’ve never finished the damned thing. Brenda Last, too, in “Handful of Dust,” until her son’s head gets kicked in by a horse. But in our servant-less existence, the prospect seemed to have real “Ice Storm” potential.

“Wait. Does this mean we can’t ever see other people again?” Ben asked, calling from one of his summer writing conferences when I was about 10 weeks along. “I never thought about that. Wow.”

My hormones were raging. I was also at a conference, staying in a sweltering dorm room in Tennessee. All around me, writers were making out, drunk, against trees while I struggled not to vomit from morning sickness. And he was saying what? From a distance, I now completely understand his frightened musings. But that night, a kindly university security guard soon arrived in response to my murderous screams.

When I was four months pregnant, we moved in together. After the initial frenzy of dog hair and rampant tirades of fear, we settled into a boring, pleasant chapter. We forwent parties to burrow under blankets with our books; we waved at each other over our laptops from different corners of the house. We seemed OK. Dare I say, happy.

However, given our history and the current environmental factors -- not to mention the novel arcs -- I knew it would be a miracle if something didn’t go wrong. A few weeks after we merged our belongings, Ben went as a visiting writer to Alaska and didn't call all weekend. I’ll never know what happened in the tundra of Fairbanks. Most likely nothing. Yet as I sullenly accepted his peace offering of the ugliest University of Alaska T-shirt I've ever seen, I had to point to the evidence on our sagging bookshelf.

And yet: As I got more pregnant, the other people -- dreamed up or real -- slowly faded. Perhaps the reason was obvious. I could now no longer cram my feet into any shoe under size 10, and seeing someone else while your girlfriend is swollen with child is right up there with seal-clubbing in terms of vile behavior.

(Though, again, examples can be found. “Doctor Zhivago, ” anyone?)

But I would like to give us more credit than that. The more Ben and I got to know and love each other, the less interested we were in outsiders. Also, there was another person emerging in our house. During those strange days we called her Creature, and she was already taking up much of our attention and time.

Advice seeker, please note: Under no circumstances, in life or literature, is “baby” a recommended answer to “commitment phobia.” We still had enough problems for a good Cheever story, at the very least. At nine months, I continued to lob the occasional email at that younger man, and Ben was still pretty hung up on that last one. Neither of us could use the word "family" without stuttering. As I cleared the scarier books out of corner of the apartment where the nursery was to be (Forster’s “Where Angels Fear to Tread” was relegated to the basement, as was Lorrie Moore’s “Birds of America”), I trembled at the thought of our future.

As if sensing our reluctance, the baby was three weeks late. On the way to the hospital for induction, the father of my child looked at me a bit blankly.

“Are people like us supposed to be doing this?”

In the next 18 hours, there was enough gore and horror to send the bravest male protagonist running. Ben held fast. Then Creature emerged, angry, beet-red, and indifferent to our screw-ups. She screeched like a gull and looked at us with expectation.

Be better than the books, she seemed to say.

A foolish dream, but we’re trying.

Katie Crouch's next novel, "Abroad," will be published next June by FSG/Sarah Crichton Books.