Romney rivals all become socialists, to horror of conservatives

GOP candidates trash capitalism, and good on them 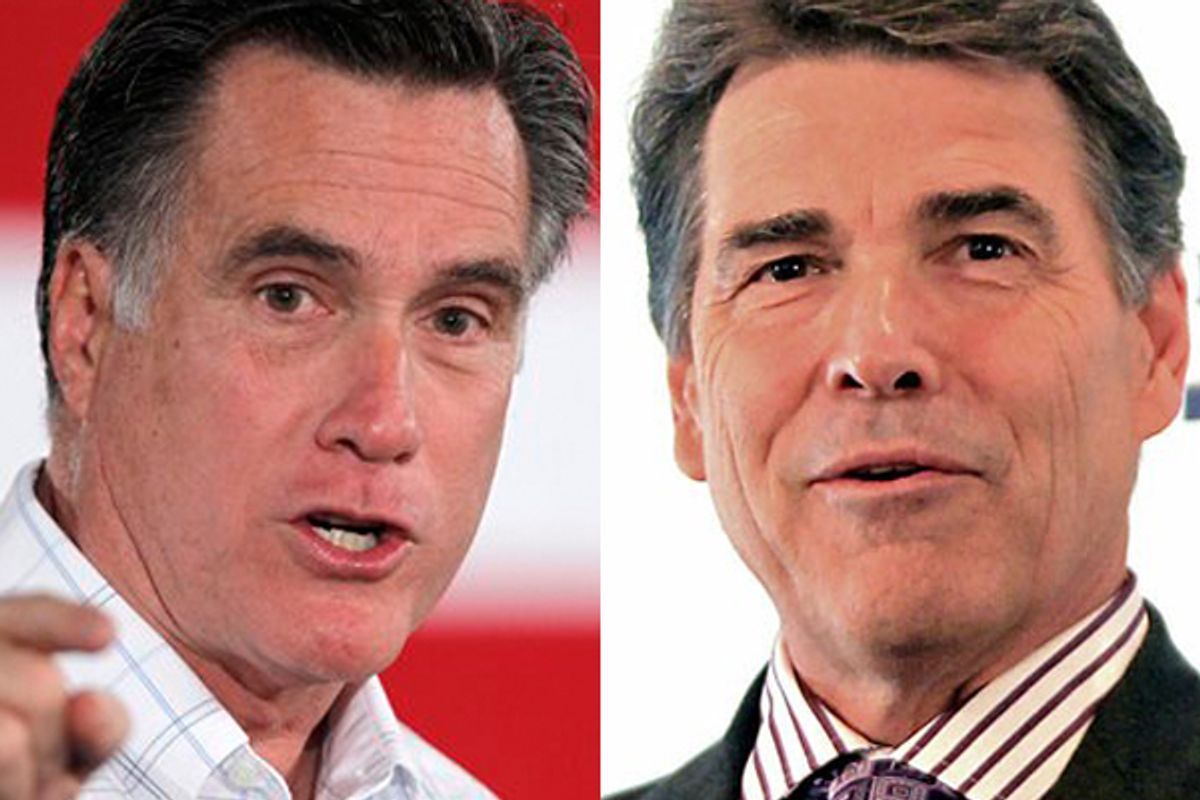 Mitt Romney accidentally said he likes firing people the other day, sort of. A fair reading of his statement, in context, is much less damning. He was talking about insurance companies, and he was saying he likes the idea that a consumer can "fire" someone providing them a service and choose someone else to provide that service, which is well and good.

(I happen to think the "fire people" gaffe did reveal something essential about Romney's character: Not that he's a heartless capitalist robber baron, but that the man is incapable of speaking off-the-cuff without saying something bizarre and tone-deaf. "I like being able to fire people who provide services to me" is just a really weird phrase, and an odd way of expressing a perfectly reasonable sentiment.)

Of course, his rivals for the Republican nomination wisely ignored the greater context and promptly turned "I like being able to fire people" into a ringtone. Which they are supposed to do, because they're running for president against this guy.

But Gingrich and Huntsman and Perry are seizing on this "gaffe" in the midst of a campaign against Romney that has grown increasingly (and to an outsider amusingly) class-based, to the horror and disgust of conservative elders.

Rick Perry, in particular, has basically become a communist:

“Now, I have no doubt Mitt Romney was worried about pink slips — whether he was going to have enough of them to hand out because his company, Bain Capital, of all the jobs that they killed,” Mr. Perry said. “I’m sure he was worried that he would run out of pink slips.”

He said that people in nearby Gaffney, S.C., in particular, “would find his comments incredible,” because it is where Mr. Perry said Bain shut down a plant and fired 150 workers.

“That didn’t happen until Mitt Romney’s private equity firm, they looted that company with more than $20 million in management fees.”

This is an attack on successful corporate restructuring! Perry added that "there is something inherently wrong when getting rich off failures and sticking it to someone else is how you do your business," which is basically a wholesale rejection of the free market system.

Sarah Palin is among those attempting to stanch the bleeding by blaming the bad old liberal media for attacking Romney for his success, but everyone can plainly see who's actually responsible.

National Review's Jim Geraghty complains that the candidates now all sound like Occupiers. The Club for Growth is pissed at Newt for his anti-Bain Capital attacks. Phil Klein accuses Romney's rivals of Marxist rhetoric. Avik Roy diagnoses Romney derangement syndrome. (The American Spectator literally calls for Gingrich to be investigated for violating campaign finance law for perhaps coordinating with a Super PAC. What happened to the absolute defense of campaign funding as speech?)

It looks like Republican opinion leaders are beginning to coalesce around Romney due in part to disgust over anti-capitalist attacks being levied against him. Of course, his rivals wouldn't be pushing this line if they didn't think it was effective. The irony is that the Republican candidates are shameless enough to embrace the exact arguments conservatives and centrists have successfully shamed liberals out of making.

One frustrating fact of life for a lot of progressives and left-wingers is that full-throated economic populism practically doesn't exist in the Democratic Party. What passes for "class warfare" nowadays is the the president apologetically suggesting that the top marginal tax rate eventually be restored to a level far below where it stood for the majority of the Reagan administration. (Or even simple defenses of the welfare state, in the case of that radical Elizabeth Warren.)

Republicans have continued to practice the "cultural" populism (or white populism or Southern populism) that has served them well since they absorbed the conservative Dixiecrat vote while Democrats have come to find class-based populism extremely distasteful and counterproductive, as neoliberalism took hold and the eastern Rockefeller Republican class became the effective center of power in the Democratic Party (which admittedly did counter the Reagan-era GOP's massive fundraising advantage). Ron Paul's newsletters and Newt Gingrich's "food stamp president" line and Rick Perry's massive prayer festival and every candidate's constant invocation of dastardly "elites" are all the "acceptable" kind of populism: the kind based on amorphous racial and tribal resentments and not economics. But the reason the GOP and rich centrists cry foul when the other kind of populism is hinted at is because it works, really well, because unmitigated capitalism is really destructive and awful for huge segments of the population.

But desperation and shameless vote-grubbing makes it all too tempting to bridge the gap between the two forms of populism, as horrified conservative observers can now see. The "deal" has always been that you offer red meat to the rubes and all's fair as long as once in power you devote your energies to ensuring that people like the Kochs can operate without scrutiny and perhaps with a bit of extra tax incentives. You're not supposed to go after the real elites, though -- just public school teachers and people who enjoy fresh greens.

I am all in favor of the GOP adopting economic populism, even if it's for their own evil ends, because it makes it marginally more likely that leftists will be allowed to try it out themselves again, some day.