"Chelsea" has a Chelsea Handler problem

Like her or loathe her, Chelsea Handler has a distinct personality. Too bad her new sitcom has none 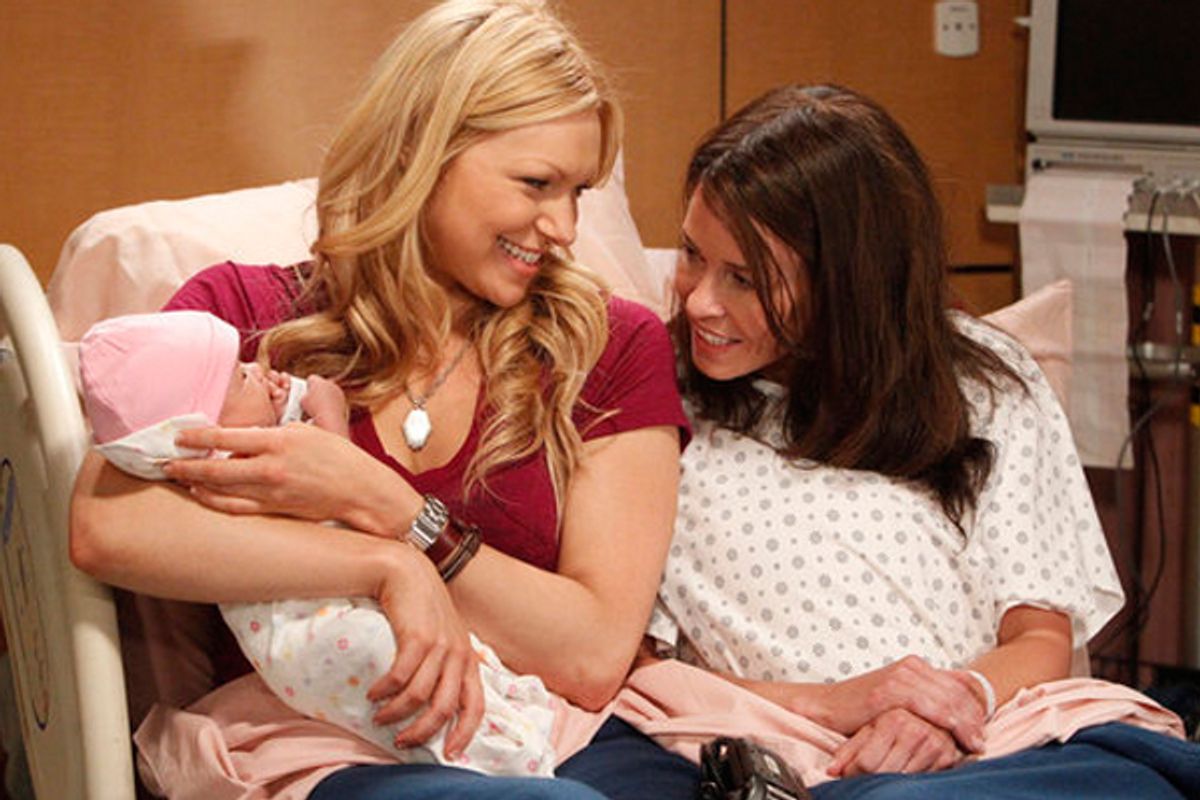 Laura Prepon and Chelsea Handler in "Are You There, Chelsea?"
--

"Are You There, Chelsea?," the title of Chelsea Handler’s new series premiering tonight (8:30 p.m., 7: 30 central) on NBC, is really a question best left in the writers’ room. If you have to ask, the answer is probably “no.”

Like her or not -- Handler's scorching, raunchy humor isn’t for everyone -- the comedian should be front and center. Why wouldn’t she be? Handler has become a household name, as the host of a 5-year-old late-night talk show, "Chelsea Lately," and as the author of four best-selling books. The sitcom, which was green-lit by Handler’s now-ex, Ted Harbert, the CEO of Comcast, is based on "Are You There, Vodka, It’s Me, Chelsea?," a collection of essays detailing her soused and saucy antics.

So, where is Chelsea, then? Roseanne starred in "Roseanne." Jerry starred in "Seinfeld." Louis C.K. stars in "Louie." Even her caustic pal Whitney Cummings -- who barely registered a blip outside of the comedy circuit until this past fall -- stars in her eponymous sitcom. Handler appears in only seven of the 13 episodes, cast -- by choice, she says -- as the conservative Christian sister to her fictional twentysomething alter ego. (Handler claims she was too busy with her talk show to be the sitcom’s star or head writer.) Instead, Laura Prepon (Donna Pinciotti from "That '70s Show") plays young Chelsea Newman, ventriloquizing Handlerisms like a white kid reciting a Chris Rock monologue (if only she were savoring the jokes as breathlessly. If only the jokes were so worthy) while Handler's presence in these early shows underline how flaccid her emasculating quips sound when intoned by anyone but her.

The pilot opens with Prepon’s voice-over, narrating as Chelsea Newman proudly “power-slurps the worm” out of a bottle of tequila to show up the guys at the sports bar where she waitresses. Cut to the county jail, where she spends the night with a bunch of lecherous lesbians from central casting — she’s gotten busted for a DUI. Just as one of the burliest broads starts in on her, she prays: “Are you there, vodka, it’s me, Chelsea.” The Lord Grain Alcohol answers her, apparently, because she’s bailed out by her hugely pregnant, judgmental sister, Sloane — Handler in a mousy brown wig, looking haggard, baiting Prepon with the line “Vodka is not the Lord.” That earns this meh quip: “Are you sure? They’re both invisible and have a hand in unexplained pregnancies.” Onto the sports bar, where we meet the rest of the crew: Chelsea’s best friend and gatekeeper, Olivia (Ali Wong), a petite Korean woman as shrill as a yipping Chihuahua; bartender and one-time-roll-in-the-sack Rick (Jake McDorman); bar back and resident little person (Handler would seem to have a fetish) Todd (Mark Povinelli). Don’t worry, they don’t make fun of his height — he’s color blind [insert sad-trumpet sound here]! Chelsea’s miserly, drunken father Melvin (Lenny Clarke) is, I suppose, Cliff-like in this "Cheers"-less bar, trolling for free drinks, except that Cliff would have been disturbed by his daughter offering her male friends “handies” in his presence.

All of these people are just set decoration for Chelsea’s posturing as a brazen, unapologetic bad-ass. She can drink not like a man, but “two men” — though we don’t witness her getting drunk so much as hear about it (they did take “vodka” out of the show title, after all) — and can trash-talk anyone under the table. Her sexploits in evidence are aborted missions  — in one, she wrestles to top a fellow-alpha sex partner; in another, she interrupts foreplay to attempt to trim the overgrown pubes of a red-headed conquest who repulses her. And, sure, she talks blue, but when more dynamic female characters go dirty, they do so with the searing wit of "30 Rock's" Liz Lemon, and the cursing conviction of "Dexter’s" Deb Morgan. When she and Olivia boast about popping “lady wood” as they admire the décor of a prospective apartment, owned by a gawky virgin named Dee Dee (Lauren Lapkus, who manages to bring in the only bit of funny in evidence), it’s not racy, or shocking, or even ewww-worthy. It’s writers trying too hard to lend an edge to aimless, underdeveloped characters. Which is why the only laughter you hear after all these clunkers comes from the accompanying laugh track. Just like "Whitney."

Whitney Cummings is at least fully devoted to being "Whitney," a caustic, often-unlikable woman with a supportive boyfriend and serious abandonment issues. I can even bear, in small doses, “adorkable” New Girl Jess (Zooey Deschanel), in all her sing-songy tweeness. She may not be grounded as an individual, but she is at least fully realized as a character. But Chelsea, that girl’s nowhere to be found. And unless the writers find a way to give us a sense of who she is, why seek her out?