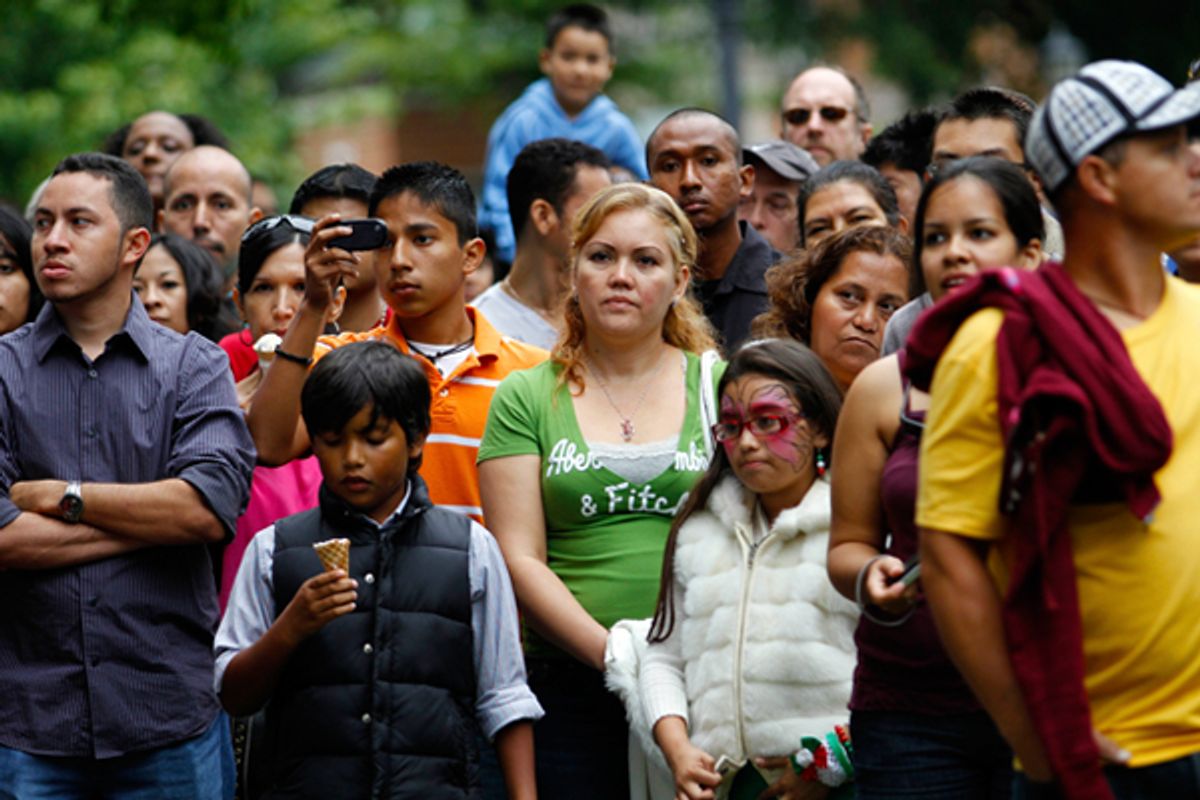 “We have to fix our problems with the Hispanics,” said John McCain last week when asked by MSNBC’s Chuck Todd about the Republican Party's competitiveness in the Southwest in the 2012 election.. “It starts with a way to address the issue of immigration in a humane and caring fashion, at the same time emphasizing the need to secure our borders because of the drug cartels and the people who transport people across our border and treat them terribly.”

A tip for McCain, front-runner Mitt Romney and other Republicans: drop the “the” in front of references to Hispanics. Use of the definite article sounds a bit too much like the cringe-worthy “that one” line McCain dropped on Barack Obama during their October 2008 presidential debate in Nashville, and smacks of the sort of “these/those people” phrases that only turn away the groups described. This week, Romney smartly released his first Spanish-language campaign ad, a positive sign. But language is only a small part of the GOP’s problems with minorities, and Latino voters in particular.

Democrats dominate among non-white groups, winning among African-Americans and Asian Americans as well as Latinos. In 2008 Obama carried 67 percent of the Latino vote, and even won the Cuban-American subset previously loyal to Republicans. For GOP presidential candidates, the party’s struggle to attract Latino voters is particularly troubling for two reasons. First, the Latino vote is significant and growing quickly, and will in the near future surpass African-Americans as the nation’s largest ethnic minority voting bloc. (Latinos already outnumber blacks as a share of the population.) Second, unlike in the South where white Republican performance rates can counterbalance African-Americans’ overwhelming support for Democrats, the Latino vote outside Florida and Texas tends to be concentrated in Southwestern states where the offsetting effects of white Republicans are often insufficient.

George W. Bush set the party’s standard for successful outreach and performance among Latinos. In 2004, exit polls indicated that a remarkable 44 percent of Latinos had voted for Bush. Minority voting experts believe this figure is inaccurately high, but there is general agreement that Bush came close if not breached the critical 40 percent national threshold. And there’s no doubt his Latino support in 2004 helped him win four key Southwestern states — Arizona, Colorado, Nevada and New Mexico — that either Bill Clinton or Al Gore had previously carried. By 2008, however, Obama swung all but McCain’s home state of Arizona back into the Democratic column, and did so rather comfortably, winning Colorado, Nevada and New Mexico by at least 9 percentage points.

What explains the Republicans’ swift reversal? Although other issues have contributed to the GOP’s struggles with Latino voters, the party’s strident opposition to immigration reform has poisoned the electoral well. From California’s Proposition 187 referendum in the 1990s to Arizona Gov. Jan Brewer's signing of the most anti-immigrant law in the country in 2010; from the antics of crusading Maricopa County Sheriff Joe Arpaio to the state-level attempts to secure borders to denying benefits to immigrants or their children, conservative groups and their Republican allies are leading the anti-immigrant charge.

“The GOP’s reputation among Latinos is as bad as it has ever been, driven primarily by statements and state legislation on immigration,” Gary Segura, a Stanford political scientist, co-investigator on the National Latino Survey, and president of Latino Decisions polling firm, told me. “Though President Obama’s early inaction on immigration reform and his record deportations significantly undercut his support within the community, there is not a single Republican presidential candidate willing or able to exploit that weakness; they are all too busy tacking to the right to please their base.”

Only 17 percent of Latinos say that the Republican Party is doing a “good job,” according to a Latino Decisions poll taken last month. Forty-six percent agreed that the GOP “doesn’t care too much” and another 27 percent described the party as “hostile” to Latino interests. With a combined 73 percent of Latinos expressing generally or strongly negative attitudes to the party, the Republican nominee is almost guaranteed to win a minority of Latino votes in 2012.

The GOP needn’t carry the Latino vote to win presidential elections, so what matters are the splits nationally and in key states. Segura estimates that if Romney or any other Republican nominee fails to get 40 percent to 42 percent of the Latino vote nationwide, Obama will likely hold Nevada, Colorado and New Mexico, and possibly win Arizona without McCain at the top of the ticket. “Absent a significantly refocusing event — and not even [Florida Sen. Marco] Rubio as the vice-presidential choice is likely to meet that standard — I cannot envision a way for Romney or any of his rivals to do better than Sen. McCain did four years ago among this rapidly growing segment of the electorate."

In fact, there’s a very real possibility that, despite Latino frustrations with the Obama administration, Romney may do worse this year than did his newfound ally McCain four years ago.

“The current dynamic among Latinos is mild disappointment with Obama but outright fear of the GOP,” wrote Simon Rosenberg, president of NDN, a center-left think tank known for its analysis of Latino politics, to me by email. “Obama’s numbers have held, and Romney’s are far below McCain’s from 2008. And given Romney’s firm embrace of the anti-immigrant wing of the GOP, it is very hard to see how he makes up lost ground in 2012.”

Purple Strategies political consulting firm partner Rob Collins disagrees. One of the co-creators of the Hispanic Leadership Network, Collins cites three reasons why Romney or whoever wins the GOP nomination has a strong chance to outperform McCain with Latino voters.

“First and most important, Obama’s weak polling transcends all ethnic distinctions,” Collins told me, echoing recent evidence that Obama’s support among Latinos is slipping, partly in response to the president’s record-setting deportation of illegal immigrants.

Second, says Collins, conservative groups like American Crossroads and the HLN, along with the Republican Party, have invested significant resources on outreach and messaging to the Latino community. Collins argues that Republican politicians and strategists, who he admits not long ago suffered from viewing the Latino vote monolithically — failing, for example, to distinguish among Mexican Americans, Cubans, Salvadorans, Dominicans, Puerto Ricans and other subgroups — now better understand the “nuances and differences” among these varied political sub-elements within the community.

Collins does not deny the GOP’s problems on immigration policy, but contends that there is a significant and growing gap between the “reality” and “ideology” of anti-immigration reform. Although most conservatives undoubtedly favor taking strong action to secure America’s borders, most are less fervent about rounding up and deporting every illegal immigrant.

This tension between strident rhetoric and reasonable action was evident in the mixed response to Newt Gingrich’s call for a reasonable deportation and amnesty policy — comments that drew praise from the likes of Miami Herald columnist Andres Oppenheimer, but scorn from Republican hard-liners like Michele Bachmann. Collins predicts that Harry Reid and Senate Democrats will make a major immigration reform push at some point this summer or fall, not in order to actually pass legislation but to demonize the Republican ticket and split the party in the months before the general election.

As Republicans try to simultaneously please both the xenophobic elements within the conservative base and the Latino voters it needs to compete nationally, they may be tempted to seek a quick-fix solution, notably the selection of a Latino vice-presidential running mate. Symbolic shortcuts to demographic parity don’t necessarily work, of course, and may create as many problems as they solve. (Think of all the female independents and disgruntled Hillary Clinton supporters driven immediately and irreversibly to Obama’s candidacy after McCain in 2008 picked Sarah Palin as his running mate.)

But the choice of a young, smart, talented, swing-state rising star like Rubio — subject of a Ken Auletta feature piece in this week’s New Yorker — may not be a panacea for the GOP. Indeed, selecting him may only bring the party’s internal conflicts into fuller, public view. “Rubio’s ability to reach into the non-Cuban Hispanic vote is unproven,” says Rosenberg. “He does not do well with non-Cubans in Florida, and he has taken stances — no on Comprehensive Immigration Reform, the Dream Act, the appointments of [Supreme Court justice] Sonya Sotomayor and [Ambassador] Mari Carmen Aponte, and yes on English-only language — which in some ways put him to the right of Romney and arguably against the interests of those who must migrate to the United States in a traditional path, something Cubans do not have to do.”

John McCain is right: The GOP has a problem with “the” Hispanics. In general elections and especially during primaries, Republican candidates increasingly depend upon support and money from older, whiter voters who hold more reactionary views than younger Americans do toward minorities and immigrants. The intraparty conflicts that result could diminish over time, as the party replaces older voters with younger ones, and attitudes toward minorities soften, but only if the GOP doesn’t box itself into an electoral corner from which it cannot escape.