Resolved: Kick the Amazon habit in 2012

Yes, you CAN buy e-books and support your local indie bookstore 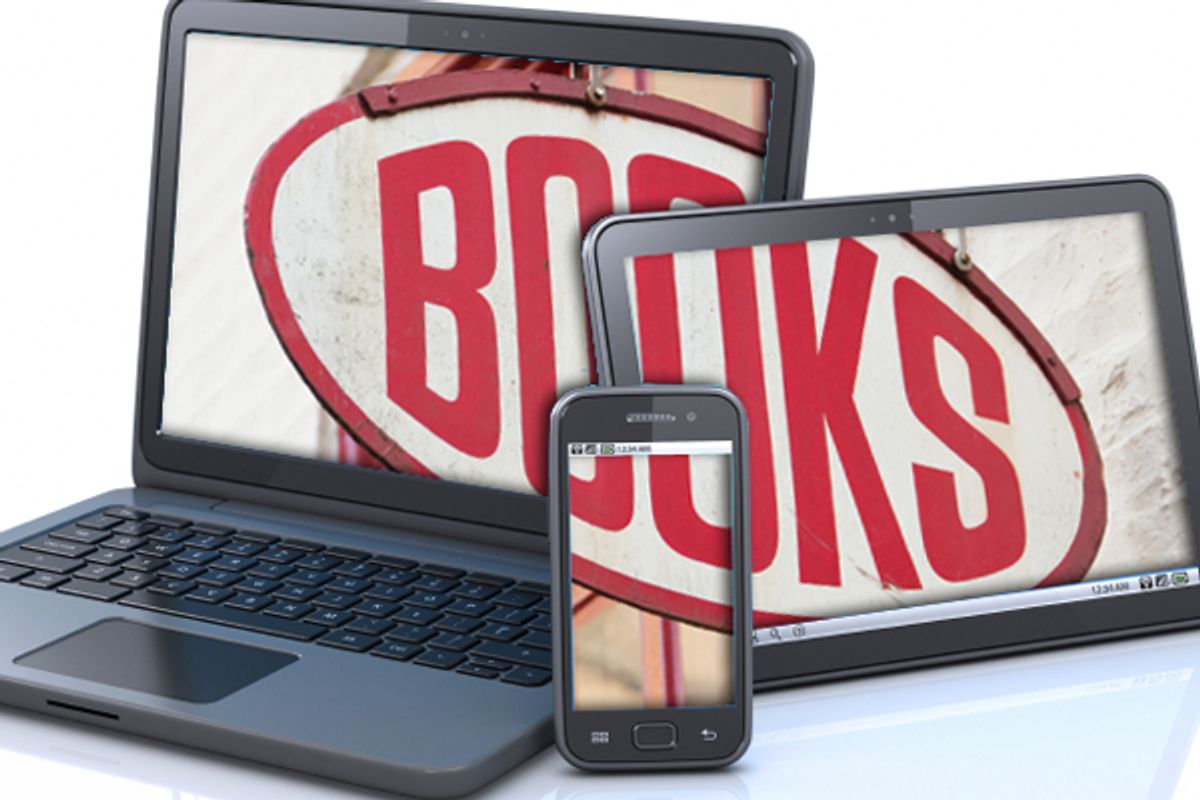 I suspect I'm not the only person starting 2012 with a resolution to buy fewer books from Amazon. Resistance to the e-commerce giant and its crypto-monopolistic ways crystallized just before Christmas, when it offered customers a 5 percent credit to use its price-checking app in brick-and-mortar stores, thereby undercutting local businesses.

Booksellers have been complaining about "showrooming" -- the practice of using a bookstore to browse and learn about new titles while buying the actual books online -- for a while now. Amazon's holiday-season gambit, and a New York Times op-ed denouncing it written by novelist Richard Russo, alerted readers who value their local bookstores to the possibility that those stores will vanish if we don't make a point of patronizing them.

But what if you prefer e-books? Because of my job, I rarely buy print books. (I get too many sent to me as it is.) Yet, for various reasons, I've found myself purchasing a surprising number of e-books to read on my iPad. At first, I automatically opted for Kindle books; the Kindle app for the iPad works great, and if I decide to switch to reading on my iPhone, it will automatically keep my place. Above all, Amazon has the richest and deepest online books database, where I can instantly find out whether a title is available in e-book (or audiobook) format, scan reader reviews and follow reader-generated tags to find similar titles.

Many people assume that if you want e-books, you've got to buy them from Amazon or another online retailer. They're wrong about that. You most certainly can purchase e-books from your local independent bookstore. I've done it myself several times since I made my resolution to avoid buying them from Amazon if at all possible. Two of my favorite New York booksellers -- Greenlight Books in Brooklyn and McNally Jackson in Manhattan -- participate in the Google e-books program. You can visit their websites, find the book you want and purchase it through Google, which gives the bookstore a cut. The prices are comparable and the Google Books app works as well as the Kindle one.

That doesn't mean that I don't still use Amazon to find out about e-books. From browsing in the Kindle store, I learned that Cornelia Read's "Field of Darkness" -- a 2006 mystery recommended by one of my favorite authors, Tana French -- is now available as a Kindle e-book for a mere $1.99. So I popped over to McNally Jackson's website, searched on that title and found that the Google e-book could be had for the same low price, whereupon I bought it there. (Admittedly, McNally Jackson's cut on a $2 book can't be much, but I've bought full-price e-books from them as well. This is just the most recent one I learned about first from Amazon.)

I call this practice "reverse showrooming," and recommend it to e-book aficionados who want to break their Amazon habit. Unfortunately, not all indie booksellers participate in the Google e-books program, and those who do aren't always adept at highlighting the option. The small publisher Melville House Press is trying to boost the program among booksellers by distributing free, customized "shelf talkers" for the MHP titles carried by individual bookstores. (Shelf talkers are those paper notices attached to book displays recommending particular title, usually as a staff pick.)

Melville House's shelf talkers include a QR code -- one of those enigmatic squares of black and white dots -- that, when scanned by a shopper's smartphone, will take her immediately to the bookseller's website and an order page for the book. Instead of seeing the book in the store and having to look it up on Amazon in order to buy the e-book, the code makes it even easier to buy the e-book directly from the bookstore itself.

Dennis Johnson, Melville House's founder, says that so far only a few forward-thinking booksellers have taken the press up on its offer. Times are tough for brick and mortar stores and he says many of them view e-book sales as "not their core business." Google's eBookstore got off to a slow start after launching a year ago and there have been bottlenecks when it comes to adding new books to the system, especially for smaller publishers like Melville House. Yet booksellers and publishers have nothing to lose by making this un-Amazon, pro-indie option more visible.

Not surprisingly, you can't read Google e-books on your Kindle (except for the KindleFire), which is one reason why the most popular e-reader on the market isn't necessarily the best. You can read Google e-books on smartphones, tablets like the iPad, the Nook, the Sony Reader and a variety of lesser-known e-readers, some with e-ink, others backlit. There are also rumors of a forthcoming Google e-reader and -- after a recent survey showed that consumers are interested in an indie-branded e-reader -- the head of the American Booksellers' Association said they are "aggressively in the process of trying to develop a device that our members can sell as well."

But if you're one of the millions of Americans who owns an iPad or its Android equivalent, there's no need to wait. You can make the switch from Amazon to indie e-books right now, and do your part in the coming year to keep your town or city a more bookish place.