The rise of the zombie candidate

Super PACs have made it possible for no-shot hopefuls like Gingrich, Perry and Santorum to run indefinitely 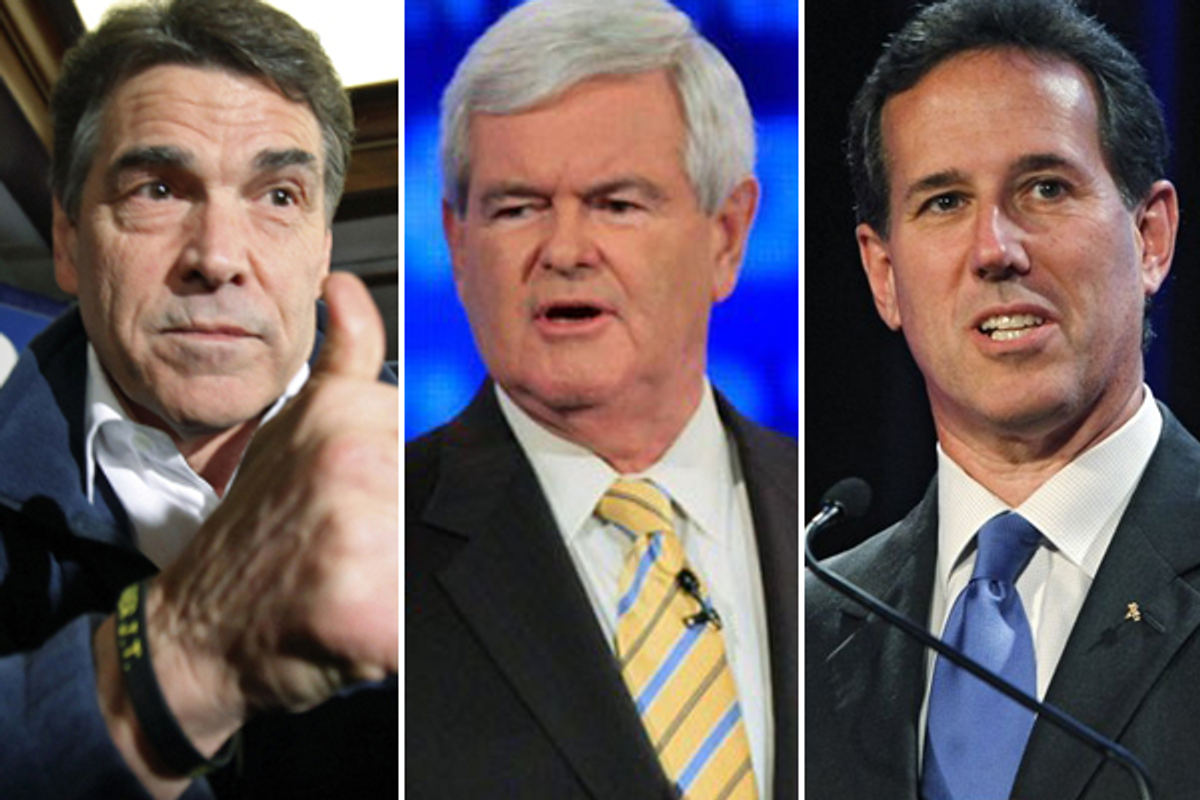 Robert Farmer, a legendary Democratic fundraiser of the 1980s and 1990s, once described how presidential campaigns ended: “People don’t lose campaigns. They run out of money and can’t get their planes in the air. That’s the reality.” Most candidates would run out of money long before they ran out of potential votes or plausible paths to victory. The winner of the nomination would often be the candidate with enough financial reserves to keep going when the others couldn’t afford jet fuel, and Farmer’s skill was in making sure that his candidates -- Michael Dukakis in 1988 and Bill Clinton in 1992 -- had that advantage.

That was the reality in 1992, but it’s not the reality today, especially on the Republican side. On the day after the New Hampshire primary, we now have a phenomenon in which a number of candidates who really have no possibility of winning their party’s nomination will keep going only because they can -- because the money is there, either in their own campaign accounts or in a Super PAC committed to supporting the campaign, such as the pro-Newt Gingrich group into which casino billionaire Sheldon Adelson recently dumped $5 million.

So whereas in the 1990s we had candidates who died prematurely -- they ran out of money while they still had a chance -- we now have, in effect, zombie candidates. They’re alive and can spend money and attack Mitt Romney even though their actual political lives are over. Rick Perry is not going to be the Republican nominee for president. (He joins a short list of well-financed Texans, including John Connally in 1980 and Phil Gramm in 2000, who spent many millions of dollars to win one or fewer delegates to the Republican convention.) Newt Gingrich is not going to be the Republican nominee. Jon Huntsman, Ron Paul, Buddy Roemer, Rick Santorum -- same deal. But they’ve got money and nothing to lose, and it seems they’ve all developed a personal distaste for Romney, so they will throw everything they’ve got at the nominee -- including attacks on his “vulture capitalism” at Bain Capital -- without regard to the consequences.

In the old system, money really mattered. It made or broke campaigns. Mostly it broke them. But it was the lack of money that really shaped the system. It was an invisible primary in which many candidates were excluded either before it started or soon into it. In the mid-1990s, Gingrich declared in a congressional hearing, “There’s not enough money in politics,” comparing political spending to the much larger marketing budgets for cereal and toilet paper. It was a declaration as shocking to the right-thinking reformers as the Sex Pistols’ version of “God Save the Queen,” but Gingrich was right at the time. The perennial gripe about “too much money in politics,” or its promise to “get money out of politics,” didn’t reflect reality — lack of money shaped politics as much as money itself. This was an era when losing presidential campaigns ran out of juice on $10 million or so, and candidates failed to mount a competitive race for Congress because they couldn’t raise $1 million.

But now the cliché of the past -- that there’s too much money in politics -- has become a reality. That’s probably going to be true on the Democratic side as well, definitely in the presidential race but probably also in many congressional contests. In a way, money matters less -- more candidates will meet the threshold to be competitive. But it’s also moved to a scale where everything changes. Money becomes an end in itself. It shapes the behavior of campaign consultants, who can now become very, very rich. It’s increasingly disconnected from candidates themselves or the incentives that might make sense for them. And it reaches beyond the campaign itself -- Gingrich is just one example of a candidate who is essentially in the race for money. His renewed prominence will generate speakers’ fees, and book and video sales, that will continue to fuel his lifestyle. Politics no longer comes at a cost; it’s a fundraising opportunity.

The post-Citizens United world of campaign finance obviously calls for some rethinking of solutions. My own reform preferences, which center on public financing, are best suited for a world in which lack of money matters as much as overwhelming money. And that’s still important. But we also need to confront the challenges of a world in which “too much money in politics” is not just a stale cliché, but the reality. A bunch of zombie candidates attacking Mitt Romney with money to burn might be welcome for Democrats, who can use their research and language in the fall, but it’s no more the ideal democratic process than was the old one, when candidates had to quit because they ran out of money, not votes. We need a campaign finance system that both limits the excesses and gives real candidates a means to be heard.