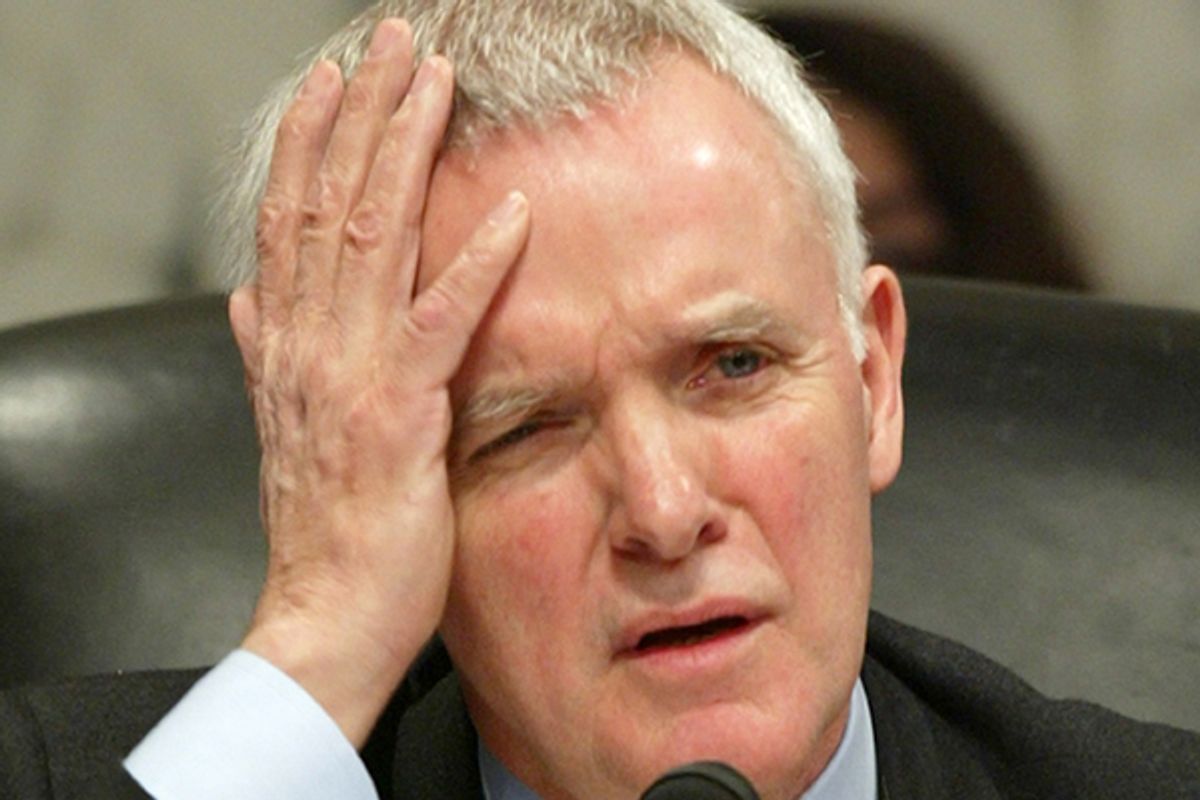 Given the tenuousness of Democratic control of the U.S. Senate, I imagine more than a few people in Washington are hoping former Sen. Bob Kerrey will run for the seat vacated by retiring Democratic Sen. Ben Nelson. As both local and national sources are reporting, Kerrey is seriously exploring the bid – and Republicans are taking his possible entrance just as seriously. Operatives of both parties seem to agree that he may be the only Democrat who could hold the seat. I hope that he makes the race. But I don't think he will.

First, some politicos call Kerrey a serial floater. They refer to his frequent Hamlet routine, in which he contemplates but ultimately declines to run for various offices: in 2000 for president, in 2005 for New York City mayor, and in 2008 for the last open U.S. Senate seat in Nebraska.

Second, after a decade in the private sector, I doubt Kerrey is excited by the prospect of a year of retail campaigning. He was famously aloof in his 1992 presidential campaign, which reinforced the regrettable nickname “Cosmic Bob.” As a former aide to ex-presidential candidate Sen. Bill Bradley, D-N.J., I traveled with Kerrey briefly in western Iowa in late 1999 as he helped campaign for Bradley before the caucuses. During a break between events, an advance man suggested that Kerrey shake hands in a small-town square; Kerrey suggested bowling instead. While I appreciated his quirky charisma, obvious intelligence, and willingness to speak hard truths, I found him miscast for the practice of politics. Accounts of his time in the Senate suggest a similar distaste for schmoozing.

Third, he could lose. Nebraska has reddened quite a bit since his last race in 1994. Back then, Nebraska had a Democratic governor and two Democratic U.S. senators; now, Nelson is the last elected Democratic statewide officeholder (and likely would've lost in '12, which was why he bowed out). And surely, his having spent his last decade heading one of the nation’s most liberal universities -- located in the lefty bastion of Greenwich Village -- would take a little explaining to culturally conservative Nebraska voters. Attempting a comeback in such a risky race, after an unblemished career record of wins, may seem unappealing.

Fourth, Kerrey might be haunted by the results of his last election. That election was a non-binding no-confidence vote brought by the faculty of the New School, where he served as president from 2001 to 2010. The overall vote was reportedly 271 to 3 against Kerrey, with the vote among senior faculty 74-2 against, and Kerrey announced his resignation soon thereafter. This occurred after Kerrey went through five provosts in seven years before naming himself provost in addition to president, which helped trigger student occupations of the administration building (back before the word “occupy” was capitalized). To say that Kerrey’s New School tenure was rocky would be like saying that Nixon had a bumpy presidency.

Even Kerrey’s New School detractors concede that he spearheaded some impressive achievements during his tenure on a number of fronts, substantially growing the endowment and streamlining operations. But he apparently had no constituency beyond the trustees and a few senior administrators; notably, the university quickly hired a new president with unsurpassed interpersonal skills whose early efforts at university-wide outreach have been widely hailed. New School veterans say that Kerrey could've benefited from even a small effort at retail politics within the university. That he did not attempt one further suggests a pattern of unease with the quotidian mechanics of politicking that could hinder Kerrey’s interest in returning to elective politics – especially in such a challenging climate for Democrats as Nebraska.

The last reason for my skepticism that Kerrey will run is simple: Would you want to spend a year in Nebraska -- not to mention weekends for the next six years -- after a decade in the Village? If he does, though, voters should choose him, if only for his deep commitment to his home state.

Jeff Smith is Assistant Professor of Politics and Advocacy at the New School in New York City, and a former Missouri state senator.