Here's the former speaker's indictment of Bain Capital that is now on the air in South Carolina. 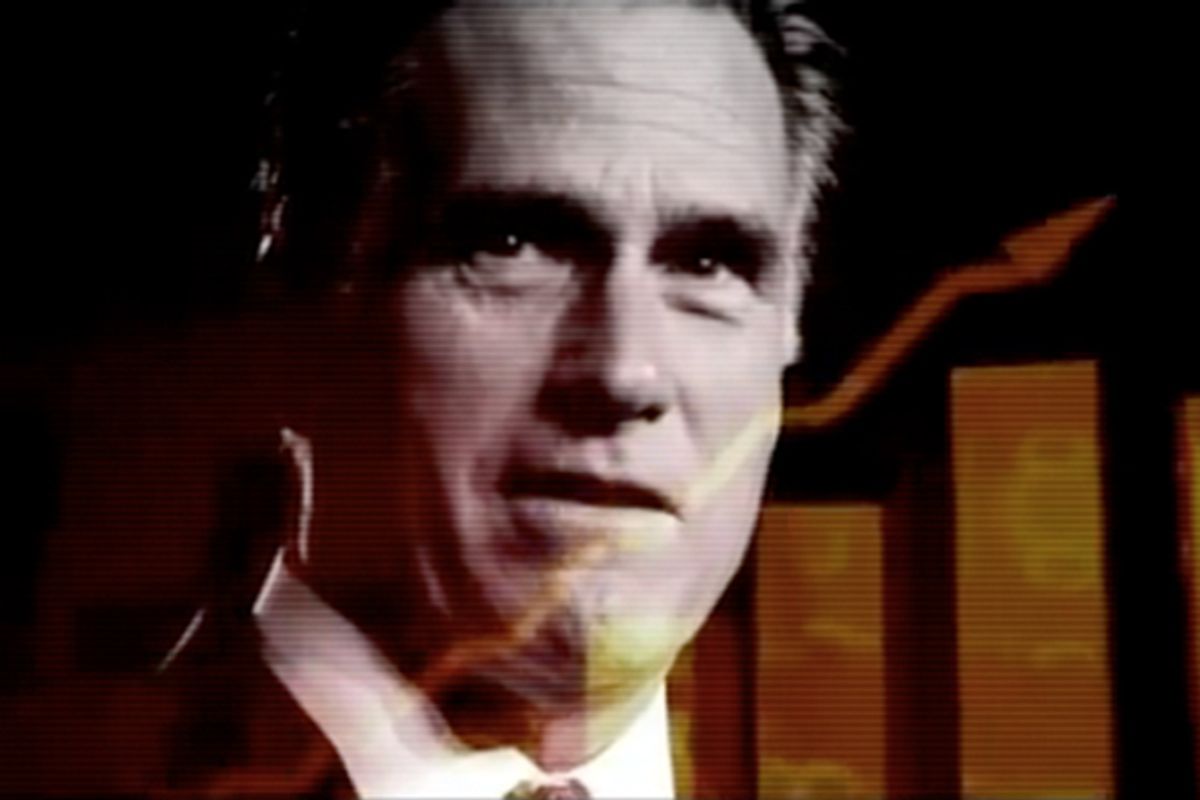 The man from Bain (politicsanonymous.com)
--

“Wall Street’s corporate raiders made billions of dollars . . . their greed was only matched by their willingness to do anything to make millions in profits.  Nothing spared, nothing mattered but greed.  This film is about one such raider and his firm.  Mitt Romney became CEO of Bain Capital the day the company was formed.  His mission:  To reap massive rewards for himself and his investors.”

The film highlights four of Romney’s “many targets, four businesses, and the people who worked there.

“A group of corporate raiders led by Mitt Romney, more ruthless than Wall Street . . . for tens of thousands of Americans, the suffering began when Mitt Romney came to town.”

UniMac:  “The company was Bain Capital, its CEO and President . . . Mitt Romney.  He had a Harvard pedigree and he was on a tear . . . stripping American businesses of assets . . . and often killing jobs for big financial rewards  . . . One stop on Mitt Romney’s quest:  Marianna, Florida.  For more than 50 years the UniMac Corporation had steadily built an American work force . . . back at his Massachusetts headquarters Romney had found his target.  Bain took control of UniMac.  One of the first things they did, according to workers, was to start 'cheapening the product.'  Workers run out of parts, and sometimes they would send a machine out without a part on it.  One of the very first orders of business for Romney’s Bain team:  Slash paychecks while keeping the workers in the dark.  Romney and Bain up-ended the company and gutted the work force. Now they were ready to make a handsome profit.  Romney and Bain’s sale to the Canadians netted a whopping 230% profit for Romney and his investors.  The deal left behind a trail of wreckage.”

KB Toys Inc.:  “Romney and Bain’s cash rampage would ultimately slash jobs in nearly every state in the country, like popular childrens’ toy seller, KB Toys.  Romney and Bain bought the 80-year-old company in 2000, loaded KB Toys with millions in debt, then used the money to re-purchase Bain’s stock.  The debt was too staggering.  By 2004, 365 stores had closed.  Romney called it ‘creative destruction.’  Romney and other top executives’ take: $120 million dollars.  By 2009 the debt accumulated under Romney was too great. KB Toys was no more.  Mitt Romney and Bain saw a 900% return on their investment.  Romney and Bain’s profits at the expense of 15,000 jobs was described by the Boston Herald as ‘disgusting.’  Under Romney, Bain was making billions, at the same time contributing to the greatest American job loss since World War II.  It was called the ‘Bain Way’,  Romney’s Bain Capital almost always managing to turn the misfortunes of others into their own enormous financial gains.”

DDI:  “A striking example of this was a technology company Bain financed with facilities in Texas, Colorado and California.  The company was called DDI.  With help from friends at Wall Street’s Lehman Brothers, Bain was set to offer an initial public offering of stock in DDI.  Lehman Brothers would issue a buy rating and Romney and Bain would watch investors swarm.  A signature of Romney’s 'Bain Way'  strategy, employees were quickly fired in order to pump up profits.  Helped by a favorable rating from Bain’s Wall Street friends, DDI’s 12 million share IPO raised a quick $170 million.  People were buying into the promise that DDI was headed to become a billion-dollar company.

"Then, instead of sticking with the stock, Bain dumped it.  Just after six months, Bain sold shares making $39 million.  Then they dumped the rest four months later, collecting $54 million more.  All the while, the Wall Street banks they hired gave cover, issuing glowing reports.  DDI ended up losing $400 million dollars, a little over two years later, the stock was nearly worthless.  The result:  DDI filed for bankruptcy.  2,100 jobs were lost.  Average investors without insider connections were left with huge losses.

"Romney denies being involved in the controversial deal, claiming to have left Bain to lead the 2002 Olympic Organizing Committee.  But SEC filings prove otherwise.  During the DDI deal Romney is listed as a member of the Managing Committee of Bain Capital, with control of over 1.3 million shares of DDI Corporation.  Sure enough, the probe uncovered evidence that Lehman Brothers continued to encourage investors to buy DDI stock, even though they had misgivings themselves.  Romney’s "Bain Way" model played out over and over. Employees, creditors and investors were hurt.  But not Bain.  Even though time and time again thousands of jobs were lost, investors and creditors were out hundreds of millions, Romney and Bain made piles of money.”

Ampad:  "The vicious cycle would play itself out this time in America’s heartland.  In 1992, an interesting prospect appeared on the Romney-Bain radar, a paper company called Ampad with plants in Holyoke, Massachusetts, Buffalo, New York, and Marion, Indiana.  The potential was there for Romney and his investors to reap a bonanza of cash – perhaps over $100 million dollars.  Romney’s hatchet men moved in, firing some, re-hiring others, slashing paychecks.  While keeping a smaller workforce, Romney and Bain began executing a scheme the New York Times called 'getting back your bait,' extracting hundreds of millions for himself and Bain investors by running up extraordinary debt.

In six months, over 200 of the employees Romney and Bain had re-hired were all fired.  Lula Gibson and her husband James were one such couple [who worked together at the plant.]  They had a son in high school.  For Shannon Conliff, the emotional toll was hard on a new mother.  For Romney, it was a score.  Romney and Bain went on to make over $100 million from Ampad.  To Romney and Bain Capital, it was just another deal.  To others, it was a pit of despair.  Romney had made himself rich beyond imagination.  He went on to purchase a $3 million home in New Hampshire with a private beach, and a $12 million beachfront property in California.  Even that wasn’t enough.  Mitt Romney is now personally worth somewhere over a quarter of a billion dollars.  Mitt Romney’s company, founded with some wealthy Latin American investors, is worth $65 billion today.”

“For some of the thousands of American workers he left in the dust, the nightmare never stopped.  Now Romney says he wants to bring what he learned on Wall Street to the White House.  What would his cabinet look like?  Who would he put in positions of power around him?  Bain reaped millions from companies that sent jobs overseas, closed factories, or plunged into bankruptcy.”

Romney:  ”Make a profit, that’s the name of the game, right?”