For years, he boasted that his mother, a onetime Senate hopeful, had been pro-choice. The truth is more complicated 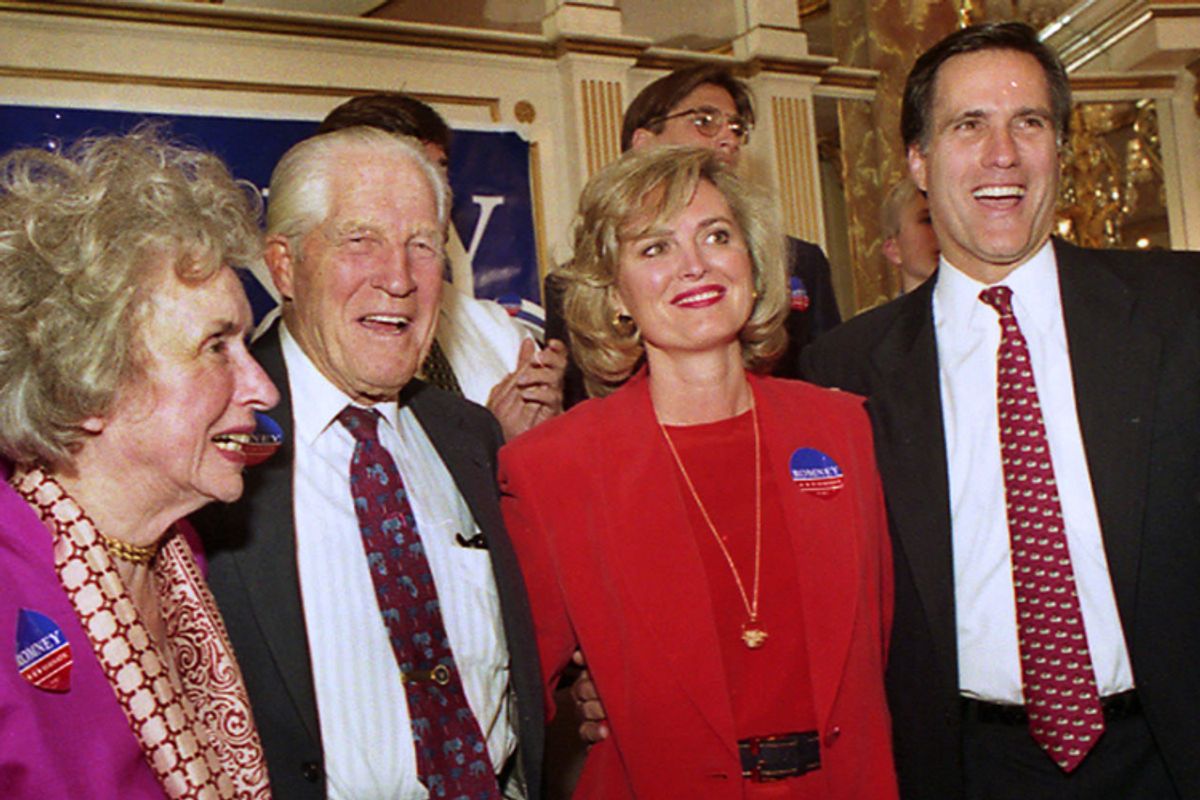 In this Feb. 2, 1994 file photo, Mitt Romney acknowledges the crowd after announcing his candidacy for the Senate. With Romney on stage are, from left to right, his mother Lenore Romney, his father George Romney, former governor of Michigan and one-time presidential candidate, and wife Ann. (AP)
--

The new biography "The Real Romney" provides evidence that Mitt Romney has repeatedly mischaracterized his mother's position on abortion rights. A previously unreported Lenore Romney quote in the book sheds light on Mitt Romney's convoluted and changing position on the issue, as well as his family's.

Both Steve Kornacki and I have delved deep into the Romney's evolution on the issue, including the story of a young relative of Romney who died during an illegal abortion, which Romney once cited as a reason for his being pro-choice. His flip-flop on abortion rights continues to be a political problem, with Newt Gingrich currently running ads attacking Romney for having been a "pro-abortion" governor of Massachusetts.

Before we get to the previously unreported quote from Romney's mother, here's the context. Back when Romney was running for Senate as a pro-choice challenger to Ted Kennedy in 1994, he invoked his mother's position on the issue in a debate.

"I believe that abortion should be safe and legal in this country; I have since the time that my mom took that position when she ran in 1970 as a U.S. Senate candidate," Romney said, adding:

"I have my own beliefs, and those beliefs are very dear to me. One of them is that I do not impose my beliefs on other people. Many, many years ago, I had a dear, close family relative that was very close to me who passed away from an illegal abortion. It is since that time that my mother and my family have been committed to the belief that we can believe as we want, but we will not force our beliefs on others on that matter. And you will not see me wavering on that."  (Emphasis added.)

Romney again invoked his mother's "bold and courageous" position in a 2002 Massachusetts gubernatorial debate in which he said he was strongly in favor of preserving a woman's right to choose.

"My position has been the same throughout my political career, and it goes back to the days of 1970," he said. "There was a woman who was running for political office, U.S. Senate. She took a very bold and courageous stand in 1970, and that was in a conservative state. That was that a woman should have the right to make her own choice as to whether or not to have an abortion. Her name was Lenore Romney, she was my mom. Even though she lost, she established a record of courage in that regard."

Romney's claims about his mother later came under scrutiny when a Boston Globe columnist in 2005 interviewed people who were in the orbit of Lenore Romney's 1970 Michigan Senate bid who had no memory of her being pro-choice. In response, Mitt Romney's office dug up a campaign document from his mother's campaign which stated:

"I support and recognize the need for more liberal abortion rights while reaffirming the legal and medical measures needed to protect the unborn and pregnant woman [sic]."

This was a few years before Roe v. Wade was decided, so that may well have been a progressive stance for the time. But, with its reference to protecting "the unborn," it hardly seemed like a clear statement of support for legal abortion.

This is where the previously unreported Lenore Romney quote comes in. "The Real Romney" authors Michael Kranish and Scott Helman found a May 1970 story from a Owosso, Michigan, newspaper in which Lenore Romney says of the abortion issue:

"I think we need to reevaluate this, but do not feel it is simple as having an appendectomy. … I'm so tired of hearing the argument that a woman should have the final word on what happens to her own body. This is a life."

If anything that statement -- with its emphasis on women not having the final word -- would most accurately be characterized as anti-choice. The irony is that Mitt Romney is now arguably closer to his mother's actual 1970 position than he was when he ran as a pro-choice Senate candidate in 1994.