Talking to the Muslim Brotherhood (finally) 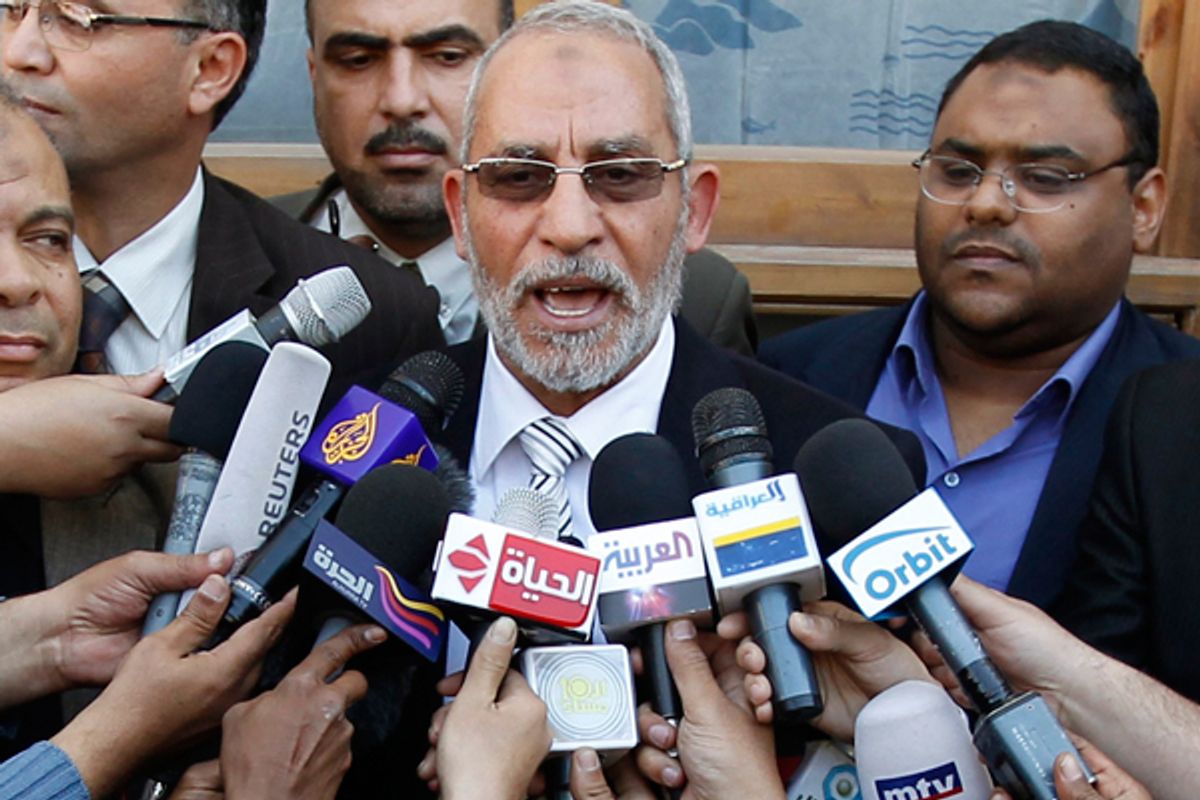 Last week, the New York Times reported that the Obama administration had decided to significantly increase contacts with Egypt’s Muslim Brotherhood, in the wake of the group’s significant showing in recent elections. According to the Times, the new contacts represented “a historic shift in a foreign policy held by successive American administrations that steadfastly supported the autocratic government of President Hosni Mubarak in part out of concern for the Brotherhood’s Islamist ideology and historic ties to militants.”

“Now, the Americans come to meet us in person because they have estimated that we will be coming to power,” Mohamed Saad Katatny , the secretary-general of the Brotherhood-affiliated Freedom and Justice Party, told the Washington Post, “and therefore they want to know us, but we have not discussed more than the general conditions and made introductions.”

On Wednesday Deputy Secretary of State William Burns met with the head of the Brotherhood’s political party, the highest-level contacts ever.

The Obama administration’s first tentative steps toward the Muslim Brotherhood go back to the president's Cairo speech in June 2009, which was attended – at the administration’s request – by Muslim Brotherhood-affiliated activists. “America respects the right of all peaceful and law-abiding voices to be heard around the world, even if we disagree with them,” the president told those assembled at Cairo University. “And we will welcome all elected, peaceful governments — provided they govern with respect for all their people.”

Laying down a condition for democratic participation, President Obama continued in Cairo, “government of the people and by the people sets a single standard for all who hold power: you must maintain your power through consent, not coercion; you must respect the rights of minorities, and participate with a spirit of tolerance and compromise; you must place the interests of your people and the legitimate workings of the political process above your party.”

The shift has been some time coming. For decades, U.S. policymakers struggled to develop a coherent approach to Islamic political parties in the Middle East, of which the Muslim Brotherhood is the oldest. Founded in 1928 by schoolteacher Hassan al-Banna as a populist social movement aimed at returning Egyptian society to its Islamic roots, the group originally supported the Egyptian revolution of 1952, but soon fell out with the new government of Gamal Abdel Nasser. An attempt on Nasser’s life in 1954 led to the organization being outlawed and to a prolonged period of repression, some splinter factions turning to violence.

After Brotherhood-affiliated candidates won 88 seats in the national assembly in Egypt’s 2005 parliamentary elections, the Bush administration began talking to them, but pulled back as Mubarak launched a renewed crackdown on democracy activists. Bush’s “freedom agenda” was buried under a wave of anti-American radicalism driven by the occupation of Iraq.

Obama's election on a pledge to change direction and his Cairo speech put him in a decent position to side last year with the Tahrir Square protesters’ demand for political reform and the end of Mubarak’s regime, something for which Obama has continued to be criticized by Republicans who see little difference between the religiously oriented politics of the Brotherhood and the violent nihilism of al-Qaida. Faulting the administration for not supporting Mubarak, presidential candidate Rick Santorum called the Muslim Brotherhood “as dangerous to western civilization and the future of our country” as al-Qaida.

Back in July, as it became even clearer that Islamist parties were preparing to make significant gains in the coming elections, it was reported that the Obama administration was seeking “limited contacts” with Brotherhood activists. Conservatives once again criticized the shift, but it’s unclear what the other options are, aside from doubling down support for Egypt’s current interim government, headed by the Supreme Council of the Armed Forces, which has become increasingly violent against protesters over the last months. (That is, repeat the same mistakes that we have made for decades in supporting oppressive authoritarian regimes against their own people for the sake of stability.)

“I think the [New York Times] story was a little overstated,” said Steven Cook, a Middle East Scholar at the Council on Foreign Relations, whose book “The Struggle for Egypt” was published in September. “For years we’ve been having unofficial contacts with the Muslim Brotherhood. And pretty early on after Mubarak fell, the State Department indicated that there would be contacts.”

The bottom line, according to Cook, is that the Brotherhood is “an important part of the political landscape and choosing to wall ourselves off from them is unnecessarily handicapping ourselves. They haven’t engaged in any violence for the better part of five decades. So it’s reasonable to be talking to them. There doesn’t seem to be any downside, unless you buy into this idea that the Brotherhood is part of the effort to establish the global caliphate, which is not the case.”

Some analysts take a darker view. “It is tempting to believe that the FJP will moderate once in power,” writes Eric Trager of the Washington Institute for Near East Policy, but a number of factors make this highly unlikely, including the challenge to the Brotherhood’s right flank from more extreme Salafi parties. Trager also argues that Egypt’s peace agreement with Israel is in danger. “Although the party has said that it will honor Egypt's international agreements,” Trager writes, “it has carved out an exception for the Camp David Accords, which it intends to put to a national referendum, thereby shielding itself from direct responsibility for the treaty's demise.”

But Olivier Roy, a French scholar who has covered trends in political Islam for some time, asserts that the parties like the Muslim Brotherhood and Tunisia’s Ennahda, which won recent elections there, should be considered “post-Islamist." While they continue to espouse many ideas at odds with modern liberalism (just as do some Western conservative religious political movements), in Roy's analysis they have  adopted in principle the necessity of working within a pluralistic political space.

“The paradox of Islamization is that it has largely depoliticized Islam,” Roy wrote. “Social and cultural re-Islamization – the wearing of the hijab and niqab, an increase in the number of mosques, the proliferation of preachers and Muslim television channels – has happened without the intervention of militant Islamists and has in fact opened up a ‘religious market’, over which no one enjoys a monopoly. In short, the Islamists have lost the stranglehold on religious expression in the public sphere that they enjoyed in the 1980s.”

By reaching out to parties and Islamic movements that have been vilified for the past decade, the Obama administration is taking a risk, especially in an election year. Brotherhood members continue to make contradictory statements in regard to their plans and goals for a new Egypt, and the group’s most prominent affiliated cleric, Yusuf al-Qaradawi, regularly issues the grossest anti-American and anti-Semitic slanders on his Al Jazeera show. There is clearly reason for concern. But, if the U.S. is to be serious about democracy promotion, it is unclear what other options exist.

“We’re going to have to get used to the fact that there’s a strong Muslim Brotherhood presence in Egyptian politics,” Cook concludes. “It doesn’t mean we shouldn’t speak out then we disagree with their policies, but this is the reality. The question is: Do we adjust? Or do we forever fight against the political will of the people in the region?”