Who's afraid of Ricky Gervais? 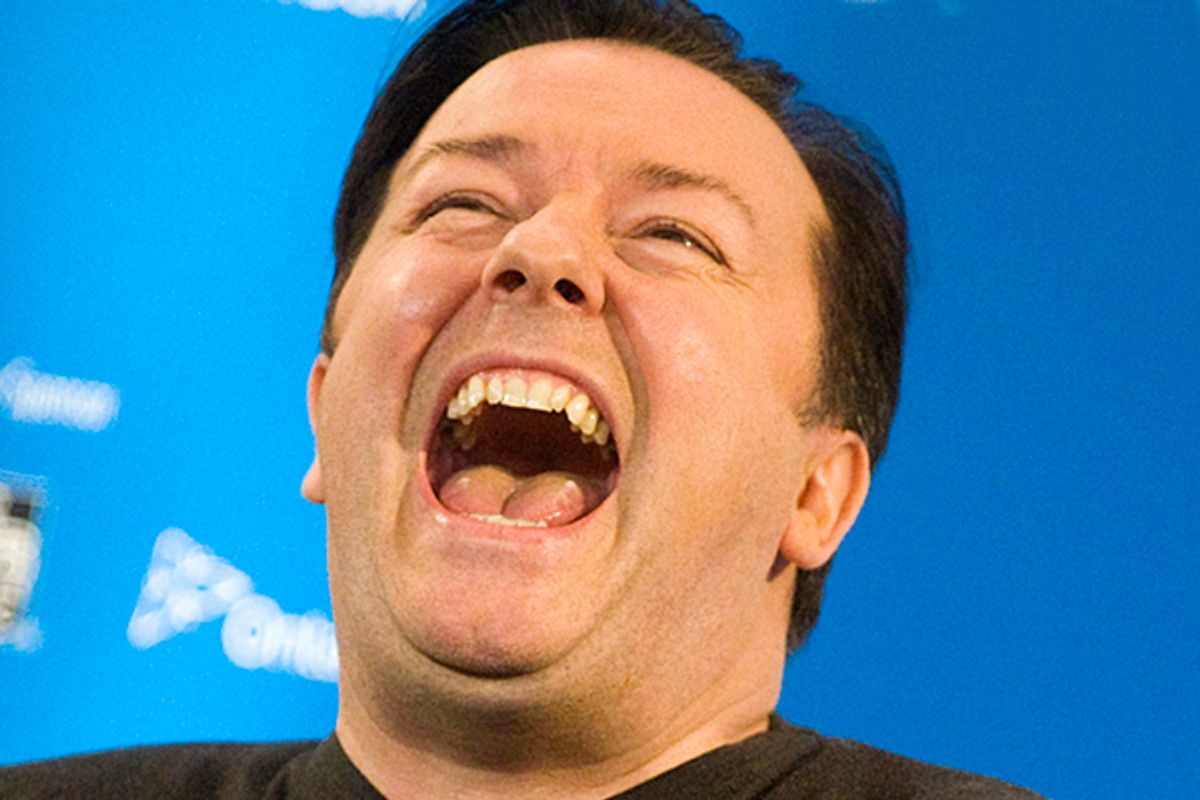 In the lead-up to Sunday's Golden Globe Awards, all eyes are on the return of host Ricky Gervais -- specifically about the snark that earned him a career-enhancing dose of notoriety when he took some swings at his fellow celebrities at the same ceremony last year.

Gervais is in the New York Times Magazine, where David Itzkoff explains his comedic swings from kind impulses to mean-spirited rawness. In Vulture, Willa Paskin worries that all the focus on Gervais’ edge is leading him to buy his own hype, obscuring the fact that he’s very much a part of the club he got credit for lampooning. NBC’s own ad campaign features Gervais talking about how controversial it is for him to be back. In as much as the 2012 Globes are must-see television, it’s supposed to be because of the man riffing at the podium, rather than the artists who will deliver grateful speeches from it.

All of this may cast the Hollywood Foreign Press Association, the force behind the Globes, in Gervais’ svelter-than-in-the-past shadow. But given past experience and ongoing challenges to the group's credibility, the smartest place for the association to stand may be out of the direct spotlight.

First, asking Gervais back makes the HFPA look confident and self-aware rather than prickly and insecure. At the ceremony last year, Gervais didn’t exempt his hosts from his barbs, lampooning the Globes for nominating the luxe-but-lukewarm "The Tourist." “I haven’t even seen 'The Tourist.' Who has? It must be good because it’s nominated, so shut up,” he joked. “I’d like to quash this ridiculous rumor going round that the only reason it was nominated was so the Hollywood Foreign Press could hang out with Johnny Depp and Angelina Jolie. That is rubbish. That is not the only reason. They also accepted bribes.”

At the time, members of the HFPA were angry enough for someone to go to the gossip columns and complain that Gervais wouldn’t just be banned from hosting the show again — his projects would be blacklisted, too. But punishing Gervais for something everyone has long assumed is true doesn’t dispel that belief. Especially not after the association fell all over itself to lock in George Clooney’s attendance this year, nominating him not just for his performance in "The Descendants," but for directing and adapting the decidedly mediocre political drama "Ides of March." It’s easier to defuse allegations by laughing them off than by trying to quash an embarrassing truth your host shared with 17 million people.

Having a sense of humor over its attempts to reel in a little talent would put the HFPA and its audience on the same footing going into the event. There’s nothing wrong with serving up entertainment with a healthy side of cheese. Or with acknowledging that the Academy Awards will always hold pride of place -- and refusing to let that prevent you from having fun. There’s ample middle ground for someone to claim in between taking yourself deadly seriously and drenching your guests in literal slime, like the Nickelodeon Kids’ Choice Awards.

And Gervais is more likely to provide an entertaining show than the results of the awards ceremony itself. The Globes play a role in the horse race on the way to the Oscars, but the nominations this year make for a singularly unexciting set of contests. In some categories, it’s difficult to care which already-anointed actor will walk off with this year’s trophy. When it comes to the best actor award, Clooney, Leonardo DiCaprio (nominated for the underwhelming "J. Edgar") and Brad Pitt’s careers will all continue on their merry way without a statuette, and Michael Fassbender and Ryan Gosling are on trajectories steep enough that a loss wouldn’t slow their rise. In others, snubs like "Breaking Bad" in the best drama category mean the wins will inevitably be hollow. Victory comes cheaper if you don’t claim it over your true competitors.

The best the Golden Globes can ever hope to achieve is second place in the hierarchy of awards shows. And that's where Gervais comes in. But in collaboration with Gervais or a host like him, the HFPA -- whether it intends to or not -- is producing an awards show that combines our contradictory attitudes toward celebrities. First we get them in the room, and then we cut them down to size.