A Romney showdown: Krugman versus Brooks 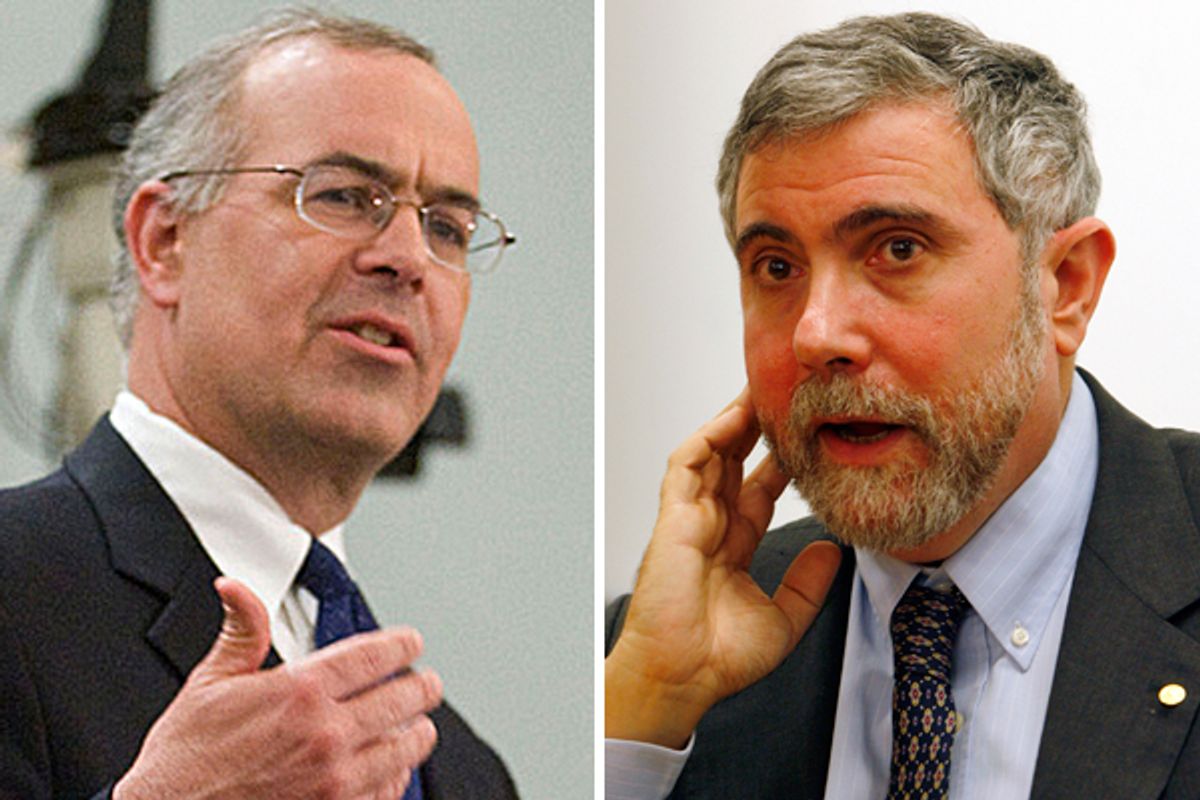 Let no one say that the New York Times Op-Ed page isn't a festival of diversity. On Friday, two esteemed regular columnists, Paul Krugman and David Brooks, tackled the same question -- will Mitt Romney's business experience position him to be a successful president? -- and delivered remarkably different answers.

Wait, no, that's not quite right. Shockingly, on at least a superficial level, Krugman and Brooks agree: Mitt's business experience as a private equity wheeler and dealer tells us nothing about whether he'd be a good president.

Krugman's argument is simple: A country is not a corporation. What might make sense for the corporate bottom line -- for example, cutting costs by laying off employees and outsourcing production to foreign countries -- makes little sense for a nation. Krugman then moves into a familiar discussion of the downsides of austerity, a topic that, whether or not you agree with Keynesian economic policy, is at least relevant to the question at hand.

Brooks' take is a little more difficult to follow. This is possibly because, after he introduces the question, he swiftly dismisses any in-depth consideration of how economic policy and business experience may or may not intersect and swerves in an utterly different (and ridiculous) direction.

What the United States needs, suggests Brooks, isn't a CEO. We need an aristocrat.

First, successful presidents tend to be emotionally secure. They have none of the social resentments and desperate needs that plagued men like Richard Nixon. Instead they were raised, often in an aristocratic family, with a sense that they were the natural leaders of the nation. They were infused, often at an elite prep school, with a sense of obligation and responsibility to perform public service.

Whether it is a George Washington, a Franklin or Theodore Roosevelt or a John F. Kennedy, this sort of president enters the White House with ease and confidence, is relatively unscathed by the criticism of the crowd, is able to separate the mask he must wear for public display from the real honest self he knows himself to be.

With this column, Brooks settles, once and for all, the question of whether he himself is an elitist. And not just any run-of-the-mill elitist! No, Brooks is a heroic, truth-telling elitist, with the courage to say what conventional wisdom about American discourse declares verboten!

In sum, great presidents are often aristocrats and experienced political insiders. They experience great setbacks. They feel the presence of God’s hand on their every move.

Unfortunately, we’re not allowed to talk about these things openly these days. We disdain elitism, political experience and explicit God-talk. Great failure is considered “baggage” in today’s campaign lingo.

I wonder, why might Americans disdain elitism? Could it have something to do with our history, our defining identity as a people who rebelled against monarchy? Could it be that one of our core values, at least until recently, is the idea that anyone, no matter what family they were born into, or how wealthy they are, or what prep school they attended, has (at least theoretically) the potential and opportunity to rise to the highest office in the land?

Brooks doesn't weigh in on whether Romney qualifies as a true blueblooded aristocrat -- although, given the fact that his father was a governor and car company CEO, the implication is obvious. What's equally obvious, however, is the slam at Obama, who was raised by a single mother and enjoyed none of the advantages that were mother's milk to Romney.

Who is more emotionally secure? Who can best withstand the "brutal" (Brooks' word) attacks that are now being directed at Romney and have been hammering on Obama for more than three years. I guess we'll find out over the next 10 months of mudslinging.

But for now, excuse me while I look for some tea to dump in a nearby harbor. All this talk of benevolent aristocracy is making me want to start a revolution.