It's easy to cut public education funding when your kids go to private school. Just ask Christie and Emanuel 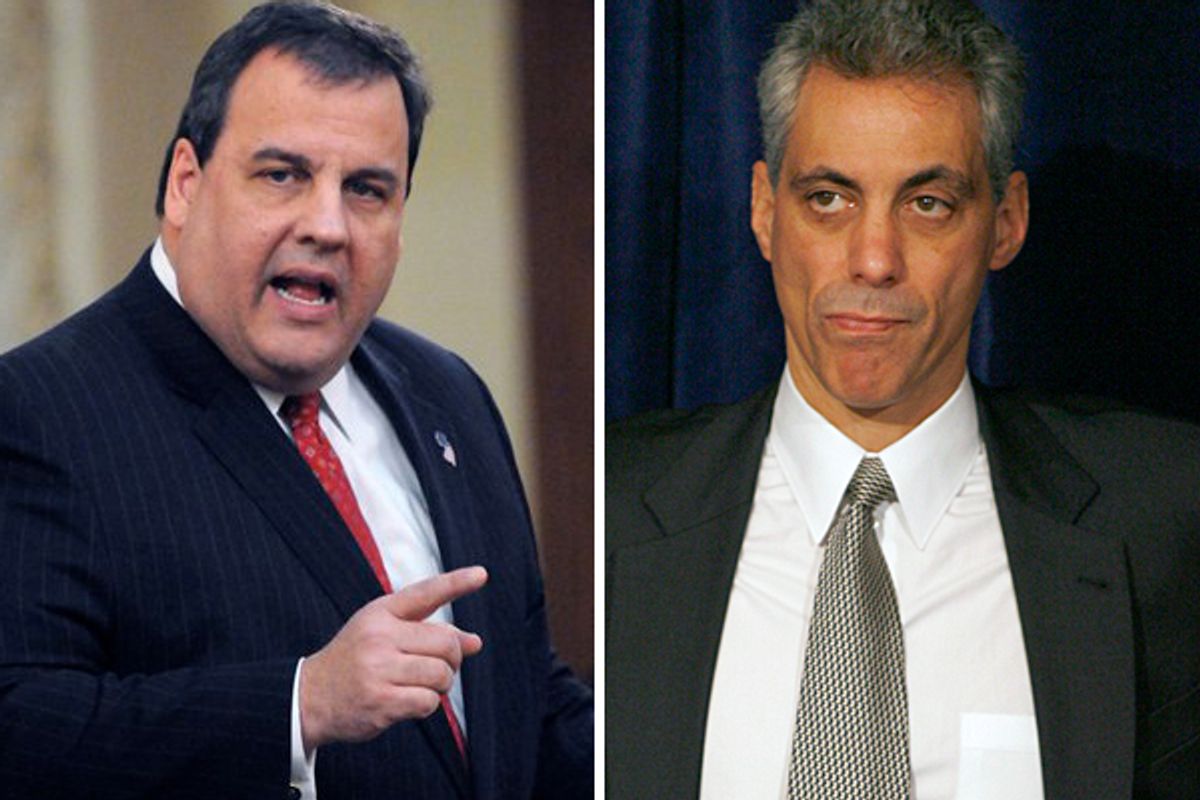 Last week, my local Twittersphere momentarily erupted with allegations that Denver's public school superintendent, Tom Boasberg, is sending his kids to a private school that eschews high-stakes testing. Boasberg, an icon of the national movement pushing high-stakes testing and undermining traditional public education, eventually defended himself by insisting that his kids attended that special school only during preschool and that they now attend a public school. Yet his spokesman admitted that the school is not in Denver but in Boulder, Colo., one of America's wealthiest enclaves.

Boasberg, you see, refuses to live in the district that he governs. Though having no background in education administration, this longtime telecom executive used his connections to get appointed Denver superintendent, and he now acts like a king. From the confines of his distant castle in Boulder, he issues edicts to his low-income fiefdom -- decrees demonizing teachers, shutting down neighborhood schools over community objections and promoting privately administered charter schools. Meanwhile, he makes sure his own royal family is insulated in a wealthy district that doesn't experience his destructive policies.

No doubt this is but a microcosmic story in a country whose patrician overlords are regularly conjuring the feudalism of Europe circa the Middle Ages. Today, our mayors deploy police against homeless people and protesters; our governors demand crushing budget cuts from the confines of their taxpayer-funded mansions; our Congress exempts itself from insider-trading laws and provides itself healthcare benefits denied to others; and our nation's capital has become one of the world's wealthiest cities, despite the recession.

Taken together, we see that there really are "Two Americas," as the saying goes -- and that's no accident. It's the result of a permanent elite that is removing itself from the rest of the nation. Nowhere is this more obvious than in education -- a realm in which this elite physically separates itself from us mere serfs. As the head of one of the country's largest urban school districts, Boasberg is a perfect example of this -- but he is only one example.

The Washington Post, for instance, notes that it has become an unquestioned "tradition among Washington's power elite" -- read: elected officials -- to send their kids to the ultra-expensive private school Sidwell Friends. At the same time, many of these officials have backed budget policies that weaken public education.

Outside of Washington, it's often the same story; as just two recent examples, both Republican New Jersey Gov. Chris Christie and Chicago Mayor Rahm Emanuel have championed massive cuts to public education while sending their kids to private school.

In many cases, these aristocrats aren't even required to publicly explain themselves. (Boasberg, for example, is never hounded by local media about why he refuses to live in Denver.) Worse, on the rare occasions that questions are posed, privacy is the oft-used excuse to not answer, whether it's Obama defenders dismissing queries about their Sidwell decision, Christie telling a voter his school choices are "none of your business" or Emanuel storming out of a television interview and then citing his "private life" when asked about the issue.

This might be a convincing argument about ordinary citizens' personal education choices, but it's an insult coming from public officials. When they remove themselves and their families from a community -- but still retain power over that community -- they end up acting as foreign occupiers, subjecting us to policies they would never subject their own kin to.

Pretending this is acceptable or just a "private" decision, then, is to tolerate ancient, ruling-class notions that are no longer sustainable in the 21st century. Indeed, if this nation is going to remain a modern republic, it can't also be a Medieval oligarchy -- no matter how much America's elite wants to keep governing from behind the palace walls.