Edging toward intervention in Syria 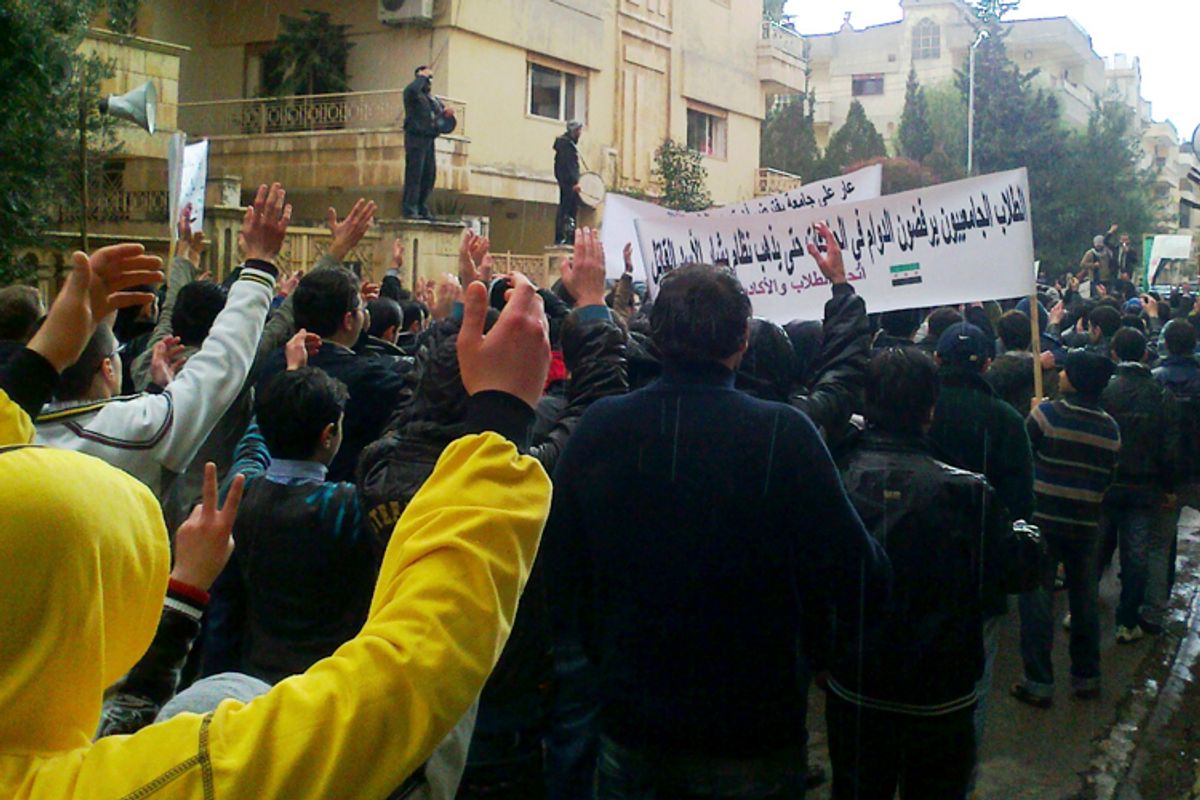 On Monday, a unity agreement between Syria's two main anti-regime groups collapsed over the issue of foreign military intervention in the country's 11-month-old internal conflict. As anti-government demonstrations and police violence continue, there is still no immediate prospect of a NATO or international military intervention like that undertaken in Libya.  But that doesn't mean it won't happen.

Syria is a unique case. Unlike Libya it doesn't have a lot of oil. Unlike Egypt, it is not controlled by a U.S.-funded ally. What it does have is an increasingly violent dictatorship and a growing but divided opposition. The government of Bashar al-Assad shows no signs of weakening resolve, and Arab League monitors in the country have drawn criticism (and live fire) for their work.

The Syrian National Council, which is dominated by Syrian émigrés in Turkey and Europe, has reiterated its calls for foreign military intervention despite contradictory remarks from some of its members. The SNC wants to establish a no-fly zone over northern Syria to provide a safe haven for refugees and the loosely organized "Syria Free Army" in preparation for NATO and Arab League-backed operations against Assad’s loyalist forces.

The National Coordination Body, composed of left-wing Syrian Arabs and Kurds operating inside Syria, continues to warn against foreign intervention and expansion of armed resistance to Assad.

The unity agreement's collapse -- and reports suggesting that a majority of the Syrian opposition and demonstrators now favor foreign military intervention -- may help strengthen the hands of those in the West who have argued for such action from the beginning.  In Washington a "time-limited, scope-limited military action" as implemented in Libya this past year appeals to both Obama administration policymakers who say they are guided by a "responsibility to protect" and to neoconservatives who favor "regime change" in Damascus to isolate Iran and Islamist groups.

The SNC consists of representatives from seven factions, according to former French diplomat Ignance Leverrier, including "the local coordinating committees organizing resistance on the ground in Syria; the Muslim Brotherhood (which was banned by Syria's secular opposition parties in the Damascus Declaration); 'independents' who belong to no political party; technocrats; the Kurds; and the [Bedouin] tribes.”

Leverrier, who supports recognition of the SNC as Syria's legitimate government, says the council is better-informed and more representative of popular opinion than the National Coordination Body. He acknowledges, though, that the council is led by  émigré intellectuals who have had limited interaction with people inside of country. His call for intervention echoes last year's call among Europeans, especially the French, to act in Libya, though in this case of Syria, Europe's position is probably more about asserting its littoral influence than securing economic opportunities in a post-regime environment.

For outside interlocutors assisting the SNC, there is the London-based Henry Jackson Society, which is described by the Guardian as a British group with close ties to American neoconservatives. (The group is named for the hawkish senator from Washington state, who died in 1983.) The American-born communications director of the HJS, Michael Weiss, drafted the "Safe Zone for Syria" document cited by the SNC and advocates of intervention as a blueprint for creating a no-fly zone. The document was prepared with the input of Syrians, according to HJS.

Writing in Slate last June, Weiss assured his audience that "intervention at this moment would be premature, because Syria’s various opposition groups have yet to coalesce into a unified political force worth backing." But he added that the Syrian opposition constitutes "the most liberal and Western-friendly of the Arab Spring uprisings," with the clear implication that they deserve U.S. support.

"The more time the world gives Assad, the more he makes a mockery of the 'responsibility to protect' doctrine and the more people begging for Western assistance are simply wished the best of luck and left to their grim fate," he wrote recently in Foreign Affairs,

Other prominent voices in the insular but influential world of neoconservative thought include a team of defense specialists at the hawkish Washington Institute for Near East Policy who recently issued a report concluding, "Intervention in Syria would be a demanding mission carrying significant risks," while also asserting that "intervention also presents policy opportunities."

Marwa Daoudy, a former U.N. official and critic of intervention, has noted that idea is supported by a who’s who of Iraq War boosters. One of them is Fouad Ajami, a professor at Stanford, who endorsed NATO airstrikes against Moammar Gadhafi's forces this past year. Last March, Ajami wrote that "Benghazi would have been Barack Obama's Srebrenica" if he had not intervened militarily in Libya. "The right thing, at last," Ajami wrote of NATO's intervention. "The cavalry arrived in the nick of time.” Ajami is critical of Obama and Hillary Clinton's allegedly "paralyzing caution" toward Syria.

As Ajami's comments show, the tragedy of Srebrenica in 1995 – a horrific eruption of ethnic cleansing that killed 8,000 people within sight of a U.N. “safe zone” – animates all sides of the Syria debate. So too has the Rwandan genocide of 1994. Weiss has referenced it in his writings, and at least two prominent Obama officials found President Clinton's refusal to intervene in that conflict appalling and pushed a reportedly hesitant Pentagon to move quickly.

One of the most influential advocates for intervention in Libya was Samantha Power of the National Security Council, who is only half-jokingly described as Obama's Paul Wolfowitz by reporter David Rieff. Power is the administration's most outspoken advocate of "the responsibility to protect" concept, which in its broadest interpretation "holds that when a sovereign state fails to prevent atrocities, foreign governments may intervene to stop them."

United Nations Ambassador Susan Rice, an NSC staffer during the Clinton administration, was in the interventionist camp in Libya that drew lessons from Rwanda. Time reported that it was Rice who, by virtue of her forceful maneuvering at the U.N., got Secretary of Defense Robert Gates off the fence about committing U.S. air assets over Libya. The National Review suggested that the Pentagon was  "outmaneuvered by three women: Clinton, Power, and ... Rice."

To their number should also be added Anne-Marie Slaughter, who up until the month before the U.S. intervened in Libya was head of the Obama State Department's in-house "think tank." Since leaving her post, she has praised the success of the "responsibility to protect" approach in Libya:

For the first time, international law and the great powers of international politics have recognized both the rights of citizens and a specific relationship between the government and its citizens: a relationship of protection. The nature of sovereignty itself is thus changed; legitimate governments are defined not only by their control of a territory and a population but also by how they exercise that control. If they fail in that obligation, the international community has the responsibility to protect those citizens.

Obama, though, did not make his decision solely on humanitarian impulses. Mark Thompson of Time notes how Obama implemented the "responsibility to protect" doctrine: with “a push toward multilateralism and a willingness to hand off command (and responsibility) to others." Even so, Weekly Standard editor Bill Kristol praised Obama as a “born-again” neoconservative on Libya.

The interventionists continue to push. The SNC has met with Hillary Clinton, and State Department spokesman Mark Toner said on Dec. 28 that the U.S. “would consider other means” in Syria besides sanctions if Assad did not back down. Until at least 2010, President Obama continued the Bush administration’s funding of overseas Syrian dissident groups. And Foreign Policy reports that the administration has convened a National Security Council policy forum with officials from the Treasury and State Departments. Fred C. Hof, a diplomat and academic considered one of the main people linking the U.S. State Department to the Syrian opposition, is a leading member of this small and secretive convocation.

Another factor is Turkey's role. Any effort to enforce a NATO no-fly zone -- either to maintain humanitarian corridors or protected base areas for anti-Assad fighters -- would require active cooperation from Turkey. While Turkey denies reports that it has been planning to intervene militarily, the “Free Syria Army” – a loose coalition of anti-Assad fighters – is operating from Turkey, and the Turkish Foreign Ministry is holding meetings with SNC representatives. It is clear that Ankara is taking a hard look at the possibility of a post-Assad Syria. Turkish Prime Minister Recep Tayyip Erdogan told reporters this week that Syria is on the verge of civil war. Since November, Turkish diplomats have been dropping hints that Ankara would consider intervention if the violence gets worse.

Israel is mostly concerned about the influence of Iran. Top Israeli officials have expressed their dismay over the Arab Spring, asserting that it will only empower Islamist groups. But Defense Minister Ehud Barak has also said that Israel views Assad's overthrow as a matter of when, not if. He did note that military intervention did not seem appropriate at this stage, mainly because in Israel's view, there is no group yet that Tel Aviv feels it can engage with when Assad is gone.

Syria’s sectarian divisions and central position between Israel and Turkey make it far harder for Washington to reach a consensus on the SNC. At the same time, the centrality of Syria makes it a tempting prize for Washington to gain influence in, if its opposition can somehow be managed. As the Syrian opposition remains fractured and the conflict threatens to spill over into Syria’s neighbors, Burhan Ghalioun’s promises to distance a new Syrian government from Iran and Hezbollah may carry enough weight in Washington to tip the scales in the interventionists’ favor.