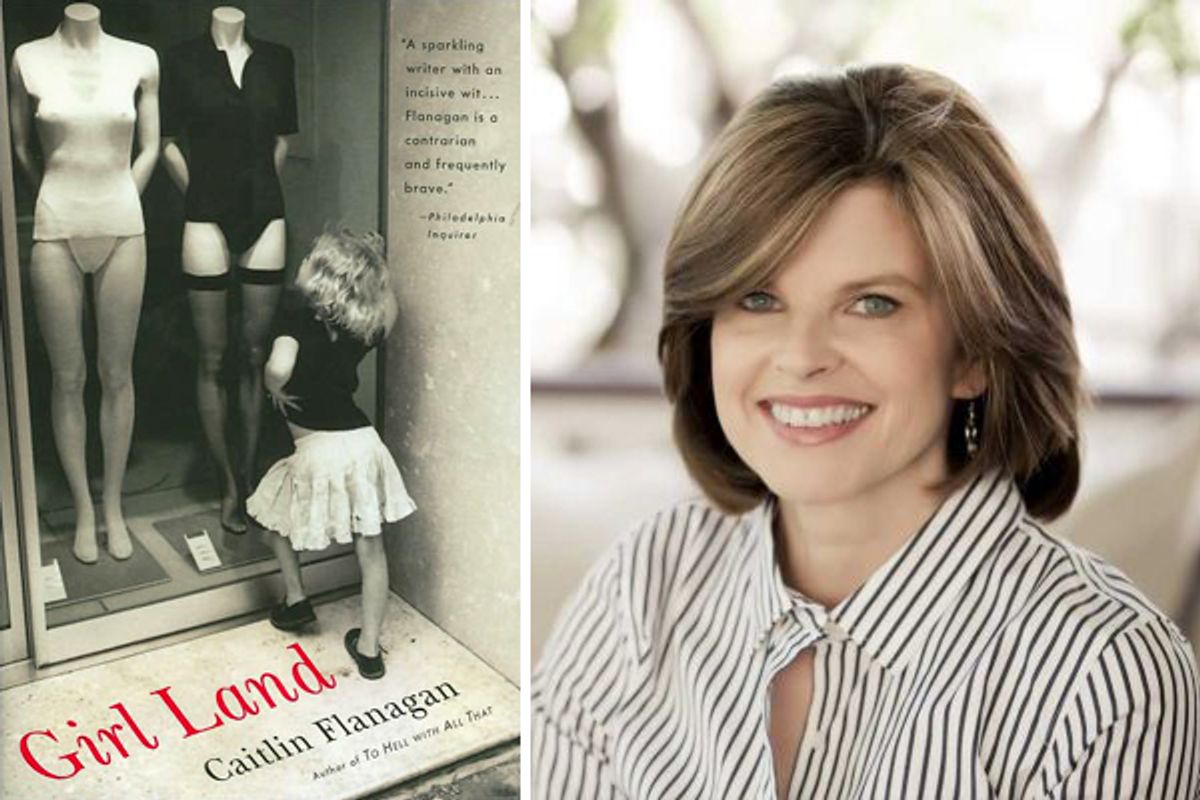 Of the many questions formed while reading Caitlin Flanagan’s “Girl Land,” most pressing is why it was written at all. One convincing answer comes not from its pages – which are filled with gauzy pronouncements on female adolescence, the occasional literary or even historical close reading, and no particular argument or thesis -- but from an interview on Vogue’s website. In it, Flanagan says, “I didn’t write this book from the perspective of being a parent; I wrote it from the perspective of my girlhood being so intense for me.”

Flanagan works as a critic, was once a teacher and counselor at an elite private school, and is the mother of two boys, but somehow nothing has matched the intensity of that girlhood; it forms the only authentically compelling material here. Roll your eyes all you want, and I did, at declarations like “one of the signal differences between adolescent girls and boys is that a boy does not fetishize the tokens of his childhood.” (Flanagan appears to have missed the past couple of decades in popular culture.) But then comes the quiet horror of Flanagan's unerringly detailed recounting of an attempted rape she experienced at 16, and what it taught her about power and control and shame.

But this is not a memoir, or it rarely is, and it’s not clear why. After all, a memoir might conveniently free Flanagan from one of her fiercest hostilities — her resistance to empirical data or any evidence at all. (Or, as I learned when she twisted quotes from an interview I conducted far out of context, her refusal to allow facts to interfere with her point.)

Flanagan mocks, for example, the suggestion on a Planned Parenthood site that abstinence-only education is linked to the rise of previously exotic forms of sexual activity (read: oral and anal) for teens who want to stay “virgins.” She concedes the existence of a Columbia University study that found that abstinence pledgers were far more likely to have those forms of sex, but sniffs, “I would hardly count Columbia as the go-to source for information on the hearts and minds of evangelical teenagers.” Yes, what do those wine-sniffing Upper West Side liberals know -- except that the study, published in a peer-reviewed journal, actually drew on longitudinal data of 12,000 teenagers. This is rich coming from an author whose most decisively cited sources include “a friend who attended a leadership conference for girls” and “every woman I’ve known.”

Katie Roiphe may have (accurately) panned Flanagan’s book in Slate, and Flanagan may have just disdained Roiphe’s love of Joan Didion in the Atlantic, but the two have some things in common -- and it's not just the ire of less speculative feminists. Both were raised in privileged liberal enclaves that they simultaneously seem to loathe and be incapable of seeing beyond. They skewer these earnest precincts in occasionally devastating detail, successfully positioning themselves as sage truth-tellers more attuned to the red-blooded America, but they never get very far afield. In “Girl Land,” Flanagan is especially guilty of draining her coordinates of specificity, when she may as well own that this is really about Cambridge, Berkeley or the North Shore of Long Island at a very particular time. Or that it’s about her own parents, particularly her mother, with whom she is continuously upset for failing to protect her from the cruelties of the world.

Much like Roiphe’s partisans, Flanagan’s defenders -- I have never met a female one, or as Flanagan herself might put it, “every woman I’ve ever known” is infuriated by her -- cite her prose styling as an end to itself. That strikes me as a low bar. If these admirers truly believe that they are saying something brave and contrarian about women and girls, I suggest they spend more time outside the places Flanagan and Roiphe can’t seem to leave.

As for the place Flanagan calls Girl Land, it is full of “romance” -- Flanagan’s favorite word, as in “the emotional life of a little girl is drenched with romance.” Its borders are arbitrarily designated by Flanagan’s nostalgia, with chapter titles giving equal weight to “menstruation” and “proms.” The book includes a hopscotch through other people’s social histories and examinations of era-specific icons like Patty Hearst and "Go Ask Alice." (Flanagan is upset, for the record, that "The Diary of Anne Frank" is shelved in the Holocaust section).

There is romance in Girl Land, Flanagan repeatedly reminds us, but there are also looming dangers, like sexual violence and objectification. But Flanagan is too lacking in empathy and too interested in imposing the contours of her own life and her own conservative counter-rebellion to shed much light on them. (For meatier stuff on girls who are not Caitlin Flanagan, you might instead read Peggy Orenstein on the rise in the marketing of “pink” culture, or Rachel Simmons on girls’ friendships and bullying, or Jaclyn Friedman on developing an authentic sexuality in a world that wants to commoditize and homogenize it.)

Flanagan seems troubled by how the culture reduces female sexuality as being acted upon or being looked at by men, a reality to which girls are often rudely introduced, and yet she is uninterested in doing anything about it except keeping girls from this supposedly immutable truth for as long as possible. For all of the vague talk of sexual awakening in "Girl Land," it takes a hundred pages for female desire to get any real airing. She sounds pitying when girls are shamed for being sexual (though she tends to cast these as misguided bids for affection) but proposes reviving the same old-fashioned strictures that enforce that shame: “Society has let its girls down,” Flanagan insists, by denying that “female sexuality is as intricately connected to kindness and trust as it is to gratification and pleasure. It is in the nature of who we are.” Just take her word for it.

Despite dipping into histories of how being a girl in America has changed over the past century or so, Flanagan has a retrograde vision of the safe home, guarded by a male protector, that seems utterly ignorant of how lives are more often lived. The most bafflingly terrible portion of the book is a series of tips at the end on how to preserve the endangered Girl Land. Tip No. 3 is “Get her father involved in her dating life,” because that renders adolescent girls “far less likely to be targets of the kinds of boys who become emotionally, physically or sexually abusive.” Really? What if her father, or equivalent thereof, is also any of those things, a sad truth of many girls’ (and boys’) lives?

As for that "dating life," it's worth mentioning that non-heterosexuals do not exist in this book, though they do more than ever in the real Girl Land. Flanagan also has curiously little to say about the boys that might visit Girl Land; her two sons are barely mentioned. Perhaps she wants to maintain their privacy, and yet it’s impossible not to wonder why she cares so little about how the way societies raise sons might affect the lives of girls. Boys in Flanagan’s imagination are usually crude creatures, free of emotional complexity or sexual shame, waiting to despoil Girl Land. There is the lightly intriguing parenthetical, in the discussion of moral panics (to her credit, Flanagan is healthily skeptical of the teen oral-sex “epidemic,” calling out the creepy prurience of the adult freakout). She says that “the demonization of boys oversimplifies the problem and spares on the arguably sadder truth.” Apparently, the "sadder truth" is the actual virility of teenage boys (which, gross) but this is a missed opportunity for an avowed expatriate of Girl Land to think critically about the lives of boys.

One of Flanagan's proposed solutions is to refuse girls Internet connections in their rooms, as if this would somehow keep the world out. But then, this is an essential problem with what tacked-on argument the book does contain. Correctly identifying a culture that is often suffused with terrible and constricting messages for girls, Flanagan’s proposed remedy is to protect them in their presumed vulnerability, instead of trying to equip them with the tools to be strong.