The scandal that isn't on the video

Is it worse to desecrate a few corpses than to mass produce a lot of them? 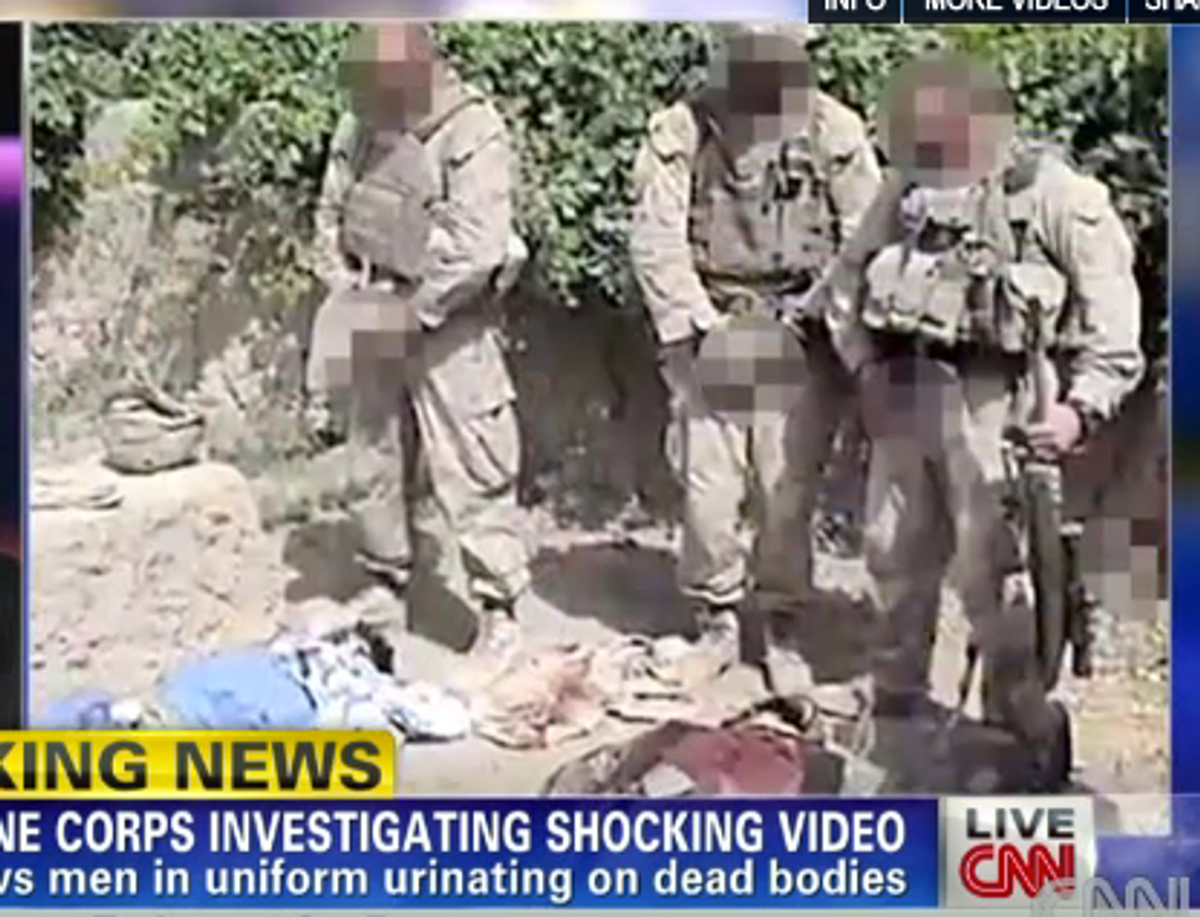 The United States and its allies were quick to go into damage control mode to try to contain the political and diplomatic fallout from a video posted on YouTube apparently showing US Marines urinating on the mangled corpses of dead Afghans,

A Pentagon spokesman, Captain John Kirby, told CNN: "Regardless of the circumstances or who is in the video, this is egregious, disgusting behavior. It’s hideous. It turned my stomach."  Afghan President Hamid Karzai agreed. “This act by American soldiers is simply inhuman and condemnable in the strongest possible terms.”.

It ought to go without saying that urinating on  corpses, whether of Taliban fighters or Afghan civilians (or any one else for that matter), is disrespectful and degrading and ought to be condemned. What is interesting, and somewhat unsettling, about the outpouring of sentiment following this new scandal, however, is that it raises more questions than it answers.

Isn’t it odd, for example, that there seems to be more concern about urinating on these bodies than there is about the actual killing that transformed them from living human beings to splayed-out corpses in the first place? Is it really possible that peeing on dead bodies is seen as horrific, but killing people is perfectly acceptable? Isn’t something missing from this picture?

This seems an especially pressing question given that much of the US military (and related CIA) effort in Afghanistan and Pakistan so often seems to involve simply killing—or, to use the rather more circumspect military term, “degrading”—as many militants as possible, not necessarily in actual combat operations, but by twos and threes and tens and dozens, in bombings and air raids and drone attacks, as they sleep or drive or eat or pray or brush their teeth. Day after day we read reports of 8 militants being killed here, 5 being killed there , and 6 somewhere else. It is as though the earth keeps vomiting forth “militants,” who then simply need to be mown down like so much vermin in a “war” reduced to its lowest common denominator—killing for the sake of killing, without any kind of strategic aim or vision or logic, much less a sense of when it might end.

Sure, every now and then someone (very rightly) raises a question about how many civilians are being killed in air raids or drone attacks in Afghanistan or Pakistan; not that it makes any difference. There is even the occasional report about the “vast drone/killing operation” being conducted by the Obama Administration, and a few people, including Glenn Greenwald, have been warning of the menace that an unchecked, unregulated, program of extrajudicial executions means, or ought to mean, to Americans and others alike.

But, these exceptions aside, the routine, hum-drum slaughter of “militants” slips by far too readily without sufficient questioning, without enough people pausing to ask who these people are, what they want, what threat they really pose to the US with their AK-47s and RPGs, what plan, if any, there is to do something to stop their seemingly autochthonous emergence (by addressing its causes, for example) rather than merely mowing them down by the dozen after they emerge--or whether the plan really is simply to go on killing as long as there is a supply of living bodies to soak up our ordnance. After all, President Obama has deliberately chosen to kill rather than capture people because he knows that pictures like those that emerged from Abu Ghraib and Guantanamo are bad news—but that there will be few pictures and fewer questions about the endless slaughter of anonymous militants in the dusty backwaters of Afghanistan and Pakistan.

For all the furor, the current scandal proves that point all too grimly, precisely because the scandal consists in the urination rather than the killing itself.

Marine Commandant Gen. James Amos called the act of urinating on the corpses “wholly inconsistent with the high standards of conduct and warrior ethos that we have demonstrated throughout our history.” A NATO spokesman added, “This disrespectful act is inexplicable and not in keeping with the high moral standards we expect of coalition forces."

But what does it mean to speak of a “warrior ethos” and “high moral standards” in a war when most of the killing is being done by remote control—and not in the heat, intensity and sweaty, adrenaline-driven fear of battle (which the very concept of a “warrior ethos” is supposed to describe), but rather clinically, in air-conditioned comfort, from the safe distance of 20,000 feet—or, rather, 10,000 miles?

It is all too easy to look at the young Marines urinating on the corpses in that video and condemn them (rightly) for their callous brutality. It is far more difficult, however, to put their adolescent action back in its fuller and more meaningful context and ask ourselves what it means that we hardly seem to attach more value to a human life than they do, and that we have come to accept the “reaping” of human lives—for it is not without reason that one of the biggest drones is called Reaper—as a matter to be dismissed with a careless flick of the morning newspaper or click of the mouse.