When Michelle Obama came for lunch 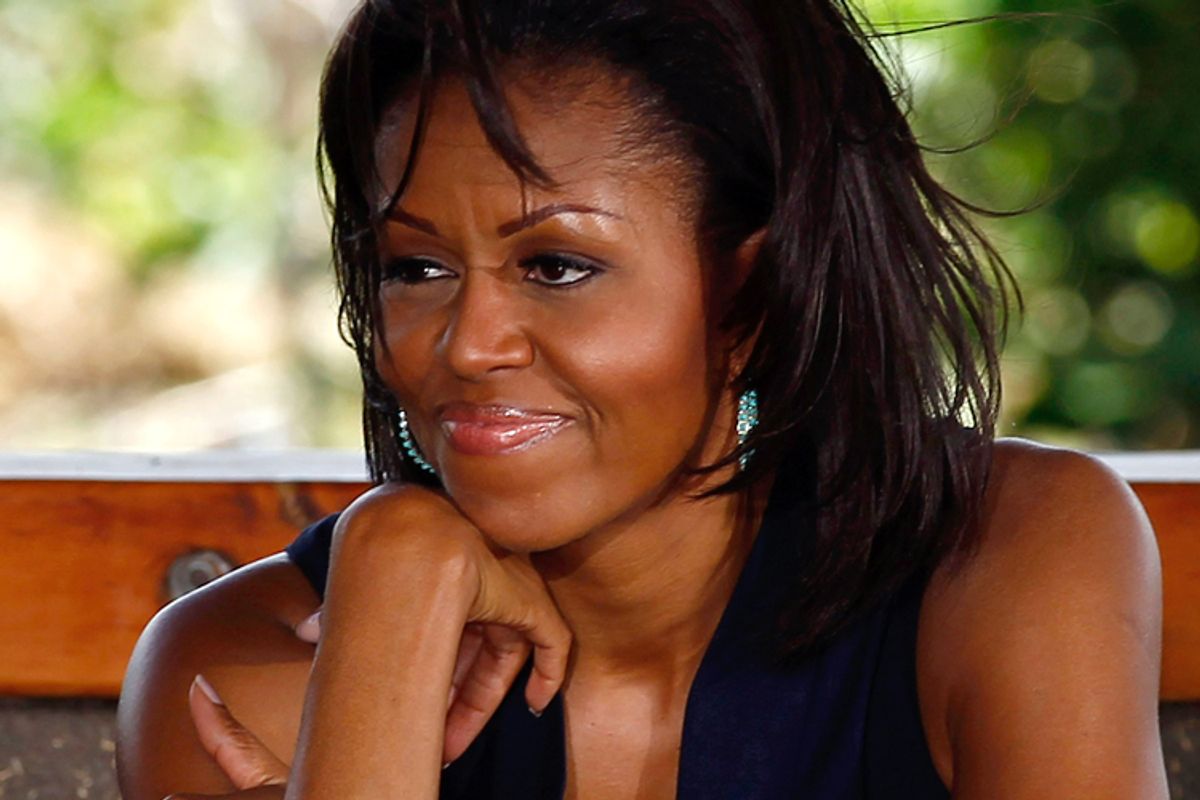 In my dream scenario, titled “Michelle Obama Drops By for Lunch,” there are a few givens. I’m:

In reality, when Michelle came for lunch,

I’d been working the lunch service as a line cook at New York City’s Gramercy Tavern for about three months when one morning I arrived to find a secret service agent inspecting my prep.

I froze. Had my sous chef called the FBI to investigate why my carrot puree always needed more salt? As I tried to remember the name of a good lawyer, our Executive Chef, Michael Anthony, motioned everyone to the pass.

“Listen up, guys,” he said, with a grin. “The first lady is on her way in for lunch with a few friends. Everything is going to run just as it would during a normal service, but we’re just going to be extra sharp today, OK?”

I studied social theory in college and, upon graduation, quickly realized that my degree was practical only if I wanted to foment a Marxist revolution. While working at a nonprofit, I found myself craving hard skills that could deliver instant enjoyment, so I enrolled in evening culinary school. I had no agenda, just a love of cooking and a vague notion of eventually writing about food.

I didn’t imagine I’d end up as a line cook. During school, I staged -- or interned -- at Jean-Georges. There, I spent days peeling and julienning carrots in a windowless basement, wearing a dorky hat signifying to all that I occupied the bottom rung of the kitchen brigade. Few people spoke to me, I snuck radish peelings for lunch because eating in the kitchen seemed to be a sign of weakness, and the closest I got to the master was when he sliced his morning bagel on my cutting board.

I’d all but sworn off professional kitchen work when, at the urging of a friend, I spent a day at Gramercy Tavern. Chef Anthony introduced himself, then invited me to watch him build a halibut dish, going from station to station, taking a little garlic from here, some thyme from there, a radish, some olives, a strawberry (really, a strawberry?). Around us, line cooks whirled through their prep, juggling pans and utensils, cracking jokes. One sang “chowder base” to the tune of Lady Gaga’s “Poker Face” – “muh muh my chowder base, muh my chowder base” – as he stirred a big pot. The atmosphere was exhilarating, lively -- worlds apart from my previous stage.

Chef effortlessly navigated the line, anticipating the movements of his cooks so that no one bumped into anyone else. I tagged along, bumping into everyone. He cooked, tasted, then handed me a spoon. “Needs a little salt?” he asked. I tasted and shook my head no, baffled that the combination worked.

A few days later, to the surprise of friends, family and myself, I asked to be considered for a full-time position, and later took over the hot appetizer station, where I was responsible for three dishes: barley-carrot risotto, lamb ragu and, a dish added just a week prior to Michelle’s visit, spinach fettuccine with mushrooms.

Moments after Chef’s announcement, my fellow line cooks started taking bets on what the first lady would order: “$50 on char!” one called out. “$25 on the trout!” crowed another.

No one bet on any of my three dishes, myself included. She just didn’t seem like a pasta-for-lunch kind of gal.

When the computer spit out the first ticket and Howard, the sous chef, called out, “Obama, VIP,” I was so focused on readying my prep that I barely heard him read out her order: She’d start with a salad, and finish with an entrée portion of … my fettuccine.

For an instant, I was standing on the White House lawn against a backdrop of a giant American flag, expertly flipping mushrooms in slow-mo while the president clapped me on the back, laughing and chanting, “Pasta we can believe in!”

I came to. The appetizers had gone out and the kitchen was swarming with sous chefs, one of whom – we’ll call him Andy – was standing at my station.

“I’m going to be handling this,” he said, and when my face fell, he added, “Bring me seven perfect spinach leaves from the walk-in.”

“But— but—” I began to protest, but Andy was already in the zone, setting up his pans, tasting the pasta water for seasoning. I headed toward the stairs, fuming.

Yes, he was an experienced cook and I’d just started. I’d only made the dish a handful of times, and once, my mushrooms had burst into flame, nearly singing my eyebrows off.

But still, I thought as I passed the agent and tromped down the stairs. She picked my pasta. It was my dish. I could handle it. Couldn’t I?

I pushed open the door to the walk-in and proceeded to have a crisis of faith. What did it matter if the leaves were perfect? When they hit the pan, they’d wilt into a green blob anyway, I thought as I ripped open the bin of mizuna — the most expensive salad green in house — and angrily shoved a handful in my mouth. I didn’t even like mizuna. What am I doing in this kitchen anyway?! I grabbed another handful of mizuna, gathered my spinach, and headed back upstairs.

“Corner!” I shouted, rounding the bend. I returned to a kitchen crowded with waiters, busboys, sous chefs and Chef and instead of jostling for position, I paused by the secret service agent. This was the guy who would, presumably, throw himself in front of a bullet to protect the first lady. His eyes moved down to my spinach leaves and hovered there, briefly, before scanning up to meet mine. I gave him a shrug and quick smile, meant to convey, “We all do our part.” He moved his cold, dead eyes back to the kitchen.

Sous chefs, who rarely cooked food to order, were working alongside experienced line cooks, and Chef himself was correcting sauces, adding a spritz of lemon here, a dash of vinegar there, plating dishes and supervising all at once. I watched Andy accomplish in four simple moves what took me twice as many to do — drop the pasta, sear the mushrooms, reduce the sauce and heat the spinach pan. The person next to him asked for a pot, he asked for oil, and both gave the other what he needed without missing a beat. Every movement in the kitchen was quick, deliberate, focused.

I rushed to Andy and, in my most patriotic act to date, handed the perfect leaves over. Something clicked as I watched them hit the hot pan and instantly shrivel. I’d ironed my chef’s coat in culinary school not because it was the first step toward a clean, orderly kitchen, but to dissuade my instructor from referring to me as “la vagabonde,” which he did with regularity. I’d perfected my carrot-peeling swipe at Jean-Georges not to maximize efficiency, but because I harbored a ridiculous fantasy that Jean-Georges would single me out for my peeling skills and reward me with a truffle dinner. Here, I realized a truth of this high-functioning kitchen: Michelle would never know that the leaves I’d picked were the seven best leaves in the bin, but the kitchen would. These chefs pursued excellence for its sake alone.

Andy plated the tangle of pasta and mushrooms, Chef gave the dish a once-over and with his nod, I sprinkled some herbs on top. A waiter wiped the rim clean and whisked the plate out to the dining room. The whole episode, from the moment the entrée course was called until it went out, couldn’t have taken more than five minutes.

Instantly, the kitchen downshifted – one cook grabbed a sip of water, another wiped down his station, quick smiles were exchanged. Andy clapped me on the back and headed downstairs to prep for dinner service and I returned to my station, heady and conscious of my movements as never before. I glanced down at my spattered apron and quickly untied it, turned it inside-out, and put it back on. Howard caught my eye and nodded.

When the busboys returned with plates from Michelle’s table, I found the pasta dish. It was eaten clean, not a spinach leaf left. I felt a twinge of pride, then turned back to my work. Maybe next time, when the kitchen would be swarming with secret service agents, when the ticket spit out read “VIP, President,” I’d be at the stove.