Who's afraid of "The Tempest"? 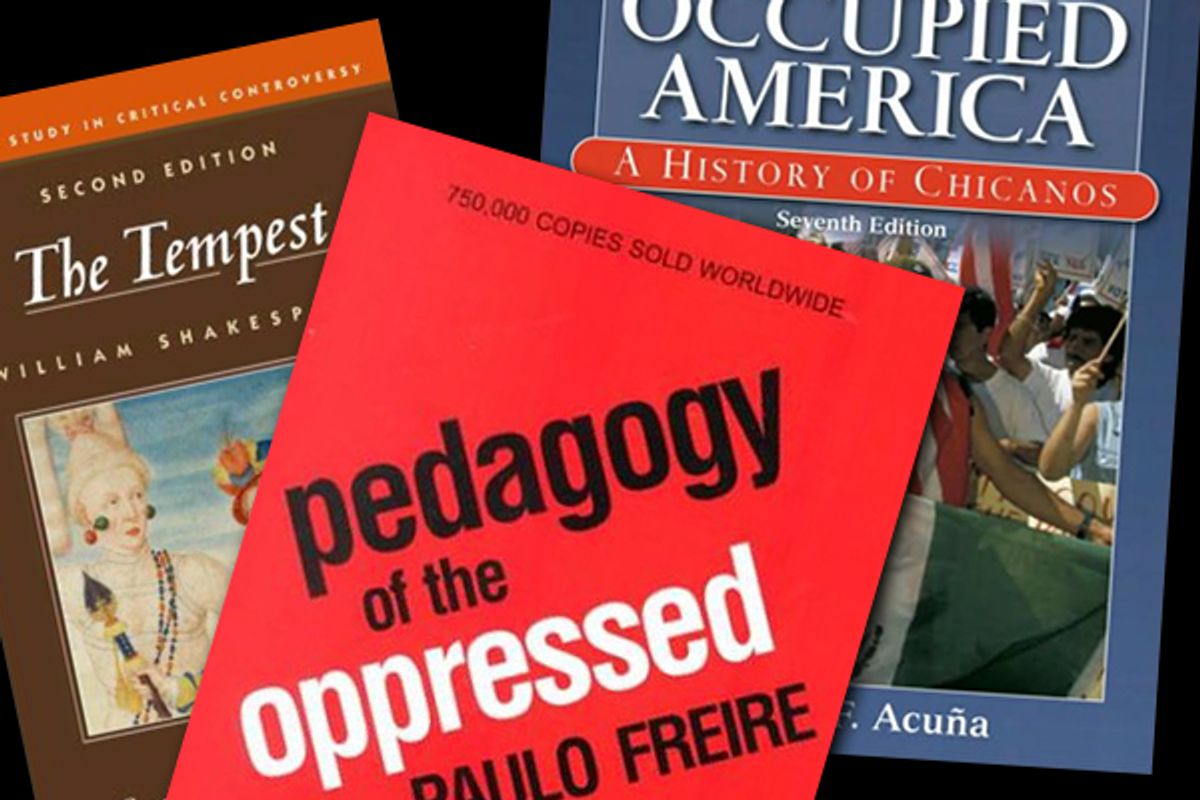 As part of the state-mandated termination of its ethnic studies  program, the Tucson Unified School District released an initial list of books to be banned from its schools today.  According to district spokeperson Cara Rene, the books "will be cleared from all classrooms, boxed up and sent to the Textbook Depository for storage."

Facing a multimillion-dollar penalty in state funds, the governing board of Tucson's largest school district officially ended the 13-year-old program on Tuesday in an attempt to come into compliance with the controversial state ban on the teaching of ethnic studies.

The list of removed books includes the 20-year-old textbook "Rethinking Columbus: The Next 500 Years," which features an essay by Tucson author Leslie Silko.  Recipient of a Native Writers' Circle of the Americas Lifetime Achievement Award and a MacArthur Foundation genius grant, Silko has been an outspoken supporter of the ethnic studies program.

"By ordering teachers to remove 'Rethinking Columbus,' the Tucson school district has shown tremendous disrespect for teachers and students," said the book's editor Bill Bigelow. "This is a book that has sold over 300,000 copies and is used in school districts from Anchorage to Atlanta, and from Portland, Oregon to Portland, Maine. It offers teaching strategies and readings that teachers can use to help students think about the perspectives that are too often silenced in the traditional curriculum."

Another notable text removed from Tucson's classrooms is Shakespeare's play "The Tempest." In a meeting this week, administrators informed Mexican-American studies teachers to stay away from any units where "race, ethnicity and oppression are central themes," including the teaching of Shakespeare's classic in Mexican-American literature courses.

Other banned books include "Pedagogy of the Oppressed" by famed Brazilian educator Paolo Freire and "Occupied America: A History of Chicanos" by Rodolfo Acuña, two books often singled out by Arizona state superintendent of public instruction John Huppenthal, who campaigned in 2010 on the promise to "stop la raza."  Huppenthal, who once lectured state educators that he based his own school principles for children on corporate management schemes of the Fortune 500, compared Mexican-American studies to Hitler Jugend indoctrination last fall.

An independent audit of Tucson's ethnic studies program commissioned by Huppenthal last summer actually praised "Occupied America: A History of Chicanos," a 40-year-old textbook now in its seventh edition.  According to the  audit: "Occupied America: A History of Chicanos is an unbiased, factual textbook designed to accommodate the growing number of Mexican-American or Chicano History Courses. The auditing team refuted a number of allegations about the book, saying, 'quotes have been taken out of context.'"

Freire's work on  pedagogy has been translated into numerous languages, and is taught at universities around the United States.

In a school district founded by a Mexican-American in which more than 60 percent of the students come from Mexican-American backgrounds, the administration also removed every textbook dealing with Mexican-American history, including "Chicano!: The History of the Mexican Civil Rights Movement" by Arturo Rosales, which features a biography of longtime Tucson educator Salomon Baldenegro.  Other books removed from the school include "500 Years of Chicano History in Pictures," by Elizabeth Martinez and the textbook "Critical Race Theory" by scholars Richard Delgado and Jean Stefancic.

"The only other time a book of mine was banned was in 1986, when the apartheid government in South Africa banned 'Strangers in Their Own Country,' a curriculum I'd written that included a speech by then-imprisoned Nelson Mandela," said Bigelow, who serves as curriculum editor of Rethinking Schools magazine, and co-directs the online Zinn Education Project. "We know what the South African regime was afraid of. What is the Tucson school district afraid of?"

Update: In response to this story the Tucson Unified School District issued a statement saying that the books removed from the classrooms are still available in the District's library system and will  be considered for possible use in the 2012-2013 school year. Salon included this information in its follow-up story.