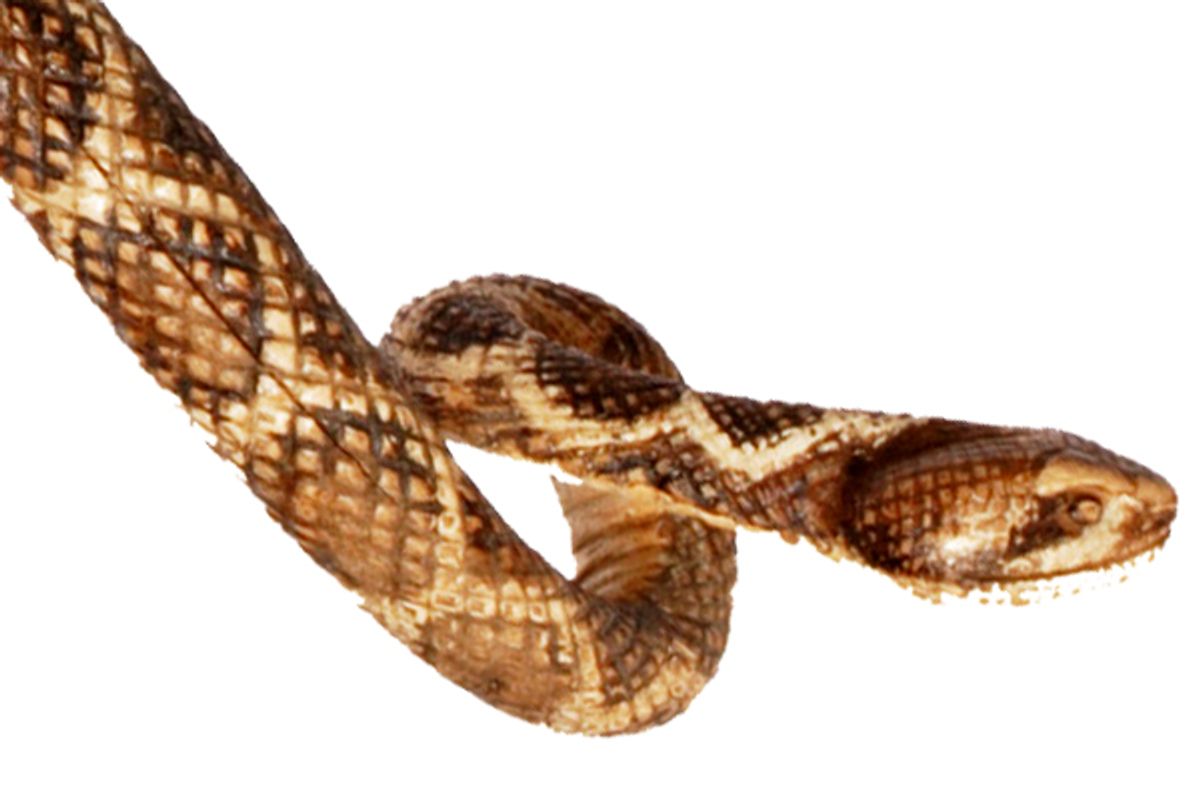 In the 19th and early 20th centuries, craftsmen from many different regions of the country used a peculiar form of sculpture -- the whittled walking stick -- to communicate social signals, convey spiritual messages and record their own personal and political preoccupations.

An exhibition currently on display at the Columbus Museum of Art presents more than 100 folk art walking sticks from the collection of the Hill family of Birmingham, Mich. Over the phone, curator Michael Hall explained what these unusual creations can tell us about the nature of sculpture -- and the disposition of folk art more generally. Click through the following slide show to see some of the exhibition's highlights.

First, can you tell me a little about the Hill collection? How and why did the Hills start collecting walking sticks?

The Hills have been collecting folk art in this area for almost 40 years. They also have an art gallery. Their business is two-pronged; their specialties are modern and contemporary art, and then -- equally and oppositely -- American folk art. They were really a part of the whole late-'60s, early-'70s rediscovery of American folk art, and early on -- by the mid-'70s -- they had discovered the idiom of the carved walking stick. At that time, this was not a well-known category of folk art production, but they kept finding these rather remarkable and unique things, and so they started collecting them.

[It started as an informal] collection of curiosities, but they've been collecting seriously for about 35 years. They see this material not just as whimsical folk art, but as a form of fairly serious folk sculpture -- something that has a message in terms of understanding modern and contemporary sculpture. This is the first time that they've exhibited these walking sticks in public. We're showing about 105 works ... When you get that many of these things in a large gallery, properly lit and presented, they're really quite impressive.

The Hills are unique collectors in that they have an interest in folk art, but a grounding in modern art. They see this material as a kind of crossover form of folk art -- something that's been theirs to explore, theirs to think about and theirs to really define over the time that they've been involved in collecting.

You're presenting these pieces as sculptures. Were any of them ever actually used as walking sticks?

That's an interesting question, and it was my first question to the Hills: Are these things purely decorative, or were they made for people with impairments? It turns out that they are honorific, fashioned for personal adornment -- these are not, by and large, things that were made for people with difficulty walking. They're more spectacular than that, they're more personal than that, and in many instances, they're also more cultural than that. I found in putting the material together that there was a strain of walking stick that was highly personal; the themes were very individualized and the stories were narratives that were coded into the forms of the stick -- we can't really ever know completely what the authors had in mind.

There's an equal and opposite strain that serves a social purpose -- for example, there are sticks carved with all of the symbols of various fraternal organizations, telling you immediately that the carrier of this or that particular stick is a member of the local Masonic lodge or the local Odd Fellows lodge. Some address religious subjects; some deal with political sentiments -- a lot of them are very nationalistic and patriotic in their symbols -- and many commemorate military service. What I guess I'm saying is that these things were social and very public -- they were more or less paraded, rather than used for physical support.

Many of the artists whose work is featured in this exhibition are anonymous. What do we know about when, where and by whom these sticks were made?

My own sense is that, in the true folk-art tradition, this was work made by individuals in a given folk community, or within a given locale, for consumption in that same given locale. I'd say most of the time the artists are anonymous. There's not a lot of history -- we don't have names of specific makers. But the Hills were able to gather works by at least five or six known makers -- known in the sense that the hand can be recognized, or the works have been very audaciously signed. There's a whole section of the exhibition given over to multiple examples from the same maker, to suggest that these artists -- like other trained artists -- worked in series, produced more than one work addressed to the same subject, and in a sense attempted to better their best or improve on their ideas. I think this is very interesting, because a lot of people seem to think that folk art is a one-off thing -- you know, somebody gets an impulse in the morning and says, "Gee, I'll carve something today," then puts it aside or gives it to their kid and that's the end of it. Not so. These are real tours de force of knife-work, painting and image-organizing (which is to say, the whole composition of the cane itself) -- and what's interesting is that it's a very restricted format. Think about trying to make an unusual and unique work of sculpture out of a 34-inch stick. You're starting with something that's pretty limited to begin with. What I like about the sticks in this collection is that the best artists were able to make something quite transcendent -- something that went way beyond what would seem to be the inherent and absolute limits built into the medium.

This exhibition is really about the issue of sculpture. And it talks about sculpture as being somewhat different from what we traditionally think of as art -- when we're thinking about paintings, for instance. A simple example: A painter in a studio looking at a white canvas is starting with emptiness and filling it up with an idea or an image. We get that, and we understand that as kind of miraculous, and we respect the creativity in it. But the carver -- particularly the carver of a walking stick -- begins with something that's already there. Perhaps they found a gnarled root along the path walking through the woods ... It suggests a form, it suggests an idea; they reach down, and in the act of standing it up or picking it up or taking it home, they have already determined to transform it. This exhibition talks about sculpture as an art not of pure creation, but of transformation -- and that's very interesting when we start to think about the whole history of sculpture: Michelangelo's transforming a block of marble into David, Rodin's transforming a lump of clay into the Thinker, and then these folk artists transforming found objects, cast-off sticks and roots, into all kinds of things.

One of the canes in our slide show features a crucifixion scene [slide 2]. Is Christianity a common theme in the collection?

Well, these canes did come from folk communities, and in many instances out of local traditions that were pretty conservative -- and yes, the conservative beliefs and the conservative mores of a community are often coded into these things. The Hills have one cane with the entire Lord's Prayer developed around the stick as a kind of spiral of information, with all the text in raised letters and then little figures that illustrate different aspects of the prayer; there's another one that recounts part of the book of Genesis in text and figuration. There's also one that has a saint's head at the top -- clearly, that's a piece from the West and comes out of that Hispanic Southwestern tradition of Catholicism. I should think that crucifixion piece, on the other hand, is probably from the southern U.S. and represents a fundamentalist interpretation of the New Testament. We do find that imagery on walking sticks; other examples are known.

I see the exhibition as having two thrusts. The first we discussed a little bit -- the business of the whole thing as a meditation on sculpture and the uniqueness of sculpture as an art form. The other has to do with the exhibition being a kind of a survey of what it is that energizes folk art -- what it is that comprises folk art that is compelling. I think this exhibition tells us that folk art is often very personal, but always very local and regional. And that the shared values, the shared mores, the shared stories that are passed around within a given folk community, tend to come full circle and inform the imagery on a lot of these walking sticks. So on the one hand, we're talking about a sculpture process that's kind of universal -- and on the other, we're talking about a content narrative that is often extremely local and regional and personal. It's the local knowledge that goes into many of these pieces that I think drives the imagery and makes them endlessly arresting. A number of people have walked into the exhibition and said, "Oh, my granddad used to whittle. I think we have something like this at home!" This is not unusual; folk art is kind of everywhere, though I wouldn't want to suggest that it's common. How many people out of a hundred actually would take the time to transform a gnarled root into a crucifixion in the form of a walking staff?

"Carved and Whittled Sculpture: American Folk Art Walking Sticks from the Hill Collection" is on display at the Columbus Museum of Art in Columbus, Ohio, through April 1.