TheDirty.com publicly names and sexually shames women. Is this the future of sex scandals? 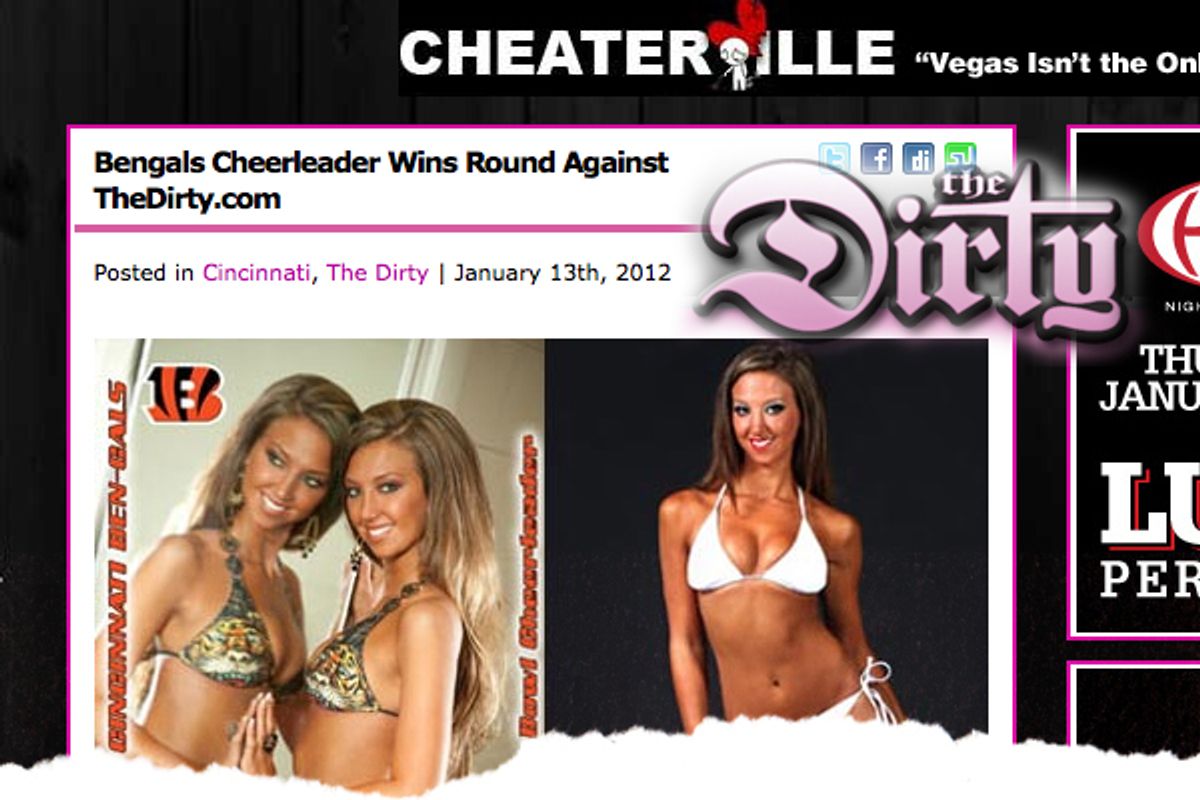 A lawsuit currently making headlines serves as a reminder of just that. This week, a judge rejected a plea by popular gossip hub TheDirty.com, which features user-submitted content, to dismiss a suit brought by a woman who was the subject of nasty rumors on the site. Sarah Jones, a Cincinnati Bengals cheerleader, alleges that she was defamed in two posts published on the site in 2009. The entries claimed that she slept around a whole bunch and had STDs.

In other words: This is really mature, highbrow stuff that we're talking about here.

Most of the women -- and it is mostly women -- who find themselves the subject of posts on TheDirty are less in the public eye than Jones. The content is submitted by scorned exes, former friends and total strangers. A typical post calls out a woman, using her full name and at least one photo, for either having too much sex or for being unattractive. A recent post headlined, "[Redacted] Should Think About Her Decisions In Life," featured a semi-nude photo of the woman in question, along with this user-submitted gem:

This B*tch right here is [redacted], of Reno. She has been with 7 different guys in the past 2 week and I could not tell you what her total number is. She constantly brags about how drunk she gets a parties and how she sleeps with all these hot guys.

It goes on, but you get the idea.

Some posts name and shame women for allegedly being escorts – or, in the site's charming vernacular, "porta potties." Usually, Nik Richie, who runs the site, weighs in with a one-liner pointing out a highly specific physical imperfection -- like, "muscular back thighs," "sperm eyebrows" or "wrinkles in her wrists." He has zero tolerance for knobby knees, round cheeks or – the horror! -- thighs that touch.

In a running feature on the site, users submit photos of women with the question, "Would you, Nik?" -- as in, "Would you have sex with her?" His answer is almost always -- even when presented with big-breasted, small-waisted model-perfect women -- "no," followed by a critique of, say, her "refund gap" (excessive space between a woman's fake breasts suggesting that she should get a refund from her plastic surgeon). It's sad, it's gross and it's hugely popular: The site gets more than 4 million page views a month.

A similar site, IsAnyoneUp.com, boasts a whopping 30 million page views a month, according to owner Hunter Moore. The site takes the naming and shaming one step further by linking straight to the Facebook page of the person pictured in each post. Unlike TheDirty, Moore is an equal opportunity exploiter -- men and women seem evenly represented in the site -- and he solicits loads of explicit self-submitted snapshots. Moore enthusiastically posts the occasional "gnargoyle" for laughs.

Both men seem to share a similar sense of sexual karma: If you ever take a naked photo of yourself, you deserve to be publicly exposed on the Internet. During a recent appearance on Anderson Cooper's new daytime talk show, Moore told an aggrieved woman who found herself on the site, "Nobody put a gun to your head and forced you to take these photos. It's 2011, everything's on the Internet." He added: "There's one easy way to never end up on my website: Don't take those photos."

Richie similarly sees himself as teaching the unwitting stars of his site a lesson. He sent an email to Jones late last year that read in part, "Anyway, I have a new baby that I need to focus on and trust me -- if she ever ends up on my site, I will give her the same advice I gave you -- try to see it as a learning experience because, ultimately, that's what it is." Clearly, he feels the same way about any sexual behavior -- real or rumored – that gets you on his site. His mantra, surely stolen from some great ancient philosopher, is essentially: Want respect? Stop having sex!

These are the new slut-shamers of the Internet. What's most remarkable is that they manage to be both prudish and NSFW, all at once.