I was eager to be a crunchy mom who swaddled her baby and breastfed. But even I couldn't take this much sanctimony 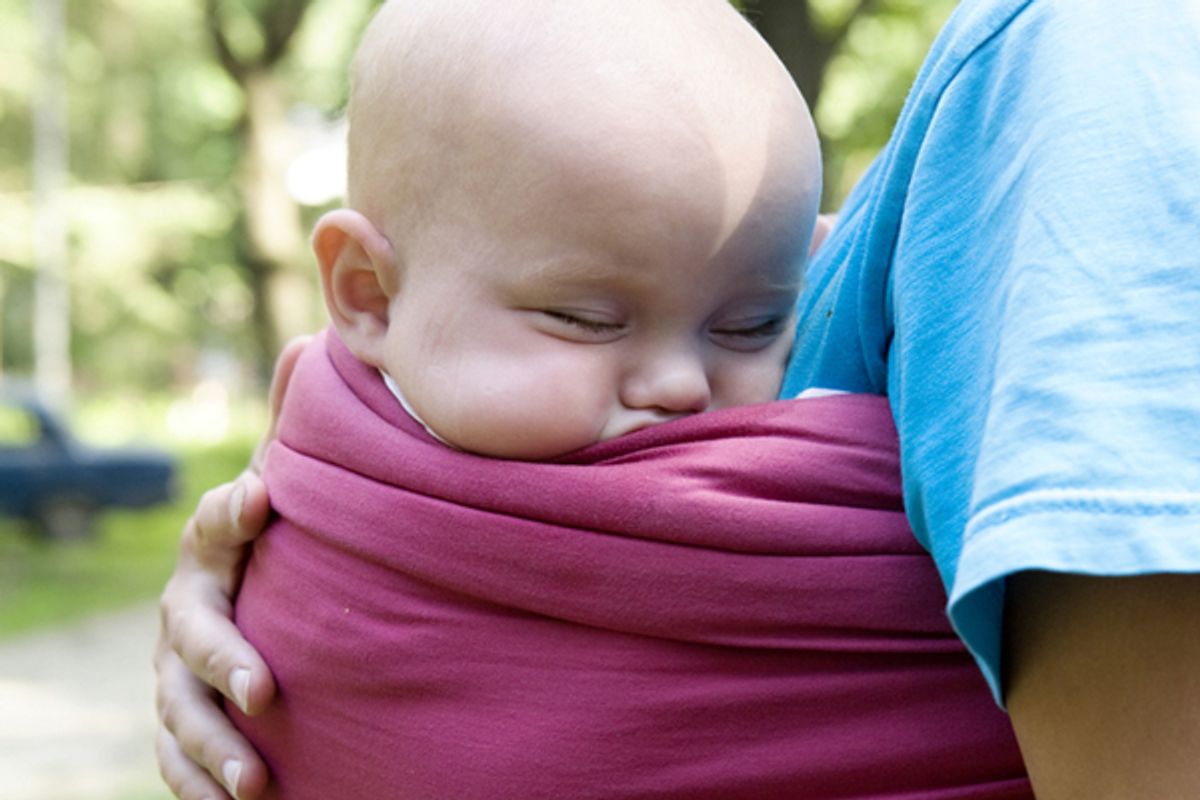 I'm a crunchy person up to a point. I trek to the farmers market every weekend to fill up my recycled-plastic shopping bags with kale and purple cauliflower, but I’ve never made my own reusable fabric toilet paper squares. I’ve sworn off disposable plastic water bottles, but I periodically take my compact fuel-efficient car through the McDonald’s drive-thru for a Snickers McFlurry.

When my daughter was born, I decided I’d be the kind of mother who emphasized bonding and nurturing touch over schedules and order. I pored over attachment parenting manuals and message boards. Versed in the lingo of my new way of parenting, I set out to find like-minded mom friends, the kind of ladies who knew the virtues of calendula.

I sprung for a six-week session of holistic infant care classes. The instructor, a soft-spoken doula, ranked among the hippiest hippies I knew, and that's saying something, since I spent two years living in a Berkeley cooperative. In her ankle-length broomstick skirt, the doula purred out instructions on infant massage and optimal co-sleeping arrangements to a small klatch of mothers and their newborns. It was a relief to find women with whom I could trade tips on swaddling and adjusting our ring slings. The mothers and I got along so well that a few of us continued to gather in a park every week after the class ended. Throughout the spring, we’d take over a sun dappled lawn and let our exclusively breastfed babies dine al fresco.

Within that pacific collective of mothers, I met a woman I’ll call Milo Flynne’s Mom, a woman who seemed to have lost her name the day she hypnobirthed her son. Her outgoing voice-mail message chirped, “You’ve reached Milo Flynne’s Mom and I’m busy attachment parenting, baby-wearing and breastfeeding right now!” Milo Flynne’s Mom always smiled, even when covered in spit up, even when she hadn’t slept in a week, even when new motherhood was turning her insides to mulch. She’d just cock her chin up and recite her mantra: “I’m honored to be married to the most amazing husband in the world, and practicing attachment parenting with our adventurous freedom fighter of a son, Milo Flynne.” I cherished my freedom fighter, too, but I wanted her to admit she was also having bad days. I certainly was having them.

By the time Milo Flynne’s Mom became convinced her craniosacral therapist could cure colic by adjusting the tides of Milo Flynne’s cerebrospinal fluid, I was cluing in to the fact that I might be even less crunchy than I thought. It’s not that I didn’t value the burgeoning bond between my daughter and me, but I couldn’t quite get behind the implied virtue and superiority in attachment parenting circles. None of the other moms were as devoutly natural as Milo Flynne’s Mom, but I was on the far right of this spectrum. If Milo Flynne’s Mom was cultivating a community herb garden in Vermont, then I was a Texan with a concealed weapon permit.

Milo Flynne’s Mom and I did a good job of muffling our mutual disdain, but as our children grew, so did our differences. I tried to cloth diaper my daughter, but found that all that sorting, soaking, hosing and fluffing was getting in the way of my Words With Friends habit, one of the few vestiges of my nonmaternal life that I’d been able to maintain. Milo Flynne’s Mom ostensibly forgave me my disposable diapers, but when changing her son near me, she’d coo to Milo Flynne, “Cloth diapers are sooooo much easier than people realize, you lucky fluffy-bottomed boy!”

When the time came to introduce my daughter to solid foods, I did some research and decided on a moderately priced brand of jarred organic baby food that I could order in bulk online, and I planned to mash up soft fruits and veggies for her when they were available. In contrast, Milo Flynne’s Mom founded a homemade, organic, non-GMO, gourmet-baby-food-making school out of her apartment. While I admired her opportunism in charging clueless new parents $60 to learn how to push the “puree” button on their blenders, I hated that she couched it in judgment of “lazy” parents who would just pop the lid of a “junk food” jar, “lazy” parents like me.

During our group's summer meeting, I whipped out a canister of store-brand cheesy poofs for babies, perhaps the most delicious snack food on the planet for parent and child alike. While offering my cheese-powdered fingers to my daughter to gum, I noticed Milo Flynne’s Mom staring at us and pooping an organic brick. She fished a reusable snack bag from her Fair Trade hand-woven satchel. “Baked kale?” she offered. But what I heard was, “Have you read the ingredients in those things?” All I knew was that they contained cheese and awesomeness, and are the most exquisite “sometimes food” created since Cookie Monster started eating veggies. But as was my way, I said nothing.

At the end of summer, I went back to my teaching job and made the difficult transition to being a working mother. My daughter was only in day care part time, though I worked full time. I wanted to minimize our hours apart, but I usually ended up having to work all weekend to make up for my days home with her. I longed to be able to afford not working like Milo Flynne’s Mom. I started to seriously consider putting on my own baby food seminars just to clear a little cash.

I continued to meet the crunchy moms on the lawn most weeks, sometimes rushing to the park straight from picking my daughter up from day care. One crispy fall afternoon, I dashed up with my baby tucked under my arm like a football and unfurled my blanket just a few minutes before the end of the gathering. I hugged my baby in close, trying to ignore that she smelled of the treacly perfume of her day care teacher, and listened to the mothers chat about working. One said, “I miss my job, but I don’t know what I’d do for childcare.” Milo Flynne’s Mom chimed in, “I like working too, but I won’t leave my baby with strangers,” then shot me an accusing glare.

In hindsight, maybe it was a coincidence that she looked my way, but I didn’t give her the benefit of the doubt. I was as defensive as Milo Flynne’s Mom was devout. Maybe I shouldn't blame her. After a woman has a baby, she is broken down, hazed and then rebuilt in the form of a mother. We were all thin-skinned, sometimes sanctimonious, desperately insecure and prone to flattering ourselves with comparisons to our peers. Then again, she was especially annoying.

I left the lawn, mostly unnoticed. As I buckled my confused baby in her seat, I whispered to her, “Sugar, don’t worry about it. That lawn is covered in pesticides. Let’s go eat some cheesy poofs and watch ‘Yo Gabba Gabba.’”

JJ Keith's essays have been featured in Reader’s Digest, The Huffington Post, TheRumpus.net, The Hairpin, Babble, The Nervous Breakdown, Alternet and other publications. She holds a Master of Professional Writing degree from USC and teaches writing workshops at Unincorporated Education in Los Angeles. She's working on a book called "Stop Reading Baby Books."