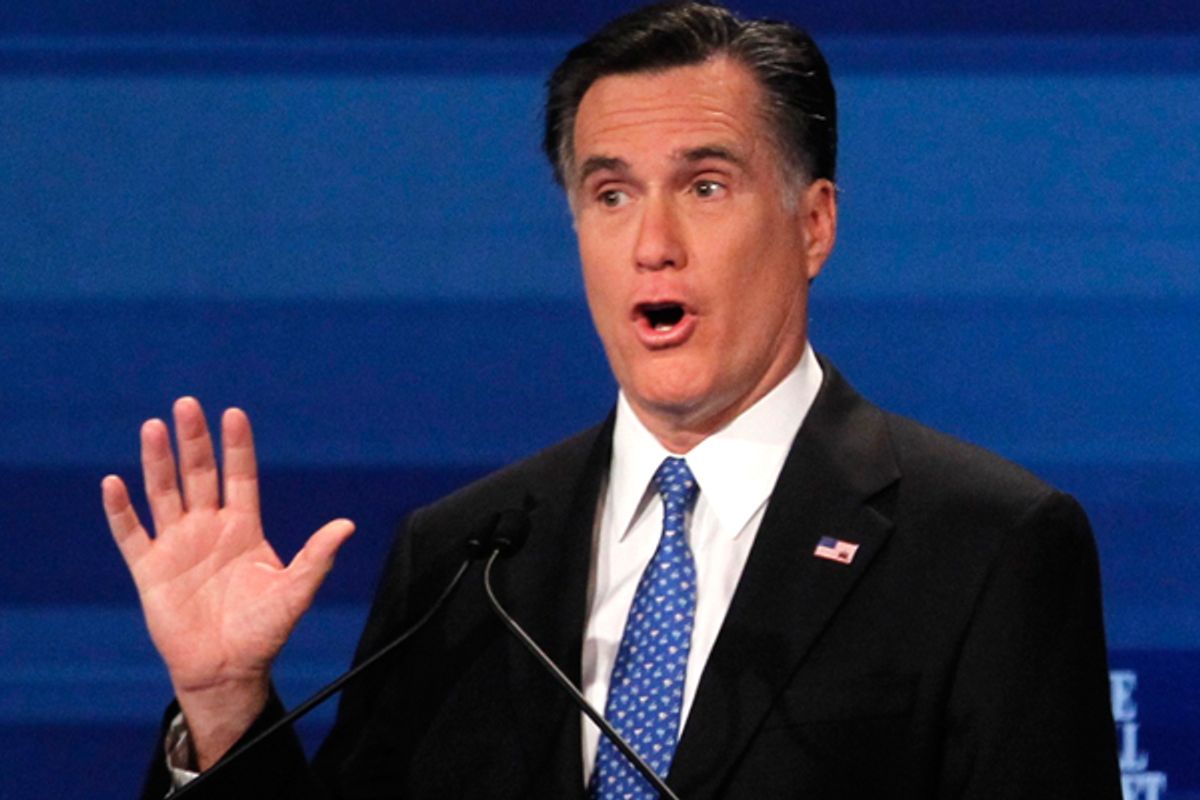 Mitt Romney seemed to buy himself some time when he was asked in Monday night's Republican presidential debate about releasing his income tax returns. The subject was first raised by Rick Perry relatively early on:

Mitt, we need for you to release your income tax so the people of this country can see how you made your money. And — and I think that’s a — I think that’s a fair thing. Listen, here’s the real issue for us, as — as — as Republicans, we cannot fire our nominee in September. We need to know now. So I hope you’ll put your tax records out there this week so the people of South Carolina can take a look and decide if, you know, we’ve got a flawed candidate or not.

But Perry said this immediately after bringing up the closing of a South Carolina steel mill that Romney's venture capital firm had taken over, so when it was his turn to reply, Romney ignored the tax challenge and focused instead on the shuttered mill. Neither Perry nor any of the media panelists followed up. Later on, the Wall Street Journal's Gerald Seib brought up the issue again, and this time Romney was forced to answer. He suggested that custom dictates that presidential nominees wait until tax season in April to release their own records:

I think I’ve heard enough from folks saying, look, let’s see your tax records. I have nothing in them that suggests there’s any problem and I’m happy to do so. I sort of feel like we are showing a lot of exposure at this point. And if I become our nominee, and what’s happened in history is people have released them in about April of the coming year and that’s probably what I would do.

This was significant because the Republican race will almost certainly be settled before April, so Romney was essentially saying that GOP voters would not have a chance to inspect his returns and decide whether there's any cause for concern. Again, both his opponents and the media panelists didn't pursue the topic further.

But a reporter following Romney in South Carolina did on Tuesday morning, asking the candidate point-blank what his effective tax rate is. Romney's reply:

It's probably closer to the 15 percent rate than anything, because the last ten years my income comes overwhelmingly from investments made in the past rather than ordinary income, or rather than earned annual income. I got a little bit of income from my book, but I gave that all away. And then I get speaker's fees from time to time, but not very much.

This, of course, is what many have long suspected -- that Romney, whose net worth falls somewhere between $190 million and $250 million, pays a lower effective tax rate than Americans who bring in a fraction of his income annually. Warren Buffett drew attention to this basic inequity of the tax system in a New York Times Op-Ed over the summer in which he claimed to pay an effective tax rate of just 17.4 percent, a lower share than even his secretary. Since then, Democrats have been touting the "Buffett rule," the principle that the super-wealthy should be subjected to a minimum level of taxation that would prevent them from paying at a disproportionately low effective rate because so much of their income is from investments.

It's never been a secret that President Obama and his fellow Democrats plan to paint the Republican nominee as a protector of the top 1 percent. With his own "vulture capitalism" background, Romney seems particularly vulnerable to this charge. This will be even more true if it can be established that, just like Warren Buffett, he pays a much smaller share of his income in taxes than the average middle-class American.

Romney's public estimate of his tax burden today is one thing; the question now is when we'll know the exact number and see the actual paperwork. Chances are he'll still be able to avoid releasing his records until after he's got the GOP nomination sewn up, but his admission in South Carolina today gives the media more reason than ever to stay on his case. Sooner rather than later, we'll be seeing his tax returns.