The fight to save the American dream

It's not "class warfare." People have just realized how extreme inequality is wrecking our country 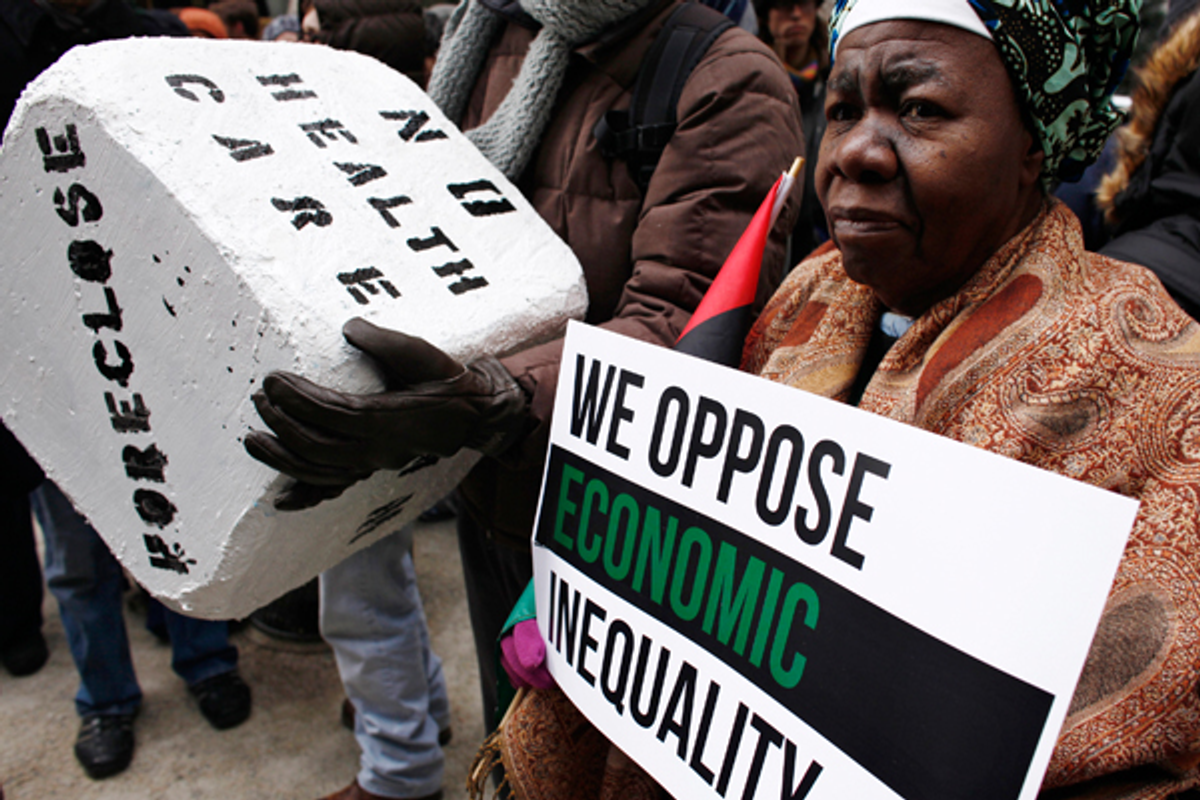 If you’re part of the one percent, even getting fired comes with a cushion made of eiderdown. GMI, a research company that gets paid to keep an eye on such things, just issued a study headlined, “Twenty-One U.S. CEOs with Golden Parachutes of More than $100 Million.” That’s each.

The report’s authors, Paul Hodgson and Greg Ruel, write, “These 21 CEOs walked away with almost $4 billion in combined compensation. In total, $1.7 billion in equity profits was realized by these CEOs, primarily on the exercise of time-vesting stock options and restricted stock.”

This news came the same day as another report, this one from Indiana University, titled, “At Risk: America’s Poor during and after the Great Recession.” Its researchers conclude, “The number of people living in poverty is increasing and is expected to increase further, despite the recovery. The proportion of people living in poverty has increased by 27 percent between the year before the onset of the Great Recession (2006) and 2010… Poverty is expected to increase again in 2011 due to the slow pace of the economic recovery, the persistently high rate of unemployment, and the long duration of spells of unemployment.”

In fact, the white paper finds that we now have the largest number of long-term unemployed people in the United States since records were first kept in 1948 -- four million report they’ve been unemployed for more than a year. Not necessarily counting the former CEOs gently floating to earth from those golden parachutes.

So no, Mitt Romney, when we say that Americans are waking up to the reality that inequality matters, we’re not guilty of “envy” or “class warfare,” as you claimed to Matt Lauer on NBC’s "Today." Nor are we talking about everybody earning the same amount of money -- that’s the straw man apologists for inequality raise whenever anyone tries to get serious.

Neither one of us grew up wealthy, but we went to good public schools, played sandlot ball at a good public park, lived near a good public library, and drove down good public highways -- all made possible by people we never met and would never know. There was an unwritten bargain among generations: We didn’t all get the same deal, but we did get civilization.

Now the bargain’s being shredded. The people we met from Occupy Wall Street get it -- you could tell from their slogans. One of the younger protesters wore a T-shirt emblazoned with the words: “The system’s not broken. It’s fixed.” That’s right -- rigged. And that’s why so many are so angry. Not at wealth itself. But at the powerful players who win by fixing the game instead of by honest competition; at the crony capitalists who resort to tricks, loopholes, and cold cash to make sure insiders prosper -- and then pull up the ladder behind them.

Americans are waking up to how they’re being made to pay with for Wall Street’s malfeasance and Washington’s complicity -- paying with stagnant wages and lost jobs, with slashing cuts to their benefits and social services. To how our financial system profits by moving money around in exotic ways instead of supporting real economic growth. Waking up to the ludicrous Supreme Court decision defining corporation as a person, although it doesn’t eat, breath, make love or sing -- or take care of children and aging parents. Waking up to how unlimited and often anonymous campaign contributions corrupt our elections; to the fact that if money is speech, no money means no speech. As one demonstrator’s sign read: “I couldn’t afford a politician, so I bought this sign.”

So while police have cleared many Occupy encampments, a collective cry, loud and clear, has gone up from countless voices across the country: Enough’s enough.

We won’t know for a while if what we’re hearing is a momentary cry of pain, or whether it’s a movement -- like the abolitionists and suffragettes, the populists and workers of another era, or the civil rights movement -- that gathers forces until the powers-that-be can no longer sustain the inequality, injustice, and yes, immorality of winner-take-all politics and a winner-take-all economy.