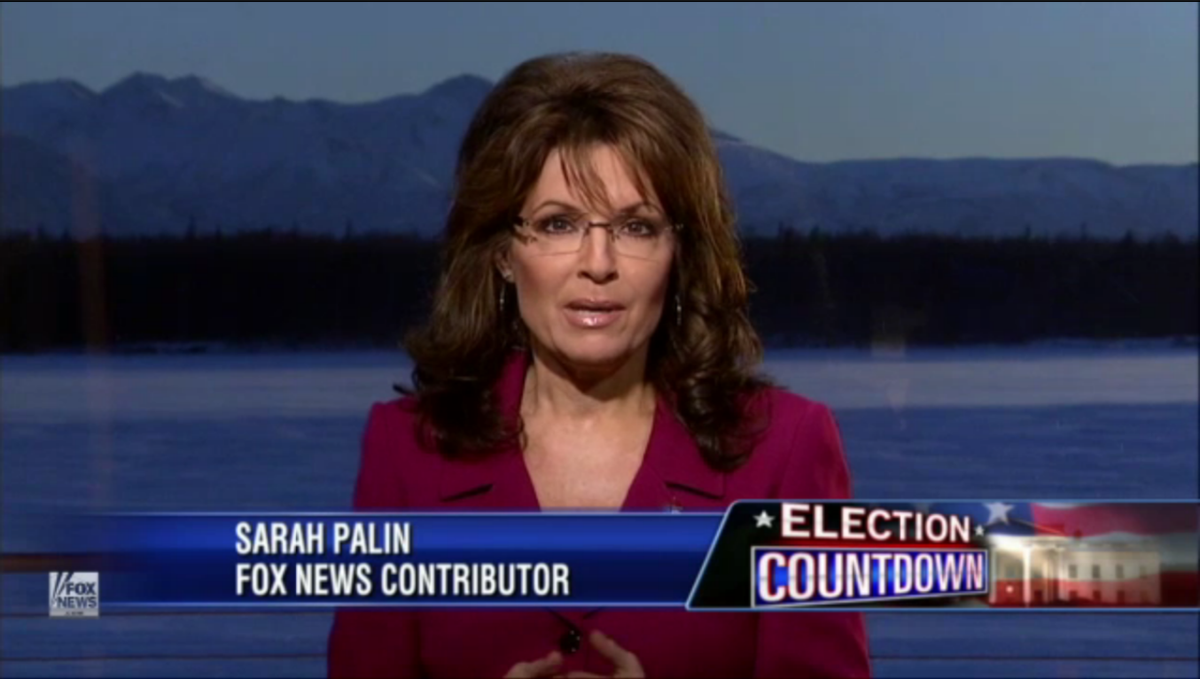 The cynical interpretation of Sarah Palin's very qualified endorsement of Newt Gingrich Tuesday night is that she's playing it safe: Sure, she has little regard for Mitt Romney, but she also recognizes that he's in the catbird seat, needing only a win this Saturday in South Carolina (where polls show him ahead by double-digits) to all but clinch the nomination.

Palin made her remarks during an appearance on Sean Hannity's Fox News show. She argued that a protracted GOP contest would be good for the party because "iron sharpens iron, steel sharpens steel" and that "these guys are getting better in their debates, they are getting more concise, they’re getting more grounded in what their beliefs are and articulating what their ideas are to getting the country back on the right track and getting Americans working again."

“If I had to vote in South Carolina," Palin said, "in order to keep this thing going I’d vote for Newt, and I would want this to continue."

This smacks somewhat of a preemptive attempt at face-saving. After all, the perception that she enjoys significant influence among the GOP rank-and-file is important to Palin's brand, which adds some risk to any high-profile endorsement she makes. So if she were to go all-in for Newt right now only to see him lose badly on Saturday, it would be easy for the press and her critics to tout the result as proof that no one cares what she has to say anymore. But this way, she gets to spread the word that she prefers Newt and would like to see Romney stopped while building in all sorts of excuses if Palmetto State Republicans don't play along.

This doesn't mean her move won't have an impact, though. While Romney does hold solid leads in South Carolina, he seems to be benefiting from divided conservative opposition, with Gingrich and Rick Santorum each struggling to be regarded as the right's default non-Romney option. Gingrich has the slight upper hand because he's polling better than Santorum in South Carolina, but he needs to forge a clear break between now and Saturday to have a chance at beating Romney.

His performance in Monday night's debate was a step in that direction. Gingrich's exchange with Juan Williams (which his campaign quickly turned into an ad) attracted considerable attention and praise from conservative opinion leaders. Rush Limbaugh, for instance, who remains unwilling to express a candidate preference in the GOP race (perhaps because of what happened last time), told his listeners that Gingrich had "swung for the fences and hit a grand slam." Combined with the absence of similar enthusiasm for Santorum, these favorable reviews should help convince some South Carolina Republicans that Gingrich is the most viable non-Romney option.  Palin herself cited the debate during her "Hannity" appearance, and as qualified as it is, her endorsement should have a similar effect, especially given the press coverage it will receive.

The question is whether other prominent conservatives will echo Palin's call. The stakes of Saturday's primary are clear; the race is basically over if Romney wins. How many other opinion-shaping conservatives really don't want to see Romney crowned so early and so easily, even if they aren't particularly crazy about the alternatives? Will they step forward in the days ahead and use their voices to ask South Carolina Republicans to keep the process going just a little bit longer by backing Gingrich?

Even if Palin gets her way, of course, a South Carolina loss will probably be little more than a speed bump for Romney. He's running far ahead in the next state (Florida), his support in national GOP polls is now reaching over 40 percent -- a mark he couldn't come close to for all of 2011 -- and he has the organization and resources to compete in every contest on the calendar, no matter how expensive. It really does seem like just a matter of time before he has the nomination in hand.

In that sense, a less cynical interpretation of Palin's endorsement is possible. Maybe she's just like the GOP masses who flirted with one non-Romney candidate after another in the last year, always walking away in disappointment for one reason or another, only to look up in January and realize that the time to find a suitable alternative had run out.